Addiction and Responsibility (Part One) 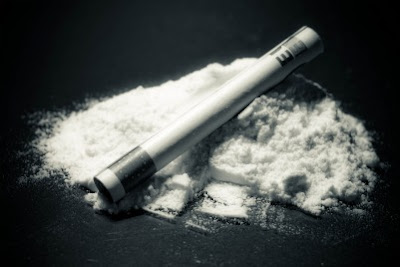 When it comes to assessing the impact of addiction on responsibility, there’s a longstanding debate between two schools of thought. The first, which we might call the “Moral Failing” school, holds that addiction does nothing to lessen responsibility: an addict is someone who exhibits a lack of moral virtue, and so they should not be excused from responsibility. The second, which we might call the “Disease” school, holds that addiction is an action-related disease and, as a consequence, we cannot hold addicts responsible for what they do.

In a recent article entitled “Lowering the Bar for Addicts”, Gideon Yaffe argues that both schools of thought are wrong. Addicts are neither completely responsible, nor completely absolved. Instead, he argues that there is a middle ground, which holds that an addict “should be given some kind of break but not excused entirely.” In essence, this middle ground consists of two theses (the names are mine, not Yaffe’s):

Unreasonable Compliance Thesis: An addict is not responsible for violating a norm if in order to comply with that norm they must cede control of their behaviour to something that is independent of their decision-making capacities.


Substitution Thesis: In cases where standard norm-compliance would be unreasonable for the addict, there is usually a lesser norm that the addict can be held responsible for violating.


The first thesis is so named because Yaffe’s argues that the reasonability of the burdens associated with norm compliance plays a key role in our assessments of responsibility. The naming of the second thesis should apparent.

In the remainder of this post, I will focus on the first part of Yaffe’s defence.


1. Duress and Unreasonable Burdens
An argument that is sometimes mooted is that an addict’s responsibility is undermined because they are under duress. This raises the obvious question: what is duress? Put simply, duress is a defence to a criminal charge. Duress arises when a person is put in a situation in which they are forced to choose between violating a norm (i.e. commit a crime) and doing something that seems to place an unreasonable burden on them. In practice, it is quite difficult to prove, but it is still generally recognised as having the power to excuse.

An example will be helpful at this point. In the English case of R v. Hasan (2005) the defendant pleaded duress to a charge of burglary. He alleged that a violent drug dealer had threatened to harm both himself and his family if he did not carry out this burglary. This is a classic example of duress: D, or someone close to D, is threatened with being severely harmed unless D commits a crime. As it happened, the defence was not successful in this case. The court found that D had voluntarily associated with the drug dealer and would reasonably have expected to be threatened or compelled by them at some point. In other words, the court found that if you voluntarily put yourself in a situation in which you are likely to be placed under duress, you cannot avail of the defence.

The court’s conclusion might provide an interesting lesson for those who argue that addicts are under duress, but we shall not dwell on that here. There are other, deeper, problems with that view. To see what these are we need to map out the basic structural features of duress. Basically, duress arises when the following conditions are met: (i) a person is (involuntarily?) confronted with a decision problem; (ii) in that decision problem they have a choice between complying with a norm, and not complying with a norm; and (iii) there is a heavy, arguably unreasonable, burden attached to compliance with the norm. So even though the person had a choice of whether or not to comply, we think they are excused for their non-compliance because of the unreasonable burden. This gives us the following principle:

Duress Principle: If D is faced with a choice between norm-compliance and non-compliance, and if there is a heavy, unreasonable burden associated with compliance, they can be excused for failing to comply with the norm.


This principle isn’t perfect, by any means. I think it would need to be qualified and refined in a number of ways before it became satisfactory. However, for the time being, let’s assume its accurate and see what follows. For ease of analysis, the structural elements of duress are represented in the diagram below. The diagram uses the case of R v. Hasan for illustrative purposes, but ignores the issue of voluntary association that arose therein. 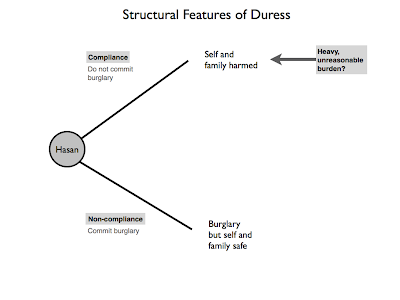 2. Addiction and Duress
From the preceding analysis, it would seem that in order for the claim that addicts are under duress to be borne out, we would need to locate some heavy burden that makes norm-compliance unreasonable for them. What might this be? Yaffe considers the suggestion that the burden in question is that of withdrawal. In this context, “withdrawal” is a general term given to a complex of symptoms experienced by addicts once they withdraw from consumption of their preferred substance. If we compare non-addicts to addicts, we find that the latter are (sometimes) faced with a choice between norm-compliance plus withdrawal, and non-compliance, whereas the former are not. For instance, a heroin addict might be forced to steal in order to feed their addiction; they have the option of not-stealing, but if they chose it they would be forced to bear the burden of unpleasant withdrawal symptoms. Non-addicts have no similar burden attaching to compliance.

This leads to the following argument:


Is this a plausible argument? Is an addict really under duress because of the burden of withdrawal? Yaffe detects three flaws in this line of reasoning.

The second problem is that addiction seems to affect responsibility even when an addict violates a norm that has nothing to do with drug use. He gives the example of a heroin addict who has a $30 a day habit, and who calls on family favours to secure himself a job that pays $130 a day (not too shabby for a heroin addict). However, he cannot perform his duties at work competently or efficiently, and he is fired. He has violated a norm (perhaps a social one, but also a legal/contractual one). Yaffe suggests that his addiction surely has some role to play in this, and although we may think he still deserves to be fired, it nevertheless seems to affect the degree to which we hold him responsible for being fired. In this example, addiction plays a part in our responsibility assessments, but that part has nothing to do with the fact that the addict faced a stark choice between non-compliance and withdrawal. Indeed, quite the opposite since the job would have helped him feed his habit.

The third problem is that to say that an addict is under duress is a mischaracterisation of how they make decisions. If the addict chooses to violate a norm in order to (say) steal money to feed their addiction, they are not acting so as to avoid withdrawal symptoms. Instead, they are acting because they enjoy, or derive pleasure (or simply need) the drugs, “avoiding withdrawal symptoms” does not really figure among their motivations. This stands in stark contrast to the man who commits a burglary in order to avoid harm to himself or his family. There, the primary motivation for non-compliance comes from the heavy burden of compliance; in the case of the addict, the primary motivation comes the attractive features of non-compliance. There is something Frankfurter-esque in this line of reasoning, and it chimes with certain intuitions and theories we have about what makes someone responsible. Roughly, how they perform an act seems to count for more than what might have happened if they failed to perform the act.

If this right, then this duress-based analysis of addiction and responsibility fails. Reasonable expectations and burden-sharing play important roles in how we understand responsibility, but addicts cannot be excused simply because they are under the burden of withdrawal symptoms. If they are to be excused, some other rationale must be sought. We’ll find out more of Yaffe’s thoughts on this rationale in the next post.
Posted by John Danaher at 10:31 PM