Solum on the Normative Arguments for Originalism (Part One) 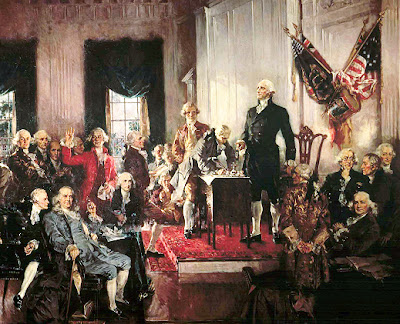 In an earlier post (link is above) I looked at the theory of constitutional meaning known as semantic originalism. This theory maintains that the semantic content of a constitution (presumably any constitution although the focus is on the US constitution) is fixed by the public meaning of its clauses at the time of ratification. This theory has been developed to its most sophisticated form by Lawrence Solum and in the earlier post I addressed some of Solum’s arguments in its favour.

But, of course, the debate doesn’t end there. Even if it is true that the semantic content is fixed in this manner, it does not follow that we ought to respect it. So originalists need to go further and try to present good reasons for respecting the original public meaning of the constitution. Over the next two posts I want to take a look at some of those reasons.

Once again, I shall call upon Solum’s discussion of originalism in the debate book Constitutional Originalism. I have noted before that this book doesn’t contain the most elaborate defence of Solum’s theory. For that, you need to go to his article/monograph “Semantic Originalism”. Nevertheless, when it comes to the normative arguments for originalism, the debate book may have an advantage over the article. To me, at any rate, it lays out the arguments in a crisper and more emphatic manner than the article does. Still, Solum is somewhat half-hearted in his discussion of the normative arguments in the article, since his primary focus there is on the semantic thesis. Better arguments can be found elsewhere, but this is at least a start.

In the remainder of this series I’ll look at two of the normative arguments Solum uses to defend originalism. They are the popular sovereignty argument and the rule of law argument. I’ll roughly follow the presentation in the book (pgs. 36-54), but will also feel free to elaborate on the arguments presented therein and to offer some critical commentary as I go along. Bear in mind throughout this series that the goal of each argument is to defend something like the following proposition: “we ought to interpret the constitution in accordance with its semantic content (which is fixed by the original public meaning of its clauses)”. This proposition is assumes that Solum’s semantic thesis is correct and that is an assumption we shall share throughout.

This post will focus on the popular sovereignty argument. The rule of law argument will be discussed in part two.


1. The Popular Sovereignty Argument
That the popular will should be respected seems like too obvious to state. To the extent that we are committed to democratic governance — and I shall assume such a commitment here — it would seem like the law ought to both respect and implement the popular will. Solum sums this up by reference to what we might call “Lincoln’s Principle”:


Now, that’s probably not the most philosophically sophisticated way of expressing the core principle of popular sovereignty, but it’s enough to get the gist of the idea. The key question now is how this can be used as the basis of an argument in favour of originalism. The simplest argument, and the one I think is implicit in Solum’s comments (pg. 42) is the following:


As I said this is pretty simple. Premise (1) just states the core principle of popular sovereignty. Premise (2) is slightly trickier. I think it is fair to say that people express their wills by appealing to the semantic content of conventional signs and symbols, but it’s not right to say a priori that a constitution expresses the will of the people. After all, it’s possible for a constitution to be drafted and ratified by a dictator. So premise (2) can only be true of particular constitutions drafted in a particular manner. The particular constitution that Solum focuses on is, of course, the U.S. constitution. And he thinks there are good historical reasons for thinking it really did express the will of the people when they ratified it (we’ll get back to those historical reasons in a moment).

But this point — that the constitution was an expression of the will of the people at the time of ratification — presents a problem for the defender of originalism. The problem is this: premise (1) and (2) are ambiguous as to which people’s will needs to be respected. I presumes that premise (1) is referring to the people who are currently alive and kicking; but then premise (2) — if assumed to be a statement about the U.S. constitution — is surely referring to people who live over two hundred years ago. If the ambiguous temporal references are removed such that we have the following premises:


But if we have these two premises, then the conclusion (3) no longer follows. It is certainly possible that the will of the people living in 1789 is the same as the people living in 2012, but this cannot be taken for granted. In other words, if we want to respect the current will of the people, we would have take positive steps to ensure that this was happening each generation (e.g. by going through a new constitutional convention). We couldn’t just assume that nothing had changed. This suggests that legislation, which is enacted to popularly elected representatives, might be a better legal mechanism for respecting the will of the people than a constitution.


2. Shoring Up the Popular Sovereignty Argument
Solum has a response to this objection. It is, however, a little…odd. I’ll do my best to do justice to his reasoning here. For those who want to check up on me, the relevant passage of Constitutional Originalism is on pgs. 42-43.

Solum’s argument is that there is an important sense in which the constitution of 1789 is more representative of the popular than contemporary legislation. As he sees it, the problem is that legislation is enacted by popularly elected officials and, to quote from the man himself:

“In a representative democracy such as ours [i.e. the US], political institutions are (at best) an imperfect reflection of the true preferences of the citizenry. The majority of citizens do not vote. Those who do vote are frequently unaware of the likely consequences of their ballots. Special interests dominate ordinary politics through lobbying, campaign donations, and the weak institutional structures of many legislative and executive institutions. The political branches are truly political, but that does not imply that they are deeply democratic. (pg. 43)”


I have no reason to doubt this claim. Certainly, the popular representations of the U.S. political system (in news media primarily) seem to bear this out. But just because the current situation is no good does not imply that the original enactment of the constitution was any better. Solum needs to provide additional evidence for this. As it happens, he does not do this. Instead, he simply asserts that “[b]y contrast, the Constitution was adopted through an intensely democratic process.” To be fair to him, providing an exhaustive history of the drafting and ratification process would be inapposite in a book like this, and there are some historical considerations (possibly well-known to the book’s target audience) that bear him out. Chief among them being the supermajoritarian process of ratification. But there are also some historical considerations that contradict that point, e.g. the absence of women, African-Americans, and men who did not meet the property qualification, from the process,. Solum acknowledges these flaws, but thinks they do not outweigh the positive aspects of the process. My feeling is that they cannot be so easily dismissed. However, I’m going to take up that line of criticism in a later post on a different article. Stay tuned.

Leaving that to the side for now, I’m going to suggest that there are still some troubling tensions in Solum’s line of reasoning. But first, I’m going to try to formalise his argument. I think the following does some justice to the position:


What to say about this argument? There are at least three significant flaws.

The first is that the argument doesn’t get the defender of originalism to where he/she needs to be. Remember, this counterargument is supposed to be helping them to defend the overall conclusion (3) that we ought to respect the original public meaning of the constitution. But this particular argument provides no support for that claim. The constitution may well be better at representing the popular will than legislation, but that does not imply that we ought to respect it. We could have good reasons for rejecting both legislation and the constitution. The least bad theory does not necessarily win out. For it to do that, we’d need to show that no other system for enacting the popular will is: (a) possible; and (b) capable of doing a better job.

The third flaw is that the argument seems to shoot itself in the foot. Solum is claiming that the current political system is imperfect in giving voice to the popular will. But surely the constitution itself must take a large portion of the blame for this? After all, one thing that the constitution does is to set up the political institutions that are currently failing us. (Speaking as a non-citizen and non-resident the use of the word “us” may be inappropriate but it just sounded nicer…) That’s not to say there aren’t other social and cultural pressures responsible for the current problems, but the fact that those pressures have the effect they do suggests, once more, that there might be a flaw in the original constitutional framework. Thus, to use the failures of the current legislative system to endorse the constitution seems self-defeating.

Solum tries to respond to this critique by offering some reasons for thinking that current legislation does a worse job of representing the popular will than the constitution did when it was drafted and ratified. But this argument has three significant flaws. It does nothing to support originalism since the least-bad system does not win by default. It does nothing to address the past vs. future problem raised by the critique. And it seems self-defeating since the constitution is partly to blame for the problems with the current system.

We’ll look at the rule of law argument the next day.
Posted by John Danaher at 11:46 PM