The Ethics of Pre-Punishment (Part Two) 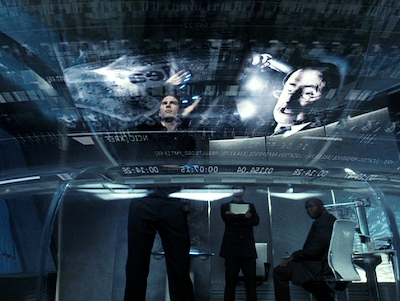 This series of posts is looking at the ethics of pre-punishment. That is, at the moral propriety of punishing people for crimes that they have not yet committed, but will. This scenario has been popularised by the film (and short story) Minority Report, but it has been considered by philosophers as well. Furthermore, it is arguably a common practice in many parts of the world today where it masquerades under the title “preventive detention” so this is an issue of some practical import, though there may be some distinctions to be drawn between prepunishment and preventive detention.

In part one, I looked Christopher New’s argument in favour of pre-punishment. New argues for two theses, which I formulated in the following manner:

Temporal Neutrality Thesis: It is morally acceptable to punish people both before and after the commit a crime, provided we know (or believe beyond a reasonable doubt) that they will commit the crime.


Epistemic Constraint Thesis: The only thing that really prevents us from prepunishing people is that we usually lack proper epistemic access to future crimes.


New supported both theses with a thought experiment in which a man named Algy was fined for speeding before he actually sped. The fine looked to be morally acceptable because it was known (beyond a reasonable doubt) that Algy was going to commit the offence. Thus, it looked like pre-punishment was, at least in some cases, morally acceptable.

In this post, I do two things. First, I outline Saul Smilansky’s objection to New’s temporal neutrality thesis. And second, I outline New’s response to Smilansky. This is based on two articles from the journal Analysis, entitled “The Time to Punish” and “Punishing Times: Reply to Smilansky”, respectively. The wit of philosophers shines through in those titles.


1. Temporal Imbalances and Determinism
Smilansky accepts many of the key premises in New’s argument. For instance, he accepts that the pre-punishment scenario is most interesting from a non-consequentialist perspective (on the morality of punishment). This is because consequentialist theories seem to provide obvious resources for supporting punishment of the innocent, so it’s no great surprise to learn that they support pre-punishment. Furthermore, he accepts New’s epistemic claim that we can have proof beyond a reasonable doubt about future crimes. Thus, epistemically speaking, our judgments about pre-punishment and post-punishment could be on a par.

Where Smilansky disagrees with New is in the morality of pre-punishment from a non-consequentialist perspective. As I outlined at the end of part one, New’s main reason for thinking that pre-punishment is unobjectionable from a non-consequentialist perspective is derived from retributivism. As he sees it, retributivism justifies punishment on the grounds that it achieves moral balance: for every culpable wrong performed by X there must a corresponding harm imposed on X. But retributivism says nothing about the timing of the moral balance. True, in most cases we will not be aware that an imbalance has been created until after the fact so we won't be able to correct it until then, but if we are aware that it will be created in the future, acting pre-emptively to restore the balance is acceptable. This is depicted in the timeline below which depicts Algy’s punishment for speeding. 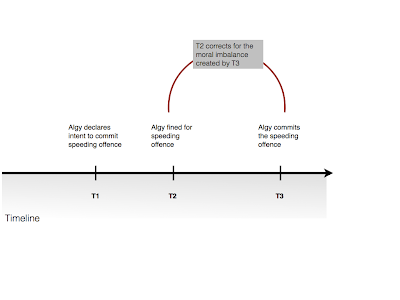 As you can see, Algy creates a moral imbalance at T3, but that imbalance is corrected at T2. Thus the state of affairs covering the events from T1 to T3 is morally balanced. The same thing could have been achieved by punishing Algy after T3, but from a moral perspective this does not matter. Morally speaking, punishment is justified on temporally neutral grounds.

Smilansky rejects this reading of the situation. He argues that there’s more to punishment than achieving moral balance. Another key justifying criterion for punishment is whether it respects persons as agents with responsibility for their actions. As agents, people have the moral capacity to make decisions for themselves. This includes a capacity to refrain from performing previously intended actions. In other words, Smilansky rejects New’s overly linear reading of the timeline in favour of a branched reading of the timeline. The branches in this timeline represent the moral opportunity to change one’s mind. This is represented for Algy below. 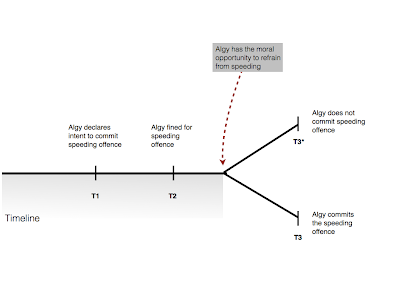 Smilansky’s argument is that pre-punishing Algy is objectionable because it fails to respect his moral capacity to refrain from speeding. He argues that this is also part of what makes punishing the innocent so objectionable: it fails to respect people for the choices they have made and can make. It treats them merely as a means to a more desirable end, not as morally autonomous agents capable of creating and following their own ends.

Obviously, Simlansky’s argument is tied to a particular view of the free will and determinism debate. The branching timeline that he envisages for Algy would make no sense for a hard determinist (one who believes there is really only one possible future). But, Smilansky argues, hard determinists would have a hard time justifying punishment anyway since on their worldview concepts of guilt and innocence seem to fall away. So maybe this whole dialectic is not for them; it is only for those who accept the morality of punishment. And for them, Smilansky claims, pre-punishment should be deemed unacceptable for the reasons just stated.


2. New’s Responses
New offers three responses to Smilansky’s respect argument. The first is that Smilansky’s argument could only supply justifying conditions for the punishment of actual persons, not juridical persons like corporations. New thinks that punishment of juridical persons is permissible for reasons that have nothing to do with their moral agency. Corporate agents do not have the same kind of agency as ordinary persons.

This is difficult claim to evaluate, particularly given that New spends very little time discussing it. He seems to throw it out as a possibility, and leave it at that. List and Pettit’s recent book Group Agency offers what I think is the best available discussion of corporate agency and responsibility and could be used to develop this argument. I haven’t conducted an in-depth study of the book, but as I read them List and Pettit argue that it is indeed possible to hold corporate agents responsible (like New seems to think) but that this is only because there are sufficient analogies between the conditions for individual responsibility and corporate responsibility. Thus, it may be that, contrary to what New argues, the punishment of juridical persons relies on similar agency conditions to those discussed by Smilanksy. In particular, it may rely on some close analogue to the capacity to refrain from certain actions.

New’s second response to Smilansky’s argument is rather meatier and, I think, more persuasive. New agrees with Smilansky that any theory of punishment will need to include some respect for persons as agents. He just disagrees that respecting persons agents necessarily involves respecting the possibility of them refraining from certain actions. As he sees it, if someone like Algy has declared an intention to perform a certain action and that action normal attracts punishment, we can respect him by assuming he will carry out his intention. Indeed, isn’t this more respectful than what Smilansky demands?

Smilansky’s respect for the capacity to refrain seems tantamount to assuming weakness of the will on the part of Algy, i.e. to assuming he won’t follow through on his declared intent. But weakness of the will undermines moral agency, so why should we respect it? I’ve no doubt Smilansky could respond by distancing his brand of respect from the problem of akrasia, but even if he manages this, the respect argument ends up a draw: it could just as easily support New’s position as it could Smilansky’s.

New’s final response is offer independent support for the temporal neutrality thesis. This support is provided by way of analogy with the obvious corollary of punishment, namely: reward. New asks us to imagine the Japanese government giving military honours to Kamikaze pilots before they flew on their fatal missions. Although we obviously don’t approve of such missions, New nevertheless asks us: is there anything deeply incoherent or problematic about pre-rewarding people in this manner? He thinks not. And since punishment is just the flipside of reward, there’s nothing problematic or incoherent about pre-punishment either.

This is an interesting argument, and one that I wish New developed in more detail. It is often annoying how the morality of rewarding is often left out of discussions of responsibility and punishment, despite its obvious connections to such discussions. New is to be commended for drawing out attention to it. Still, there are those who would question his assumption of symmetry between punishment and reward. I’ve certainly come across some who argue that our criteria for rewarding someone are justifiably laxer than our criteria for punishment, and that this is partly attributable to asymmetrical way in which we treat harm and benefit. We typically have much higher moral standards for avoiding harm than we do for securing benefit. Since punishment is a harm, it seems reasonable to suppose we have higher standards for its imposition than we do for reward.

Okay, that brings us to the end of this post. So far we’ve looked at the exchange between New and Smilansky. In the next post, I’ll branch out and consider the views of Roy Sorensen, who like Smilansky rejects the propriety of pre-punishment, but for a slightly different set of reasons.
Posted by John Danaher at 11:44 AM