Can death be a fitting punishment? 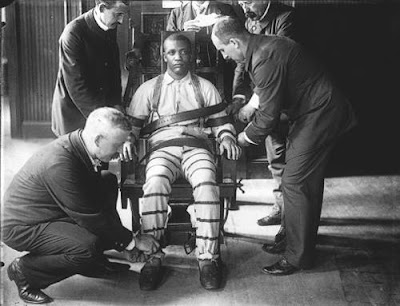 This post is going to be about death, retribution, and the relationship between the two. It’s the last post I’m going to do on the philosophy of punishment for a while, but it deals with a significant claim that I’ve danced around in previous posts without addressing head on. What is that claim? It is the claim, common to at least some retributivist defenders of capital punishment, that death is the appropriate punishment for certain kinds of crime (most obviously: murder). But is this right? And how do we decide?

To set things up, we need to consider the basic thesis of the retributivist, which I’ll summarise as follows:

Retributivism: If a person engages in a culpable wrong of type X, then it is right and proper (perhaps obligatory) for them to be punished in a manner that befits that type of wrongdoing.


There are two key parts to this thesis. The first is the notion that punishment is intrinsically good. That is: good irrespective of its broader consequences. This is why it is right and proper (perhaps obligatory) to punish those who engage in culpable wrongdoing. The second is the notion that punishment must satisfy some fittingness-relationship. That is, to use a common formulation: the punishment must fit the crime (note “crime” is perhaps a little narrow since retributivism could cover all types of wrongdoing not just criminal wrongdoing, but that’s by-the-by since we will be focusing on criminal wrongs in the remainder of this post).

It is this second part of the retributivist thesis that I want to focus on today. For it is this part that motivates retributive justifications of the death penalty. Only if death is the fitting punishment for particular crimes will it be right to recruit retributivism in support of capital punishment. But there’s an immediate problem here: the notion of a “fitting punishment” looks to be somewhat vague. To justify their defence of the death penalty, retributivists will need provide some specification of the fittingness-relationship between a crime and a punishment that clearly implies that death is the appropriate punishment. Can they do this?

In the remainder of this post, I’ll try to answer this question by looking at two specifications of the fittingness-relationship. The first — called the “punishment-in-kind” version — is generally thought to be unacceptable even though it could justify the death penalty in particular cases. The second — called the “qualitative matching” version — looks to be more morally acceptable, but it faces problems of abstraction that weaken it’s ability to support the death penalty. And although I’ll refrain from drawing any broader implications from this, it does suggest that a retributivist might (a) struggle to justify the death penalty; or (b) consistently reject it.

[Source Note: This post is cobbled together from a variety of sources and personal reflections on the topic, but is heavily indebted to Jeremy Waldron’s article “Lex Talionis”]


1. The Punishment-in-kind Version
Here’s the first attempt to refine the fittingness-relationship:

Punishment-in-kind Principle: If a person engages in a culpable wrong of type X, then the fitting punishment is for a wrong of type X to be visited upon them.


The use of the word “type” is significant in this definition. In act theory, there is a distinction drawn between act types and act tokens. Roughly, an act type is a general classification or description, whereas an act token (or tokens) is a particular performance of an act type. To give an example, “buying a house” is a general act type, which is performed by the specific act tokens of me taking out a mortgage with my bank, and signing various contracts on a particular day. The same act type could be performed in myriad different ways by different people and at different times.

Some of the subtleties are irrelevant here. The important point is that the punishment-in-kind principle says that whenever a person performs a token of a particular general type of wrong, the same type of wrong must be performed to them. This seems to provide obvious support for the death penalty, at least on some occasions. If A stabs B to death, or if A shoots B, then A has performed the wrong of killing another. Therefore, by the punishment-in-kind principle, the fitting response is for them to be killed. Simple as that, right? The basic logic is illustrated in the diagram below. Two different murders are grouped within the same act type (which is clearly morally wrong) and therefore warrant the same response. 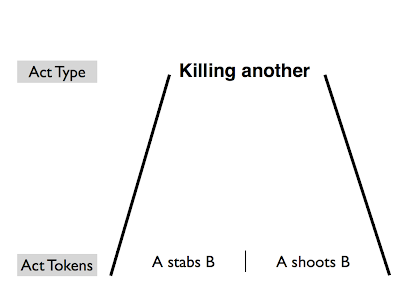 The problem is that the punishment-in-kind principle seems to lead to both practical and moral absurdities. Consider, for instance, the serial killer who has killed multiple people. Is the fitting response for them to be killed, revived and killed again for the relevant number of times? This would seem infeasible (though one could imagine a crude analogue in which the person has their heart stopped for a few minutes, before being revived and undergoing the process again). What about the killer who tortured his victim first? Should he be tortured and then killed? Or how about the rapist, should he be raped as punishment for his wrongdoing?

Superficially, the punishment-in-kind principle seems to warrant these responses. But this is surely absurd. A system of punishment that followed the principle to these extremes would seem unwarranted and downright inhumane. Nobody in their right mind could think it intrinsically good for the government to subject serial rapists to multiple rounds of rape.

So goes the standard objection to the punishment-in-kind principle. It leaves the retributivist with two options. Either bite the bullet and accept these troubling implications, while at least preserving their ability to justify the death penalty in some scenarios. Or seek an alternative specification of the fittingness-relationship that avoids these unpalatable consequences, hoping that the justification of the death penalty remains intact. We consider this possibility next.


2. The Qualitative Matching Version
Here’s the second attempt to specify the fittingness-relationship:

The Qualitative Matching Principle: If a person engages in a culpable wrong of type X, then the fitting punishment is for an act that qualitatively matches the wrong-making properties of X to be performed to them.


The tools of act theory can be used to flesh this principle out as well. Previously, we limited ourselves to one level of abstraction when seeking the fitting punishment. That is to say, we grouped particular act tokens — stabbing to death in one case, shooting in another — together into the general act type of killing. We then said that replicating this general act type would be the fitting response to those act tokens. This was to engage in one-level of abstraction in the search for fitting punishment (from the particular act tokens to the general act type).

But we could have gone further. We could have asked: what are the properties of the act type of killing that makes particular tokens of that act wrong? There are many different accounts of this. For instance, it could be that the general act type of killing is wrong because it exemplifies the even more general wrong of “permanently denying someone the capacity to consciously self-direct their life” or of “irreversibly terminating a person’s opportunity for future positive experiences”. If we looked for fitting punishments in these higher levels of abstraction, the goal of punishment would be to come up with some practice that qualitatively matches these kinds of wrongs.

We’ll return to these specific accounts of the wrongness of killing in a moment. But for now let’s consider whether this approach solves the problems with the punishment-in-kind principle. As we saw, the problem with that principle was that, if followed strictly, it seemed to warrant extremely harsh and inhumane forms of punishment. This was because the punishment had to replicate the general act type of the wrongdoer, as in the raping the rapist counterexample. Arguably, this problem was caused by the fact that it limited itself to the first level of abstraction. If we jumped to a higher level of abstraction, we wouldn’t have to resort to inhumane punishments of this sort. Thus, the wrongness of rape could be that it exemplifies the more general wrongs of “violating autonomy” or “domination and exploitation”. It is possible to replicate those wrongs in a punitive act without actually trying to rape the wrongdoer.

The point is that once we jump to the higher levels of abstraction, the wrongness we are trying to match will be capable of being exemplified in many different kinds of act tokens. That is the usual effect abstraction: it groups more and more discrete phenomena together under a general category or label. As a result, the justifiability of the death penalty becomes less immediate. The defender will need to show how alternative types of punishment, which seem to qualitatively match the wrongness of the crime, actually fail to do so and that only death lives up to the demands of the principle. That’s a difficult task since it requires the exhaustive consideration of all the possible alternatives.

One suggested diagnosis of the problem with the punishment-in-kind principle is that it limits itself to one level of abstraction in the search for the fitting punishment. If it were reformulated so as to allow a search through higher levels of abstraction, the absurd and unwelcome forms of punishment could be avoided. But once we do this, as we did with the qualitative matching principle, it becomes much less clear that death is uniquely warranted by retributivism. Thus, the earlier claim seems to hold: it is possible for a retributivist to (a) struggle to justify the death penalty; or (b) consistently reject it.
Posted by John Danaher at 11:50 AM