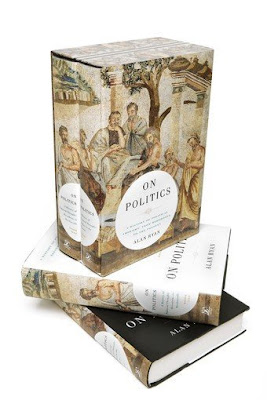 Political history fascinates me. And philosophy is clearly one of my passions. Consequently, it should come as no surprise to learn that the history of political philosophy is something I’m interested in. That’s why Alan Ryan’s recently published meisterwerk — On Politics: A History of Political Thought from Herodotus to the Present— is something I heartily recommend. (Aside: Would it really be that surprising if the history of political philosophy was not one of my interests? Maybe not, since the syllogism I offered exhibits the compositional fallacy)

The book is a bit of monster: it weighs in at just over a thousand pages, and in its hardback form (which is the only form it’s available in for now) it will put a serious dent in your bookshelf. Furthermore, in terms of content it covers an impressive sweep of history: as the subtitle says “from Herodotus to the Present”. Despite this, the immensely readable. Ryan is a long-time political philosopher and theorist (currently based in Princeton, I believe) and the book is very much the product of years of his years of personal reflection, research and teaching on the topic. As a result, there is an intimacy to the book that might so easily have been lost in its epic sweep.

In each chapter, Ryan looks at a particular figure or movement in the history of political thought. He sketches the socio-political backdrop to that figure or movement, and then exposits and critically engages with some of the key ideas and concepts. The format here is similar to that adopted Russell’s infamous A History of Western Philosophy — and Ryan acknowledges the influence in his introduction — but it is less showy and opinionated than Russell’s work. Don’t get me wrong, I love Bertrand Russell and enjoy his writing immensely, but whereas Russell tends to insert himself too much between the reader and the subject, Ryan tends to stand to one side, guiding you through the mire of political thought and conversation, providing some helpful commentary and observations along the way, but never forcing you towards one particular view.

The book is divided into two volumes. The first dealing with the period of history from the Ancient Greeks to the Renaissance (or as Ryan puts it “from Herodotus to Machiavelli”); and the second, which is nearly twice the length of the first, dealing with the period from Hobbes to the present day. Generally speaking, I’d be much more interested in the material covered by the second volume, but I found myself surprisingly captivated by the first volume. I suspect this is because I have recently been reading books (both fictional and non-fictional) dealing with the Holy Roman Empire and the role of the Catholic Church in the political life of Europe, and so it was interesting to read about the intellectual backdrop to some of that in more detail. Nevertheless, I imagine that others would find this pretty interesting stuff too since that era of history is often neglected in contemporary discussions of political force.

Now, I’ll be honest and say that I haven’t read the whole thing — it is over a thousand pages long — but I have dipped in and out repeatedly, and read substantial chunks. In so doing, I’ve been relieved to find that the book easily accommodates this a la carte method of reading. But despite this, the book does tell a coherent story about the development of political philosophy, and the changing conceptions and justifications of political structures that have come with it.

One criticism of the book, and an obvious one at that, is its neglect of non-Western sources. Only in the latter stages does it take a truly global perspective. This will no doubt irk some readers, but it hasn’t bothered me too much. Perhaps this is because I know so little about non-Western philosophy, an ignorance that is in no way helped by reading a book like this, but fortunately or unfortunately: ignorance is bliss.
Posted by John Danaher at 3:35 PM