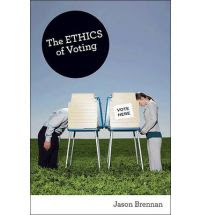 Things have been quiet on the blogging front over the past few weeks. But I have been doing a lot of reading over the Christmas period, and hope to start back with gusto at the weekend. In the interim, I thought I might fill the gap before more substantive blogging with a new book recommendation. I’m hoping to reinvigorate this series this year.

The book I want to recommend is Jason Brennan’s The Ethics of Voting, which I first heard about over on the New Books in Philosophy podcast. As we all know, there are certain propositions about voting that tend to be widely-believed in modern democratic societies. Indeed, they border on constituting the “sacred cows” of contemporary political discourse. These propositions include:

(1) You ought to vote, i.e. there is a moral (and in some countries legal) duty to vote.

(2) Every adult should be entitled vote, i.e. the principle of “one person, one vote” applies irrespective of intellectual, rational and moral virtue. (There are, perhaps, some accepted restrictions in some countries for prisoners, though the push is very much against this, particularly in Europe)

(3) People should not buy and sell their votes.


To be sure, there is a great deal of cynicism and apathy about these propositions. Many people fail to vote, and many argue that votes are “bought” and “sold” all the time. Nevertheless, I suspect most think that these propositions represent ideal or preferred states of affairs; that the failure to live up to them represents a corruption or degradation of the political process. Certainly, one encounters social groups that encourage people to vote all the time, without telling them exactly who to vote for. Thus, for example, non-partisan campaigns that encourage the youth vote are common in many countries. The suggestion from these campaigns seems to be that the act of voting is itself desirable, irrespective of its content. (The cynic may question this: since youth voters, in particular, tend to favour more certain candidates one could argue the motives behind such campaigns are not strictly impartial, but that’s by-the-by).

The nice thing about Brennan’s book is that it subjects each of three propositions given above (along with several more) to a sustained critique. In a patient yet concise manner, Brennan argues that there is no moral duty to vote; that it is not desirable for certain people with intellectual, rational and moral vices to vote; and that it is permissible for people to buy and sell votes. These are iconoclastic claims, and Brennan’s attempt to defend them is, I dare say it, in the best traditions of philosophy. It provides much food for thought, even if one isn't ultimately persuaded by what he has to say.

Another commendable feature of the book is its style. Every argument and proposition is presented with  clarity (formal arguments and propositions throughout), and the necessarily theoretical background is sketched out for the reader. One needn’t always agree with what Brennan says, but one can at least admire the way in which he says it.

On a final note, the book receives some pretty negative reviews over on Amazon, which should always be taken with a grain of salt, but I will conclude by saying that I agree with Chad Flanders's comment in his review of the book for NDPR: "Sometimes Brennan seems to revel too much in being contrarian, which nonetheless is what makes reading the book so much fun."