The Lucretian Symmetry Argument (Part One) 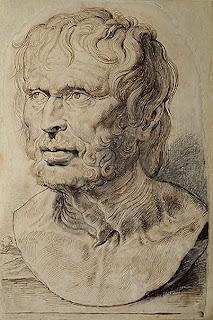 Death looms large for most of us, even if we try not to think about it. But should we be worried at the prospects of our eventual demise? Should we do everything we can to avoid it (e.g. by opting for cryopreservation)? Or should we approach it with indifference and equanimity?

The Epicurean school of thought supports the latter view — that of equanimity and indifference — with two classic arguments. The first, which we might call the experiential blank argument, holds that death is nothing to us because “we” won’t be around to experience it. This argument was the subject of a previous series of blog posts. The second, which is typically called the Lucretian symmetry argument, is the subject of this series of blog posts.

I’ll spread the discussion of the argument over a couple of blog posts. In the remainder of this post, I’ll outline the general form of the argument and consider possible strategies for responding to it. I’ll also consider Brueckner and Fischer’s (B&F’s), by now famous, objection to the argument. In subsequent posts, I will consider Feldman’s recent riposte to B&F and, in turn, their reply to Feldman.


1. What Lucretius Said
Once we get into the debate between Feldman and B&F, things will start to get pretty complex (and, if I’m honest, slightly arcane). But it’s reassuring to know that the debate between these parties is rooted in a fairly simple argument. The argument comes from a couple of passages from Lucretius’s On the Nature of Things. Here they are:

“In days of old, we felt no disquiet...So, when we shall be no more - when the union of body and spirit that engenders us has been disrupted - to us, who shall then be nothing, nothing by any hazard will happen any more at all.

Look back at the eternity that passed before we were born, and mark how utterly it counts to us as nothing. This is a mirror that Nature holds up to us, in which we may see the time that shall be after we are dead.”


The passages present a simple analogy (although you have to get past the archaic language in this translation to see it clearly). The analogy compares two states: (i) post-mortem non-being, or, more simply, “death”; and (ii) pre-natal non-being, which we’ll label PNNB. The suggestion is that these two states are similar in all crucial respects because they both entail our non-existence. The claim is then made that since PNNB “counts to us as nothing” so too should death count to us as nothing.

The phrase “counts to us as nothing” requires some unpacking. As with the other Epicurean arguments about death, there is a danger that we will conflate two distinct conclusions that the arguments might allow us to reach. The first conclusion has to do with the prudential axiology of death (i.e. whether death is good or bad for you). The second conclusion has to do with the psychological attitude one should have toward death (i.e. whether one should be afraid or not). The two conclusions may be connected, but if they are, this connection will have to be made explicit.

That’s exactly what this formal reconstruction of the argument attempts to do (inspired but modified from Feldman): 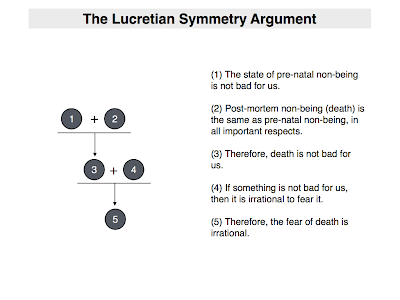 There are two-steps to the argument. The first taking us to the axiological conclusion; the second to the psychological conclusion. The steps are bridged by way of the principle posited in premise (4). One may doubt whether this principle is true. For instance, it could be that we rationally fear things that are not bad for us (e.g. things that are bad for others). I won’t be considering such concerns here (I will do some other time). Instead, I shall assume that prudential badness and the rationality of fear are intimately linked in the manner suggested by premise (4).

This shifts most of the focus back to the first step of the argument. As we can see, that step is strictly analogical in nature. As a result, that part of the argument is not logically sound: the conclusion does not actually follow from the premises as a matter of deductive certainty. This is because, following Douglas Walton, I view analogical arguments as presumptive arguments. These are arguments that lead to defeasible conclusions that can be set aside under certain conditions. Those conditions relate to: (a) the truth of the claim made about the first relevant case; and (b) the strength of the similarity between the two relevant cases: death and PNNB. If the claim made about PNNB is not true, or if the two cases are not similar “in all important respects”, then the conclusion does not follow.

The first possibility — i.e. that PNNB is, contra Lucretius, actually bad for us — will resurface later in the discussion. In the meantime, the second possibility — that death and PNNB differ in certain crucial respects — will monopolise our attention.


2. The Simple Disanalogy and the Parfittian Bias
An obvious difference between PNNB and death is this: our existence precedes our death, but not our PNNB. That much seems banal, even platitudinous in its obviousness, and by itself it does not seem like it could defeat the Lucretian argument. One imagines Lucretius replying with a confident “So what? That’s not a significant difference.”

Amnesia Operation: You are in hospital for a serious, and extremely painful operation. The operation cannot be performed with anaesthetic, and the pain is so severe that doctors have decided to administer powerful memory-erasing drugs to everyone who undergoes it, believing that this is the only way for people to overcome the trauma. The medication is administered before the operation and essentially blocks out your memory for several hours on either side of the operation. You awake in your hospital bed, unable to remember what has happened. You ask the nurse on duty, but she can only tell you that either (a) you just woke up from the operation or (b) you are due to undergo the operation in the next half hour.

Query: Which possibility do you prefer?


Parfit reckons that most people would prefer possibility (a). This suggests that we have a certain “Con Bias Toward the Future”. In other words, we prefer not to have negative experiences lying in our future.

Now, Parfit has his own reasons for discussing this case, and they will feature in part two, but for the time being what’s important is how two other philosophers — Brueckner and Fischer — have used this idea to respond to the Lucretian symmetry argument. Taking Parfit’s notion onboard, B&F argue that not only do we have a “Con” bias toward the future, we also have a “Pro” bias toward the future. In other words, given the option, we prefer to have positive experiences in the future. To see this, simply modify the Parfittian thought experiment:

Pleasure Drug: You are in the hospital to test some new drug. The drug gives you intense feelings of pleasure for approximately one hour. However, soon after you will forget everything. You wake up in your hospital bed and ask the nurse on-duty what your status is. She tells you that you either: (a) took the drug yesterday but have now forgotten; or (d) are due to take the drug later today.

Query: Which possibility do you prefer?


B&F suggest the answer is obvious: you would prefer (d). This, they argue, justifies their belief in the pro-bias toward the future. The gist of the idea is depicted below. 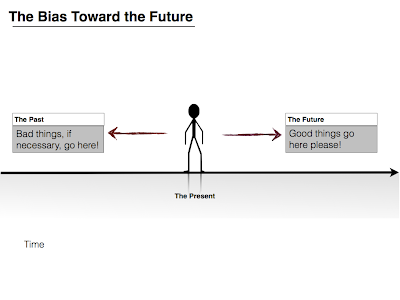 3. The Future Bias and the fear of Death
These biases are all well and good, and the thought experiments used to uncover them are interesting, but where does it get us? Surely, all they really show is that we are (or, at least, might be) biased toward the future. How can we use that fact to defeat the Lucretian argument?

It takes a bit of work, but we can eventually use it to undermine the analogy Lucretius tried to draw. That process starts with the following argument:


…we can reject premise (2). This is depicted in the diagram below. 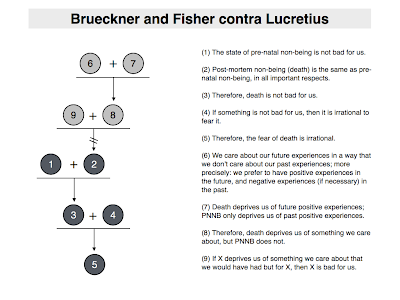 But is this really a persuasive rebuttal to the Lucretian argument? Is there not something slightly suspicious about appealing to the Deprivation thesis in order to defeat Lucretian symmetry, especially given that it was really this deprivation-based account of the badness of death that Lucretius was trying to undermine? We’ll look at these questions in part two.