Are we innate retributivists? Review of the Psychological Evidence 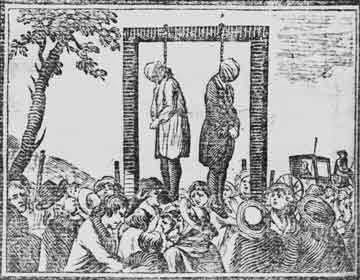 The ethical debate about the merits of consequentialism vis-a-vis retributivism is long-running. I have written about it many times in the past. In this post, I want to take a slightly different perspective on the matter. I want to look at the psychological basis of our punishment practices. Why do ordinary people impose punishment on others? Do they do so for consequentialist reasons? Or are they all “innate” retributivists? (I use the term “innate” loosely: I do not mean to imply that there is a natural instinct or hardwired drive for retributivism — though that is possible; I simply mean to imply that retributivism might be the default or cognitively more felicitous approach for most people).

There has been much research on this matter over the past 20 years. I want to review some of it here. In doing this, I rely heavily on a article by Carlsmith and Darley (both leading researchers on this topic). I’ll talk about methodology first, then look at some studies.


The innate retribution hypothesis is that most people make punishment decisions on a retributivist basis, rather than on a consequentialist basis. That is to say, they are sensitive to the gravity of the wrong and the degree of blameworthiness of the wrongdoer, not the amount of deterrence or rehabilitation (or whatever) that can be achieved through punishment. To give an example, for the retributivist the unknown person who committed ten, intentional and carefully planned murders would deserve more punishment than the famous celebrity who was found driving under the influence, even if the latter’s punishment would have a greater deterrent effect.

How can we study this hypothesis? Carlsmith and Darley identify two methods:

Verbal report method: Simply ask people why they chose to punish someone in the way that they did.


Behavioural measure method: Ask people to perform various punishment-related tasks (e.g. ascribe punishment to an individual based on a vignette) and then try to infer their underlying cognitive processes from their behaviour on that task.


The verbal report method is easy to implement, but flawed. People often don’t have a good understanding of why they made the decisions they made; they often say what they think other people want to hear; and they often rationalise decisions after the fact. That’s why most researchers prefer the behavioural measure method, even though it is more difficult to implement.

A typical behavioural study will present subjects with a series of vignettes. The vignettes will describe a crime or wrong, and the subject will be asked to choose an appropriate punishment. The vignettes will vary either in terms of the wrong being done, the degree of blameworthiness, or the amount of good that could be achieved through punishment. By varying the vignettes in this manner, researchers can tease apart the role of retributive and consequentialist criteria in punishment-related decision-making.


2. What does the research show?
That should be enough by way of background. What does the research actually show? Does it support the innate retribution hypothesis? Carlsmith and Darley argue that it does. In particular, they argue that research up to now shows that people are naturally drawn to retribution-related information, that their judgments are sensitive to that information (and not consequentialism-related information), that they find it easier to understand retributivism, that there few individual differences in this inclination, and that there is a disparity between what people believe about their punishment-related goals and their actual behaviour. Let’s look at the studies that back all this up:


Punishment decisions are highly sensitive to retribution-relevant criteria, not consequentialist criteria: This is supported by a couple of studies. Darley et al 2000 compared retribution-relevant criteria to incapacitation-related criteria (i.e. likelihood of an individual offender re-offending). Subjects were presented with 10 vignettes that varied in terms of the gravity of the crime (petty theft to assassination) and in terms of both the prior history of the offender and the future likelihood of reoffending. The study found that punishment decisions were highly sensitive to the retribution-related criteria and that subjects largely ignored the likelihood of reoffending. In a sister study, published two years later, Carlsmith et al (2002), found that the same was true when you compared retribution to general deterrence. This study also included more variations in the degree of wrongdoing and blameworthiness, and found that the sensitivity across these variations tracked the predictions of the innate retribution hypothesis.


People find it easier to understand the retributive theory of punishment: This finding comes from the Darley et al (2000) study. In that study, subjects were asked to review the same vignettes a second and third time from a particular theoretical perspective. Subjects were given an explanation of the different theories (retribution or incapacitation) and were then asked to assign punishment in each of the vignettes on the basis of those theories. Subjects found it much easier to adopt the retribution perspective. Indeed, even when explicitly instructed to ignore retribution, they were still were found to pay some attention to retribution-relevant criteria (e.g. the gravity of the offence).


There are few, if any, individual differences in punishment style: The Carlsmith et al 2002 study tried to see whether there were systematic differences in punishment style between individuals. In other words, could it be that even though the majority were retributivists, there were a few consistent consequentialists? They investigated this by explaining the theories to the subjects and asking them to pick statements that best articulated their own views. This led to the categorisation of experimental subjects as either retributivists, consequentialists or pluralists. The experimenters then tracked the decisions of these different groups in relation to the different vignettes. They found practically no difference. People who identified with the deterrence position were slightly more sensitive to deterrence-related criteria, but the effect was small and dwarfed by their sensitivity to retribution-related criteria.


Self-reported justifications for punishment bear little relation to actual punishment-related behaviour: This is unsurprising in light of the previous finding, but it’s worth knowing a bit more about it. In a 2008 study, Carlsmith tried to see whether people’s self-reported justifications for punishment were consistent with their actual punishment-related decisions. He found that they were not, thereby showing problems with self-report studies. He also found that although people expressed support for deterrence related policies (e.g. zero tolerance) they soon abandoned these policies once they realised that those policies failed to track proportionality.


People are unlikely to endorse a system of restorative justice that lacks retributive features: This a slightly narrower finding. Restorative justice is the name given to approaches to criminal justice that try to minimise harsh treatment. The goal instead being to repair the harm done to victims of crime and to restore the offender to their community. In a study done by Gromet and Darley in 2006, it was found that people were less likely to endorse such a system if it ignored retribution completely. The study looked at different offences and asked subjects to assign the offender to one of three courts. The first court was purely restorative (with no punitive elements), the second was mixed, and the third was traditional (i.e. punitive only). The experimenters found that people accepted the purely restorative system for low-level offending (e.g. “Halloween mischief”) but not for higher levels of offending (e.g. attempted rape or murder). 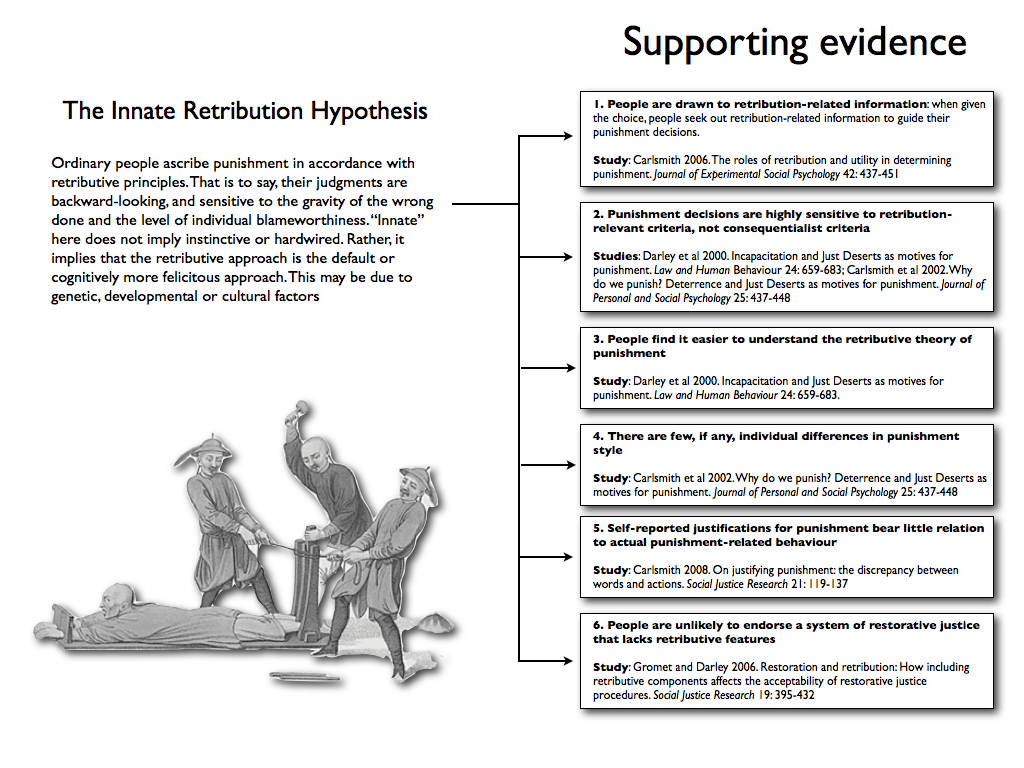 Taken together, these findings seem to make an impressive case for the innate retribution hypothesis. They suggest that people are cognitively inclined to the retributive point of view. There are, however, problems with this analysis.


3. Concluding thoughts
I need to preface this with a confession. I have not read all the details of these studies. I know that they try to control for various confounds and use multiple manipulations of the vignettes in order to rule out competing hypotheses. That said, in the review article, Carlsmith and Darley suggest that their studies proceed from a particular philosophical assumption: that retributivisim and consequentialism are, fundamentally, irreconcilable. They accept that deterrence-based judgments could be sensitive to the level of wrongdoing, but they argue that this sensitivity is contingent in nature only. The ultimate goal is deterrence and if you can deter more people by severely punishing a less-deserving offender, then so be it. Achievement of that goal trumps any sensitivity to wrongdoing. As they put it themselves:

We have argued, as have numerous philosophers, that retribution and utility cannot be effectively integrated and that logic dictates an “either/or” approach. This strikes many readers as overly simplistic because it is easy to think “I want both…”. There is certainly nothing wrong with this sentiment, and holding these desires simultaneously is not illogical. Indeed, it is frequently the case that a punishment can serve both functions effectively. Nonetheless, the two justifications are not isomorphic and frequently diverge on appropriate sentences. It is in these situations that one must make a choice, and that one motive will trump the other.


And it is these situations that their vignettes are designed to test.

This seems like a philosophically sophisticated position, but it may lead some to question the results being presented. There are those who think that consequentialism-based decision-making can incorporate a proportionality requirement. They will be inclined to think an appropriately designed study could account for this. This reminds me, somewhat, of the empirical study of free will and responsibility. Many of the early studies on people’s attitudes toward free will and responsibility assumed that deterministic explanations of human behaviour ruled out responsibility (i.e. that the two concepts were not reconcilable). But, of course, this ignored numerous sophisticated compatibilist views. More recent studies have tried to correct for this.

I wonder whether something similar could be true of the study of punishment? I am not sufficiently well-read on the psychological literature, but the analogy seems pretty direct. The logical, either/or incompatibility between free will and determinism is similar to the logical, either/or incompatibility between historical proportionality and consequentialism. Furthermore, the two domains of study seem to be importantly linked: beliefs about free will and responsibility often drive retributive judgments. That said, there are differences. I’m certainly more persuaded by the irreconcilability in the case of retributivism and consequentialism.

Another point to make is that the studies discussed above all seem to be performed on samples taken from the US population (primarily college students in the studies that I looked at). Although some of these are claimed to be representative samples of the US population, one may still wonder what the extent of cultural determination is in these cases. The US is, arguably, a more retributively inclined nation. Would the same results hold up in other countries? I found one study (on which Darley is a co-author) comparing US citizens to Canadians and Germans which suggested that differences across individuals are minimal, despite the general cultural disparities.

Anyway, those are just some quick thoughts on this topic. Carlsmith and Darley also use their empirical findings to make some normative claims about the law. I’m much more confident about my ability to assess those normative claims, so I’ll have a look at them in a future post.
Posted by John Danaher at 12:54 PM