Should we criminalise robotic rape and robotic child sexual abuse?

I recently published an unusual article. At least, I think it is unusual. It imagines a future in which sophisticated sex robots are used to replicate acts of rape and child sexual abuse, and then asks whether such acts should be criminalised. In the article, I try to provide a framework for evaluating the issue, but I do so in what I think is a provocative fashion. I present an argument for thinking that such acts should be criminalised, even if they have no extrinsically harmful effects on others. I know the argument is going to be unpalatable to some, and I myself balk at its seemingly anti-liberal/anti-libertarian dimensions, but I thought it was sufficiently interesting to be worth spelling out in some detail. Hence why I wrote the article.

For the detail, you’ll have to read the original paper (available here, here, and here). But in an effort to entice you to do that, I thought I would use this post to provide a brief overview.


1. What is robotic rape and robotic child sexual abuse?
First things first, it is worth clarifying the phenomena of interest. I’m sure people have a general sense of what a sex robot is, and maybe some vaguer sense of what an act of robotic rape or child sexual abuse might be, but it’s worth being as clear as possible at the outset in order to head-off potential sources of confusion. So let’s start with the notion of a sex robot. In the article, I define a sex robot as any artifact that is used for the purposes of sexual stimulation and/or release with the following three properties: (i) a human-like form; (ii) the ability to move; and (iii) some degree of artificial intelligence (i.e. an ability to interpret, process and act upon information from its environment).

As you can see from this definition, my focus is on human-like robots not on robots with more exotic properties, although I briefly allude to those possibilities in the article. This is because my argument appeals to the social meaning that might attach to the performance of sexual acts with human-like representations. For me, the degree of human-likeness is a function of the three properties included in my definition, i.e. the more human-like in appearance, movement and intelligence, the more human-like the robot is deemed to be. For my argument to work (if it works at all) the robots in question must cross some minimum threshold of human-likeness, but I don’t know where that threshold lies.

Throughout the article, I distinguish robotic acts from virtual acts. The former are performed by a human actor with a real, physical robot partner. The latter are performed in a virtual world via an avatar or virtual character. There are, however, borderline cases, e.g. virtual acts performed using immersive VR technology with haptic sensors (e.g. such as those created by the Dutch company Kiiroo). I am unsure about the criminalisation argument in such cases, for reasons that will become clearer in a moment.


I don’t really defend the first premise of the argument in the article. Instead, I appeal to the work of others who have. For example, Steven Wall has defended a version of legal moralism that argues that actions involving harm to the performer’s moral character can, sometimes, be criminalised; likewise, Antony Duff has argued that certain public wrongs are apt for criminalisation even when they do not involve harm to others. I use both accounts in my article and suggest that if I can show that purely robotic acts of rape and child sexual abuse involve harm to moral character or fall within Duff’s class of public wrongs, then I can make the prima facie case for criminalisation.

This first premise is likely to be difficult for many, particularly those with a classic liberal or Millian approach to criminalisation. They will argue that only harm to others renders something apt for criminalisation. I sympathise with this view (which is why I am cagey about the argument as a whole) but, again, appeal to others who have tried to argue against it by showing that a more expansive form of legal moralism need not constitute a severe limitation of individual liberty and how it may be very difficult to consistently hold to the liberal view. I also try to soften the blow by highlighting different possible forms of criminalisation at the end of article (e.g. incarceration need not be the penalty). Still, even then I accept that my argument may simply lead some to question the moralistic principles of criminalisation upon which I rely.

Premise two is where I focus most of my attention in the article. I defend it in two ways, each way corresponding to a different version of legal moralism. First, I argue that purely robotic acts of rape and child sexual abuse may involve harm to moral character. This is either on the grounds that the performance of such acts encourages/requires the expression of a desire for the real-world equivalents, or on the grounds that the performance requires a troubling insensitivity to the social meaning of those acts. This is consistent with Wall’s version of moralism. Second, I build upon this by arguing that the insensitivity to social meaning involved in such acts (particularly acts of robotic rape) would allow for them to fall within Duff’s class of public wrongs. The idea being that in a culture that has condoned or belittled the problem of sexual assault, an insensitivity to the meaning of those acts demands some degree of public accountability.

In defending premise (2) I rely heavily on work that has been done on the ethics of virtual acts and fictional representations, particular the work of Stephanie Patridge. This reliance raises an obvious objection. There are those — like Gert Gooskens — who argue that our moral characters are not directly implicated in the performance of virtual acts because there is some distance between our true self and our virtual self. I respond to Gooskens by pointing out that the distance is lessened in the case of robotic acts. I rely on some work in moral psychology to support this view.

That is my defence of the prima facie argument. 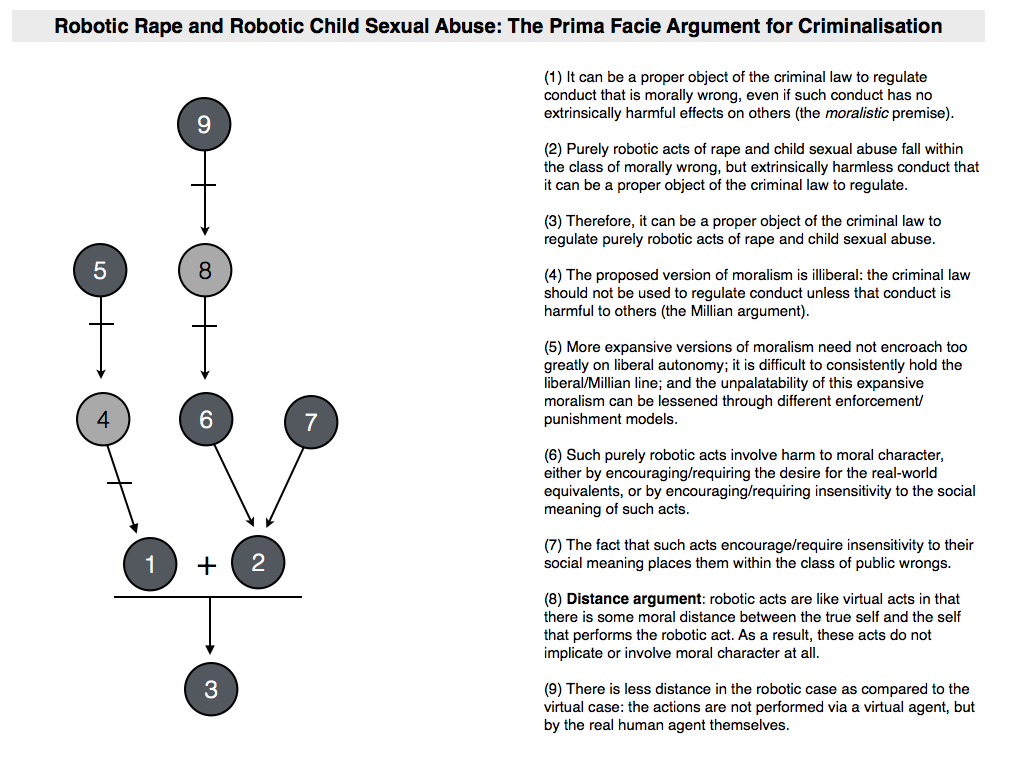 3. Can the prima facie argument be defeated?
But it is important to realise how modest that argument really is. It only claims that robotic rape and robotic child sexual abuse are apt for criminalisation all else being equal. It does not claim that they are apt for criminalisation all things considered. The argument is vulnerable to defeaters. I consider two general classes of defeaters in the final sections of the paper.

The first class of defeaters is concerned with the possible effects of robotic rape and robotic child sexual abuse on the real-world equivalents of those acts. What if having sex with a child-bot greatly reduced the real-world incidence of child sexual abuse? Surely then we would be better off permitting or facilitating such acts, even if they do satisfy the requirements of Duff or Wall’s versions of moralism? This sounds right to me, but of course it is an empirical question and we have no real evidence as of yet. All we can do for now is speculate. In the article, I speculate about three possibilities. Robotic rape and robotic child sexual abuse may: (a) significantly increase the incidence of real-world equivalents; (b) significantly reduce the incidence of real-world equivalents; or (c) have an ambiguous effect. I argue that if (a) is true, the prima facie argument is strengthened (not defeated); if (b) is true, the prima facie argument is defeated; and if (c) is true then it is either unaffected or possibly strengthened (if we accept a recent argument from Leslie Green about how we should use the criminal law to improve social morality).

The second class of defeaters is concerned with the costs of an actual criminalisation policy. How would it be policed and enforced? Would this not involve wasteful expenditure and serious encroachments on individual liberty and privacy? Would it not be overkill to throw the perpetrators of such acts in jail or subject them to other forms of criminal punishment? I consider all these possibilities in the article and suggest various ways in which the costs may not be as significant as we first think. 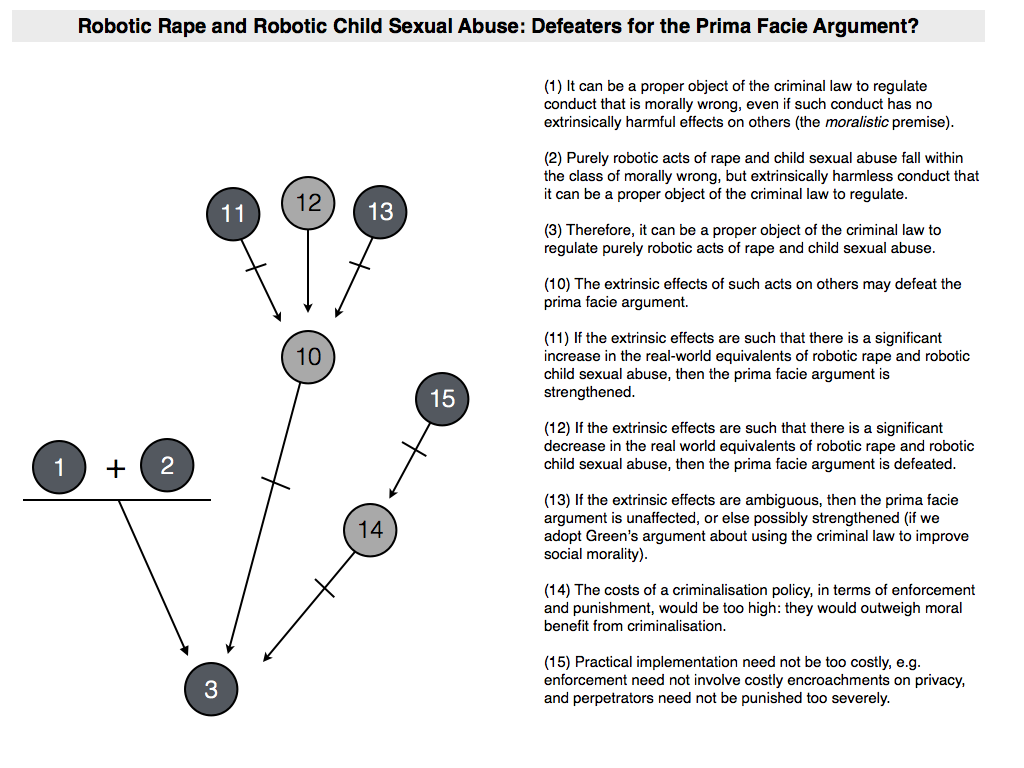 So that’s it. That is my argument. There is much more detail and qualification in the full version. Just to be clear, once again, I am not advocating criminalisation. I am genuinely unsure about how we should approach this phenomenon. But I think it is an issue worth debating and I wanted to provide a (provocative) starting point for that debate.
Posted by John Danaher at 1:22 PM