The Free Will Debate: Sourcehood or Alternative Possibilities?


What makes us free, if we are free? In other words, what conditions must be satisfied in order for us to say of any particular agent that he/she has free will or doesn’t? This is something that philosophers have long debated. Indeed, the free will debate is almost nauseating in its persistence and intricacy.

Nevertheless, there are essentially two basic views about what is needed in order to say that an agent has free will (note: throughout this post, assume that the term “free will” can be used interchangeably with the term “moral responsibility”; I know that some think there is an important distinction between the two terms, but for the purposes of this post these distinctions can be ignored):

Alternative Possibility View: In order for an agent to freely perform a particular action A (in the sense required for moral responsibility) the agent must have genuine alternative possibilities open to him or her at the moment he or she decided to A (or, in shorthand form, the agent must have been able to do otherwise). This condition is also referred to as the principle of alternative possibilities (PAP).


There are tensions between the two views. Some would argue that the alternative possibility view excludes the sourcehood view: if there are genuinely open alternative possibilities then this seems to require indeterminism, which also seems to exclude the possibility of the agent being the source of the actions. So it is important, before you decide what your position is going to be on the great free will debate, to figure out which view is more plausible.

That’s where this post comes in. In the remainder of it, I want to look at an argument from Derk Pereboom’s recent book Free Will, Agency and Meaning in Life, which claims that the sourcehood view is the more plausible one. Pereboom’s book presents probably the best available argument for hard incompatibilism (the view that free will is not compatible with causal determinism), and his defence of the sourcehood view is just part of this overall argument. I hope to cover other aspects of his argument in future posts, but I’m starting with this first piece of the puzzle.

Before I begin I want to say a big thank you to Gregg Caruso for writing an excellent little summary of Pereboom’s book. I’ll be following the structure of that summary in what follows.

So let’s start with PAP and Frankfurt style cases. As you’ll recall from above, PAPists think that an agent must have genuine alternative possibilities open to them at the moment they decide to act in order for them to exercise free will (in the sense required for moral responsibility). For a long time this seemed like a plausible account of what was necessary for free will. So much so that staunch compatibilists — i.e. those who think that free will is compatible with causal determinism — felt it incumbent upon them to explain how an agent “could have done otherwise” in a causally deterministic world.

This changed in 1969. That is when Harry Frankfurt published his famous paper detailing a type of thought experiment which seemed to undermine the need for PAP. Such thought experiments have since become known as “Frankfurt style cases”. Here is a classic one (modified from Wikipedia):

Frankfurt style case: Donald is a Democrat and is likely to vote for the Democrats; in fact, only in one particular circumstance will he not: that is, if he thinks about the prospects of immediate American defeat in Iraq just prior to voting. Ms White, a representative of the Democratic Party, wants to ensure that Donald votes Democratic, so she secretly plants a device in Donald's head that, if activated, will force him to vote Democratic. Not wishing to reveal her presence unnecessarily, Ms White’s device will only kick-in if Donald’s brain displays a certain neurological signal that is known to indicate that he is thinking about Iraq and so going to choose to vote Republican. As things happen, Donald does not think about Iraq prior to voting, and so he never displays the neurological signal needed for Ms White’s device to kick in. He is happy to vote Democrat. Did he do so in a way that makes him free and morally responsible for his decision? 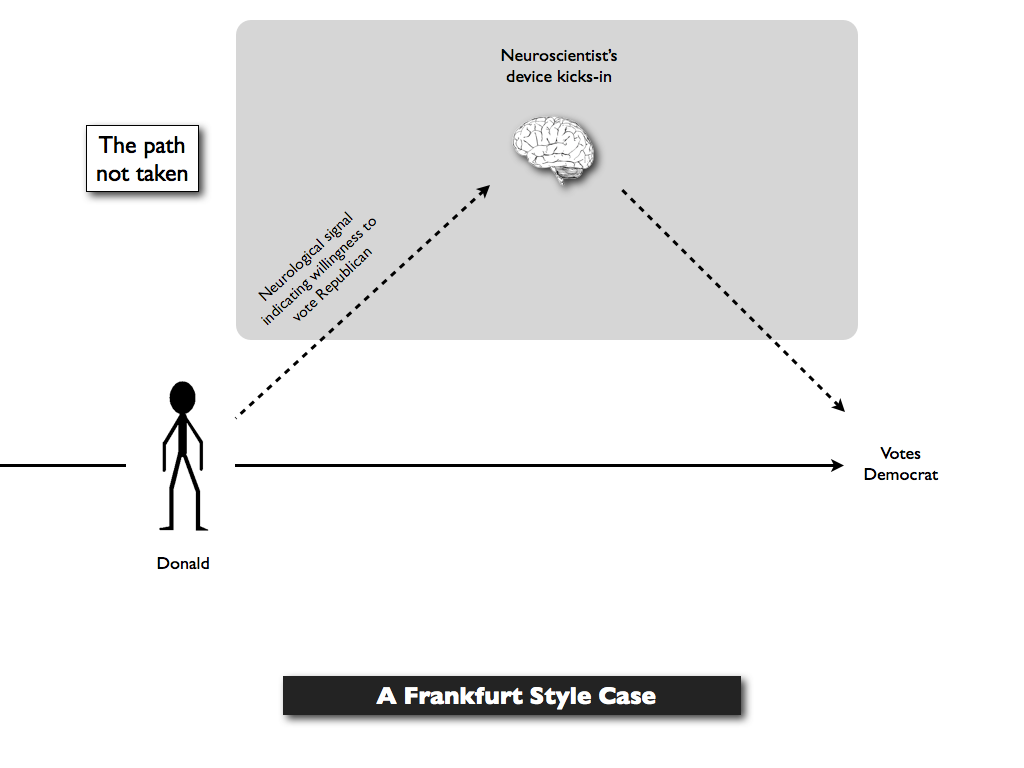 Frankfurt’s interpretation of this case is that Donald is indeed responsible for his vote. But look at the set-up of the case. He is responsible for his vote despite the fact that he could not have done otherwise. Ms White’s device closed off all the alternative possibilities. But this doesn’t seem to alter our intuitive reaction. This suggests that PAP is not necessary.

PAPists have some responses to Frankfurt style cases. Two are relevant here. The first — which I covered in more detail before — claims that in every proposed Frankfurt case there is a “flicker of freedom”, i.e. a flicker of a genuine alternative possibility which is open to the agent, and that the presence of this flicker can account for our intuitive reaction. Thus, in the case just outlined, Donald’s brain could have displayed the relevant neurological signal indicating his desire to vote Republican. The fact that he could have done so explains why we think he is responsible for nonetheless choosing Democrat. And all of this is consistent with PAP.

Robustness Criterion for PAP: For an agent to have a robust alternative to her immoral action A, that is, an alternative relevant per se to explaining why she is blameworthy for performing A, it must be that:


(a) She could have voluntarily acted or refrained from acting as a result of which she would be blameless, and


With this criterion in place, we have a clearer sense of what the PAPists are demanding. And with a clearer sense of what they are demanding, we can construct a new Frankfurt case that seems to show how PAP is not required for moral responsibility. Such a case will feature a counterfactual intervener (the neuroscientist’s device) that stops an agent from reaching the conditions needed to meet the robustness criterion, but in which the agent nevertheless seems intuitively responsible for what they did. The implication drawn from this intuition then is that PAP is not needed for free will and moral responsibility, which in turn suggests that the sourcehood view is the only game left in town.

So what is Pereboom’s new Frankfurt case? It is complicated, but here it is in its entirety (it is called Tax Evasion 2 because it is updated and improved from an earlier thought experiment proferred by Pereboom in his 1999 book Living Without Free Will):

The point is that in this case causal determinism is explicitly not assumed to be true: we are told that nothing necessitates certain actions by Joe. What is assumed, however, is that a certain level of attentiveness is a necessary, but not sufficient, condition for Joe to do otherwise. This level of attentiveness also happens to be essential if the robustness criterion is to be met, for only then will Joe have the requisite cognitive sensitivity to the exempting alternative possibility. The set-up is such that a counterfactual intervener will alter Joe’s decision if that level of attentiveness is reached, but that level of attentiveness never is reached. Despite this, according to Pereboom, it is intuitively attractive to say that Joe was responsible for his decision to evade taxes: he knew what he was doing was wrong, his personality prioritised self-interest over costs to others, but he went ahead and did it.

What are we to make of this intuitive reaction? Well, Pereboom thinks we are to infer that PAP is mistaken. Genuine alternative possibilities — ones that meet the robustness criterion — are not needed for free will and responsibility. This can be shown our reaction to a thought experiment which does not assume the truth of causal determinism and which pays attention to the robustness criterion. What’s more, the most plausible explanation for the intuitive belief that Joe is responsible for what he did in this case is the sourcehood view: Joe is responsible because of who he is and how his character/personality/occurrent beliefs and desires are linked to his decision.

Of course, Pereboom is walking a fine line in drawing this inference. I know when I first read Tax Evasion 2 I was inclined to be more agnostic about Joe’s responsibility. This was because I was inclined to question why Joe was so self-interested and inattentive to certain moral reasons. Were external forces responsible for that? Could he really be blamed? Ultimately, Pereboom also asks these questions and draws the further conclusion that, despite the intuitive appeal of Joe’s responsibility, neither he nor anybody else is truly free and responsible for what they do. The argument that leads him to this conclusion will have to wait for another day. In the interim, with his revised Frankfurt style case, he only hopes to show that the sourcehood view is to be preferred over the alternative possibility view. So, if we are to have free will, we must be the sources of our actions. We need not have access to genuine alternative possibilities.
Posted by John Danaher at 7:00 AM