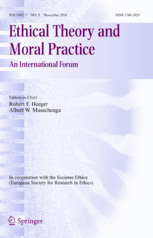 I have a new paper coming out in the journal Ethical Theory and Moral Practice. This one deals with two objections to human enhancement. In both cases I first try to strengthen and clarify the objections before arguing why I think they ultimately fail. Fuller details are below. The official version of the paper won't be published for a couple of months, but you can access the final pre-publication drafts at the links I provide (philpapers is open access; academia.edu may require free sign-up in order to access).

Title: Human Enhancement, Social Solidarity and the Distribution of Responsibility

Abstract: This paper tries to clarify, strengthen and respond to two prominent objections to the development and use of human enhancement technologies. Both objections express concerns about the link between enhancement and the drive for hyperagency (i.e. the ability to control and manipulate all aspects of one’s agency). The first derives from the work of Sandel and Hauskeller and is concerned with the negative impact of hyperagency on social solidarity. In responding to their objection, I argue that although social solidarity is valuable, there is a danger in overestimating its value and in neglecting some obvious ways in which the enhancement project can be planned so as to avoid its degradation. The second objection, though common to several writers, has been most directly asserted by Saskia Nagel, and is concerned with the impact of hyperagency on the burden and distribution of responsibility. Though this is an intriguing objection, I argue that not enough has been done to explain why such alterations are morally problematic. I try to correct for this flaw before offering a variety of strategies for dealing with the problems raised.