Why do symbols matter and how much do they matter? 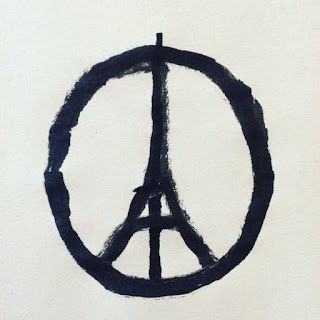 Symbols are valuable. People debate the ethical status of racial slurs, obscene paintings and blasphemous films. In these debates symbols (words, artworks and films) are deemed to have all sorts of (negative) value-laden connotations. In an earlier post, I looked at Andrew Sneddon’s work on the nature of these symbolic values. He argued that there were two main types of symbolic value. The first involved symbols being valued in virtue of what they represented (what he called ‘symbols as a mode of valuing’). The second involved symbols being valued, at least in part, for their own sake (what he called ‘symbols as a ground of value’).

In this post, I want to continue my analysis of Sneddon’s work by focusing on two further questions: (i) Why is it that symbols have value? and (ii) How much value do they have, or to put it another way, how much weight should they be accorded in our practical reasoning? Sneddon offers some programmatic assistance in answering both questions. Let’s see what he has to say.


1. Why do symbols have value?
To answer the first question we need to consider the general nature of value. In philosophical terms, this means we must conduct an axiological investigation into the grounds of value (‘axiology’ being the study of value). This is a controversial issue. Some people deny that there is any unifying ground of value. They argue that certain values are basic, incommensurable and sui generis. This, for example, is the view of natural law theorists like John Finnis who argue that one can identify approximately seven basic goods that determine what is valuable in human life.

Sneddon thinks it is possible to be a little bit more unificatory. He suggests that there are several basic value-laden concepts that we employ in our ethical discussions. These include things like harm/benefit, rights, and virtues. These concepts have distinct conditions of application, but they are unified insofar as they are all concerned with ensuring that human beings have a reasonable prospect of living a decent life. Thus, we worry about harms and celebrate benefits because they enhance individual well-being; we endorse rights because they protect individuals from unwarranted interference and entitle them to benefits; and we cherish virtues because we think they make possible a prosperous and fulfilling life. In all cases, the moral concepts seem reducible to concerns about the ‘contours of minimally acceptable human living’ (Sneddon 2015, s.4). Symbolic values fit within this general matrix as they too are concerned with conditions of acceptable human living but they are concerned with them in a distinctive way.

What is this distinctive way? To answer that, we need to consider the differences between the various value-laden concepts. In particular, we need to consider their differences along two dimensions: (i) the constitutive dimension, i.e. what is the concept constituted by? and (ii) the evaluative dimension, i.e. why do we care about it? Take harm/benefit as a first example. Sneddon argues that harms and benefits are constitutively individualistic. That is to say: harms/benefits are things that happen to or accrue to an individual human being. So, being physically assaulted is harmful because it negatively impacts on an individual’s life. Harms and benefits are also evaluatively individualistic. That is to say, we care about them because of what they do to individuals. This should be contrasted with rights. Rights are constitutively relational because they set conditions on how individuals can relate to one another, but they are evaluatively individualistic because these conditions are valued in virtue of how they improve individual lives.

Symbols are distinctive because they are both constitutively and evaluatively relational. Thus, Sneddon thinks they are important because of their centrality to the relational aspects of human life. Symbols are constitutively relational because they are objects, signs, practices (etc) that represent or stand for something else. Hence, they always stand in relations to both human interpreters and that which is being represented in symbolic form. This is clear from the Peircean account of symbols that I outlined in a previous post. Furthermore, they are evaluatively relational because they are important in virtue of how they mediate the relationship we have with others and the world around us. Thus, a racial slur is (negatively) value-laden because of what it says about the relationship between the user of the slur and the person or race in question.

I have tried to illustrate this categorisation of symbolic value in the diagram below. It shows how symbolic values differ from harms/benefits and rights. 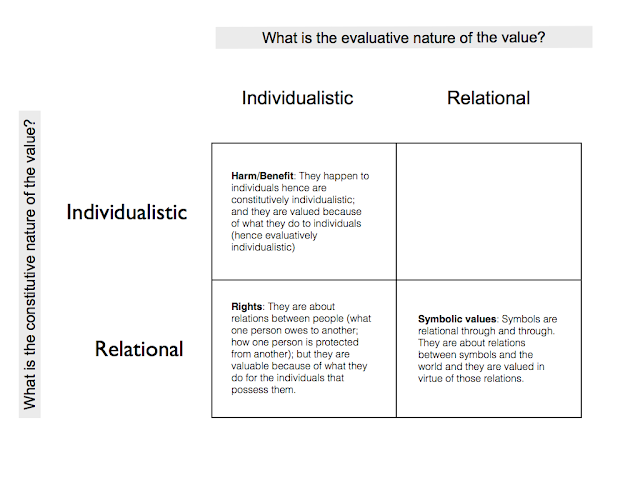 Before I move on, I should say that Sneddon’s views about axiology and the categorisation of different value-laden concepts are disputable. For instance, one could challenge the notion that value-laden concepts are ultimately reducible to concerns about human living. Some people argue that there are genuine impersonal goods, i.e. goods that do not depend or rely upon human beings for their existence. Certain arguments in environmental ethics try to make the case for such goods. Likewise, one could dispute the claim that rights are constitutively relational but evaluatively individualistic. It is possible that there are group rights that are valued in virtue of how they affect relations between groups. The same could be true for certain harms and benefits. That said, I’m not sure that any of these criticisms would undermine the fundamental point, which is that symbols are valuable in virtue of how they mediate the relational aspects of human life.


2. How much value do symbols have?
This brings us to the second question. We can grant that symbols have some sort of value in virtue of their relational properties. The question is how much value do they have? It is impossible to answer that question in the abstract. The value of symbols will vary across contexts and cases. The symbolic disvalue of the N-word is relatively high and relatively fixed. It should probably be afforded a significant amount of weight in our practical reasoning. Other symbols might be more flaky and less weighty. Nevertheless, despite the fact that there is no abstract answer to the question, there are certain general guidelines for thinking about the status of symbolic values in ethical reasoning.

One such guideline concerns the polysemous nature of symbols. ‘Polysemy’ is a fancy word meaning simply that symbols often have more than one legitimate interpretation. This is true even of something as contentious as the N-word. Although this word usually has significant disvalue and so should be avoided at all costs, in certain contexts (e.g. rap music) it could have more positive connotations and could be used for more positive ends. The polysemous nature of symbols means that claims about symbolic values should often be viewed as being essentially contestable. This is a point I made at greater length in a previous post about Brennan and Jaworski’s paper on symbolic objections to markets. The upshot of that post was that symbolic practices are themselves subject to ethical scrutiny and can be overridden by other ethical considerations. Sneddon makes pretty much the same point, adding that it is rarely going to be worthwhile to dispute particular interpretations of symbols. Instead, one is more likely to make progress by navigating through ‘webs of competing symbolic claims’.

The risk/opportunity model builds upon how we think about harms and benefits. Harms and benefits are positive and negative outcomes that accrue directly to individuals. Risks and opportunities are different. Risks are potential harms. They are events that presage or increase the likelihood of a harm accruing to an individual. Opportunities are the opposite: events that presage or increase the likelihood of a benefit accruing to an individual. Risks and opportunities thus have representational properties: they represent potential harms and benefits. This makes it relatively easy to fit them within the framework of symbolic values. We can understand symbols as things that represent potential harms and benefits — i.e. things that are risks and opportunities. Sneddon illustrates this with the examples of Serrano’s Piss Christ and the flag of the USA. The former could be deemed disvaluable because of the risk it presents (of harm to particular communities of belief etc.); the latter could be deemed valuable because of the opportunity it represents (USA as a land of hope and opportunity). The weight that is given to these risks and opportunities would then depend on their relative magnitude and the context in which we are making decisions. In some cases, minimal risks are worth taking seriously. In others, the risk would have to cross some threshold before it was taken seriously. In every case, it would need to be weighed against actual or potential benefits.

I’m not sure that the risk/opportunity model is the most natural way to think about symbolic value, though it may be useful in some instances. One problem is that it is primarily consequentialist in nature. The second model is more deontological and focuses on symbols as insults or compliments. We are familiar with insults and compliments in our everyday lives. If I insult someone, I fail to respect them in the appropriate manner. This may result in some emotional harm to that individual and this harm might explain why the insult is problematic. But sometimes insults do not result in any direct harm. They are deemed problematic because they violate some duty that we owe to a person or group of persons. The same goes for compliments, albeit in the positive direction. Compliments are above and beyond the call of duty. Both insults and compliments are relational in nature: they are valued in virtue of, and constituted by, relationships between persons. Sneddon argues that we can view symbols as types of insult and compliment. So, for instance, a racial slur can be deemed problematic because it insults a person or group of persons. It may not result in any direct harm to that person or group, but it nevertheless violates a duty that was owed. The significance of these duties in our practical reasoning depends on how one approaches moral duties more generally. Must one comply with all duties? Can one duty be overridden by another? Can duties be abandoned if following them results in significant consequential harm to another person? These questions are beyond the scope of this post. They have to do with the clash between consequentialist and deontological theories more generally.

Okay, that’s it. To briefly recap, Sneddon argues that symbols are valuable in virtue of their relational properties, specifically in virtue of how they mediate and guide our relationship with others and the world around us. The importance of symbolic values will vary depending on the context, but it should be remembered that the interpretation of many symbols is essentially contestable. We can also use the models of risk/opportunity and insult/compliment to think about the role of symbolic values in our practical reasoning.
Posted by John Danaher at 11:32 AM