The Goods of Work (other than Money) in a Postwork Future 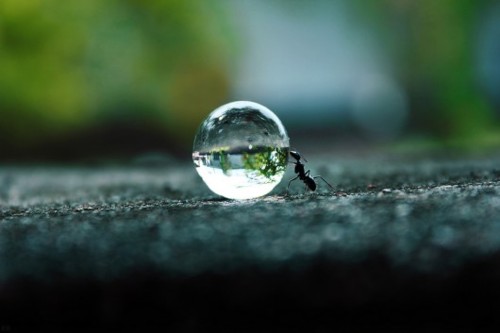 Let’s distinguish between two senses of the word ‘work’:

Work1: The performance of some skill in return for, or in the ultimate hope of receiving, an extrinsic economic reward.

Work2: Activities performed by human beings, individually and in groups, for both intrinsic and extrinsic reasons, not necessarily for economic reward.


The second sense is the more general one, encompassing all human activities. The first sense is the one I always rely upon in my writing about technological unemployment and antiwork political philosophy. I introduce them both here because I want to look at a recent paper by Anca Gheaus and Lisa Herzog entitled ‘The Goods of Work (other than money)’, which deals with the ways in which ‘work’ contributes to the good life.

The paper makes two interesting points. First, it argues that paid work (i.e. work1) can be a source of great value and meaning in our lives, apart from the economic rewards it provides. In fact, there are four specific non-monetary goods associated with work which should be recognised and distinguished from one another. Second, it argues that these goods should be factored into any theory of distributive justice. This has important repercussions for those who think that redistributions of income are an adequate compensation for the loss of work.

I want to examine these points in light of my ongoing interest in technological unemployment, the basic income guarantee, and the concept of a ‘postwork’ future. Although I appreciate Gheaus and Herzog’s identification of the goods of work, and their linking of these goods to debates about distributive justice, I want to suggest that concern for these goods is compatible with welcoming the shift to a postwork future. Part of the reason for this has to do with the distinction between the two senses of the word ‘work’ outlined above.


1. The Four Non-Monetary Goods of Work
In his much-lauded 2011 documentary Jiro Dreams of Sushi, the filmmaker David Gelb presents a fascinating insight into the working life of Jiro Ono, a legendary Tokyo-based sushi chef. Jiro runs a small, three Michelin-starred, restaurant in the basement of an inauspicious Tokyo office building. He has been making sushi, day in day out, for over 70 years. He embodies the philosophy of the shokunin (roughly, the Japanese for ‘craftsman’), constantly seeking to refine and improve his technique, and finding his work to be immense source of value and personal satisfaction.

The documentary lacks a critical edge but nevertheless makes an important point, namely: that there is something about dedicating one’s life to the cultivation of a skillset that can be incredibly rewarding. If this can, in turn, be a source of economic security for oneself and one’s family, then this is all the better. But the value of the work doesn’t lie solely in the receipt of the economic reward. One gets the sense from the documentary that Jiro is entirely unmotivated by money: he is solely concerned with his craft. That work can be source of such meaning is an important factor when considering the antiwork position that I have articulated on this blog a number of times.

It is also one of the central insights of Gheaus and Herzog’s paper. They argue that work is a privileged context for the realisation of four non-monetary ‘goods’. These goods are analytically distinct and should be factored into any scheme of distributive justice. They are:


Community: Work is a way in which people can achieve the good of community. It is commonly observed that people desire to do things together with other people, i.e. to interact with others and engage in joint enterprises. Work provides one of the chief fora for engaging in joint enterprises. As the labour law scholar Cynthia Estlund has observed “the workplace is the single most important site of cooperative interaction and sociability among adult citizens outside the family” (quote taken from Gheaus and Herzog 2015). Gheaus and Herzog note that different work environments can be more or less conducive to this good. The traditional hierarchical organisational structure of the company may not be the best way in which to achieve a sense of community; more cooperative and egalitarian organisational structures might be preferable. Again, this good is clearly separable from the previous two: community is possible with neither excellence nor social contribution.


Social Status: Recognition and validation is an important part of human social life. Our sense of self-worth is negatively and positively impacted by the esteem in which others hold us. Work is a way in which to achieve esteemed social status. As Gheaus and Herzog put it “[f]or the majority of people in this day and age paid employment provides by far the most opportunities for gaining social recognition.” Recognition is often achieved through the extrinsic rewards of work (pay, benefits in kind, power, organisational role and so forth), rather than directly through the work product itself, though obviously there is a connection between the two. The recognition associated with work is partly symbolic insofar as it is a function of a cultural system in which work and the work ethic is valorised. Recognition is, once again, clearly separable from the previous goods: one can achieve higher status through work without necessarily being excellent, without working in community with others, and without making important social contributions.


The four non-monetary goods of work are illustrated below. 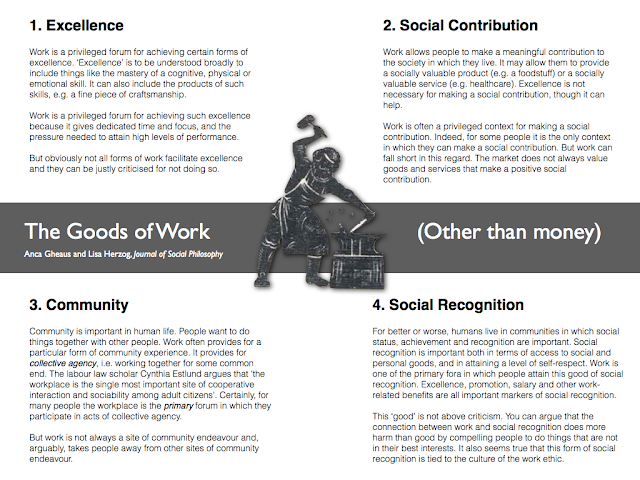 2. The Goods of Work in a Postwork World
I find much to admire in Gheaus and Herzog’s analysis of the goods of work. I think it is undeniable that work is, as they rightly suggest, a forum in which these four goods can be achieved. I also think they are right to emphasise that these goods should be factored into any scheme of distributive justice. We shouldn’t assume that the goods of work can be compensated for by redistributions in income. Arguments for the basic income guarantee are thus only a partial solution to the problem of unemployment.

That said, I’m more interested here in the question of what this means for a postwork future, i.e. a future in which machines can replace humans in most economically productive forms of labour. Should we worry about such a future because it would cut us off from the goods of work? I appreciate this is not something that directly concerns Gheaus and Herzog in their paper, but I nevertheless think that their analysis suggests that it should not. There are two main reasons for this.

The first has to do with Gheaus and Herzog’s claim that work is a ‘privileged context’ for the realisation of the four non-monetary goods. As they themselves concede, this claim is highly contingent. Paid work is clearly associated with both bad things and good things. I have dedicated several blog posts to articulating the negative features of paid work, including its monopolisation of time, its erosion of freedom and autonomy, its limitation of opportunities, and its increasing precariousness (to name but a few). Gheaus and Herzog recognise this point and, indeed, discuss the ‘bads’ of work in a short section of their paper. It is also pretty clear from their analysis that paid work only imperfectly realises the four goods they mention. This is why they think it is important to factor the goods into a scheme of distributive justice: if everyone was getting these four things from their work there would be no need to worry about their distribution. Finally, the fact that (paid) work is a ‘privileged context’ for the realisation of the four goods is only true because we live in an economic system in which work is effectively compulsory (i.e. you must do it, or prove that you are unable to do it, in order to survive). It’s because we have to dedicate so much time to paid work that it becomes a forum for achieving excellence, social contribution, community and social status. If machines could takeover most forms of productive labour, and if the link between labour and income was severed through the introduction of a basic income guarantee, then paid work might lose this ‘privileged’ status. Again this is something the authors recognise, suggesting that their analysis only holds given the current reality.

This brings me to the second reason for thinking we could embrace a postwork future, which is that the four goods identified by Gheaus and Herzog are also clearly realisable in the absence of paid work. The problem with their analysis is that it does not clearly distinguish between the two senses of the word ‘work’ that I introduced at the outset of this article. The four goods are made possible by work2, not by work1. We will never stop working2, no matter how good machines get at displacing human labour, but that doesn’t mean we shouldn’t welcome the end of working1.

I’m not sure that this claim needs an elaborate defence. It seems obviously true that people can achieve excellence, social contribution, community and social status without paid work. Indeed, people already do this. For example, most of the work2 that I perform on this blog is unpaid (it is connected to my professional work, but indirectly so). Nevertheless, I’m motivated to do it because I think it helps me to develop various types of excellence (in terms of intellectual insight, writing, communication skills and so forth). It may also help me to make a social contribution and attain social status (though I’m less sure about those two things). I have many friends who use sports and other hobbies as fora for achieving the four goods identified by Gheaus and Herzog. They don’t get paid for any of these activities. It also seems obviously true that the compulsory nature of work can hinder many people from attaining these goods as they are forced to engage in forms of work that are not conducive to excellence, social contribution, community and are associated with a lowly social status. People need to engage in the right types of work2 to achieve the four goods. They do not necessarily require work1.

This doesn’t mean that the end of work1 is an unequivocal good. There are legitimate concerns one can have about the tendency for technological unemployment to exacerbate social inequality, and it is possible that the technological trends that facilitate widespread technological will cut us off from important sources of objective meaning. These are the concerns that interest me and that I have discussed at length elsewhere on this blog.
Posted by John Danaher at 11:02 AM