Pornography and the Philosophy of Fiction 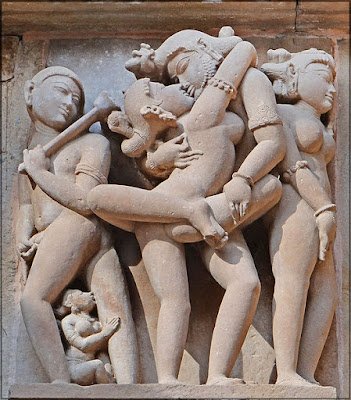 [If you like this blog, consider signing up for the newsletter...]

Pornography is now ubiquitous. If you have an internet connection, you have access to a virtually inexhaustible supply of the stuff. Debates rage over whether this is a good or bad thing. There are long-standing research programmes in psychology and philosophy that focus on the ethical and social consequences of exposure to pornography. These debates often raise important questions about human sexuality, gender equality, sexual aggression and violence. They also often touch upon (esoteric) aspects of the philosophy of speech acts and freedom of expression. Noticeably neglected in the debate is any discussion of the fictional nature of pornography and how it affects its social reception.

That, at any rate, is the claim made by Shen-yi Liao and Sara Protasi in their article ‘The Fictional Character of Pornography’. In it, they draw upon a number of ideas in the philosophy of aesthetics in an effort to refine the arguments made by participants in the pornography debate. Their thesis is simple but has several parts. I’ll call it the “genre is important” thesis:


Over the remainder of this post, I want to look at the argument they develop in support of this thesis. As I hope becomes clear, I think Liao and Protasi make some valid and persuasive points, but I do wonder about the practical significance of what they have to say.


1. Pornography as Fiction
First I need to clarify some of the terminology Liao and Protasi use in their argument. The most important is how they understand the term ‘fiction’:

Fiction = Any representation that prompts imaginings.


This definition comes from the work of Kendall Walton. It has some subtleties. Under this definition, a ‘fiction’ need not be fictional. A fictional representation may be based on real-world events or depict real actions (as in the case of a documentary film). It may also, of course, be based on fake or invented events and actions (as in a drama or satire). This is important because pornography usually does represent real-world events and actions (to state the obvious: the people represented often really are having sex). This does not prevent them from being fictions in the defined sense.

The more important part of the definition concerns the prompting of imagination. Liao and Protasi have a longish argument in their paper as to why sexual desire (as an appetite) involves imagination and hence why pornographic representations often prompt imaginings. That argument is interesting, but I’m going to skip over the details here. The important point is that in satisfying our sexual appetites we often engage the imagination (imagining certain roles or actions). Indeed, the sexual appetite might be unique among appetites as being the one that can be satisfied purely through the imagination. Furthermore, the typical user of pornography will often engage their imaginations when using it. They will imagine themselves being involved (directly or indirectly) in the represented sexual acts.

Why is it important to understand pornography as fiction? It is important because some people who argue against pornography appeal to its fictional character. The most noteworthy example of this is Anne Eaton. Back in 2007 she published an article called ‘A Sensible Antiporn Feminism’, which is required reading for anyone with an interest in this issue (followed by a ‘response to critics’ in 2008). In that article she presents a very careful analysis of the claim that pornography causes harm to women.* She distinguishes various forms that this claim could take and ends up endorsing one version of it.


The idea is that when you view inegalitarian pornography you are sexually aroused by its representations — that is the intention behind its creation. You are then encouraged to export that arousal out into the real world. The backbone of Eaton’s argument is, then, a transference principle:


Liao and Protasi’s argument takes aim at this transference principle. They argue that not all inegalitarian pornography encourages such transference. It depends on its genre.

Response Realistic Fiction: Makes some normative claims on real-world attitudes and responses. In other words, it encourages reactions to fictional representations that are similar to reactions to analogous real-world events.

Response Unrealistic Fiction: Does not make normative claims on real world attitudes and responses. In other words, it does not encourage reactions to fictional representations that are similar to reactions to analogous real-world events.


Whether fiction is response-realistic or not depends on its genre. It is easiest to explain this with an example. Liao and Protasi contrast dramas and satires in their paper. Take the TV show The Wire. This is a highly realistic, oftentimes gritty, look at the drug war. Its fictional representations (the characters and events in the show) try to be as faithful to real-world analogues as possible. This is very clear when you watch the show. It is, thus, a response realistic fiction. It encourages reactions to the fiction that transfer out to the real world.

Contrast that with the film Dr Strangelove. This is a highly satirical, occasionally ridiculous, look at nuclear deterrence. Its fictional representations are amped-up and hyperbolic. They are not intended to be faithful to their real-world equivalents. But that doesn’t mean that it is not meant to be taken seriously. Stanley Kubrick obviously wanted us to laugh at the movie, but he also wanted us to realise how catastrophic the logic of mutually assured destruction can be. He wanted us to take the threat of real-world nuclear war seriously. The film was, consequently, a response unrealistic fiction. It did not encourage reactions to the fiction that transferred out to the real world. Where we laughed in response to the film we should probably cry (or get angry) in the real world.

Hopefully this explains the distinction between the two kinds of fiction. Before I proceed to Liao and Protasi’s critique of Eaton, I need to clarify one further detail. In the definition of the two types of fiction, I referred to the ‘normative claims’ they make on real world responses. What does this mean? Liao and Protasi cash this out in terms of a ‘responsibility for’ relationship. The idea is that fiction — depending its nature and genre — takes responsibility for certain real world reactions. Consequently, it can be normatively criticised or blamed for certain real world responses and not for others. This is quite distinct from saying that the fictional representation causes a real world response. Somebody who watches Dr. Strangelove might end up laughing at real world events associated with nuclear deterrence and consequently not take them seriously. But the fiction does not normatively endorse that response. It doesn’t take responsibility for it.

This focus on what the fiction is responsible for ends up being quite important.

This gives us the following argument against Eaton’s transference principle:


What should we make of this argument? I find much to admire in it. I think Liao and Protasi have presented a fascinating and in many instances plausible account of how different fictional representations function in our imaginations. That said, I have two major concerns about the argument and its practical significance.

Those are just some quick disagreements. I’ll close on a point of agreement. Liao and Protasi end their paper by suggesting that those who are interested in the effects of pornography could learn a lot by looking at the psychology of fiction and the research that has been done on our reactions to fictional representations. They also think that future research into the effects of pornography could benefit from paying closer attention to its multiplicity of genres. I think this is sensible advice.


* This is distinct from the claim that pornography results from harm or constitutes harm.
Posted by John Danaher at 8:26 AM