Abortion and the Violinist Thought Experiment 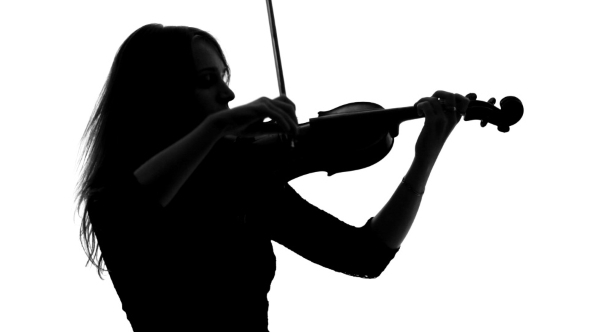 Here is a simple argument against abortion:


Defenders of abortion will criticise at least one of the premises of this argument. Many will challenge premise (2). They will argue that the foetus is not a person and hence does not have a right to life. Anti-abortion advocates will respond by saying that it is person or that it has some other status that gives it a right to life. This gets us into some abstruse questions on the metaphysics of personhood and moral status.

The trickier scenario is where the mother’s life is unthreatened. In those cases, if the foetus has a right to life, anti-abortionists will argue that the following duty holds:

Gestational duty: If a woman’s life is unthreatened by her being pregnant, she has a duty to carry the foetus to term.


The rationale for this is that the woman’s right to control her body cannot trump the foetus’ right to life. In the moral pecking order, the right to life ranks higher than the right to do with one’s body as one pleases.

It is precisely this understanding of the gestational duty that Judith Jarvis Thomson challenged in her famous 1971 article ‘A Defense of Abortion’. She did so by way of some ingenious thought experiments featuring sick violinists, expanding babies and floating ‘people-seeds’. Much has been written about those thought experiments in the intervening years. I want to take a look at some recent criticism and commentary from John Martin Fischer. He tries to show that Thomson’s thought experiments don’t provide as much guidance for the typical case of pregnancy as we initially assume, but this, in turn, does not provide succour for the opponents of abortion.


1. The Violinist Thought Experiment
The most famous thought experiment from Thomson’s article is the one about the violinist. Even if you know nothing about the broader abortion debate, you have probably come across this thought experiment. Here it is in all its original glory:

The Violinist: ‘You wake up in the morning and find yourself back to back in bed with an unconscious violinist. A famous unconscious violinist. He has been found to have a fatal kidney ailment, and the Society of Music Lovers has canvassed all the available medical records and found that you alone have the right blood type to help. They have therefore kidnapped you, and last night the violinist’s circulatory system was plugged into yours, so that your kidneys can be used to extract poisons from his blood as well as your own. The director of the hospital now tells you, “Look, we’re sorry the Society of Music Lovers did this to you — we would never have permitted it if we had known. But still, they did it, and the violinist is now plugged into you. To unplug you would be to kill him. But never mind, it’s only for nine months. By then he will have recovered from his ailment, and can safely be unplugged from you.”’ (1971: 132)


Do you have a duty to remain plugged into the violinist? Thomson argues that you don’t; that intuitively, in this case, it is permissible to unplug yourself from the violinist. That doesn’t mean we would praise you for doing it — we might think it is morally better for you to stay plugged in — but it does mean that we don’t think you are blameworthy for unplugging. In this case, your right to control your own body trumps the violinist’s right to life.

Where does that get us? The argument is that the case of the violinist is very similar to the case of pregnancy resulting from rape. In both cases you are involuntarily placed in position whereby somebody else’s life is dependent on being attached to your body for nine months. By analogy, if your right to control your own body trumps the violinist’s right to life, it will also trump the foetus’ right to life:


Since it will be useful for later purposes, I’ve tried to map the basic logic of this argument from analogy in the diagram below. The diagram is saying that the two cases are sufficiently similar so that it is reasonable to suppose that the moral principle that applies to the first case carries over to the second. 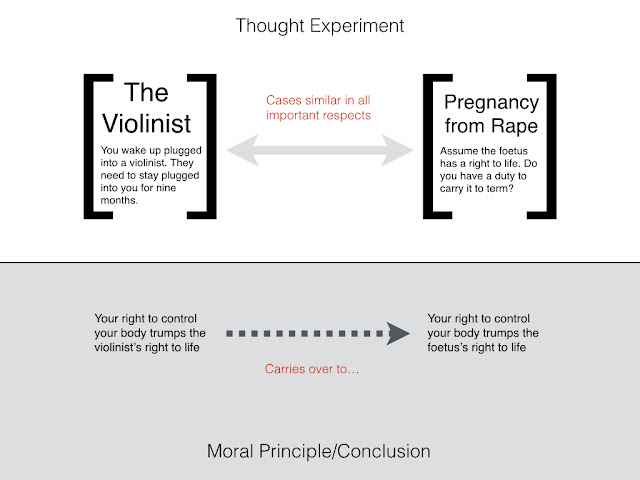 2. Fischer’s Criticism of the Violinist Thought Experiment
In his article, ‘Abortion and Ownership’, Fischer challenges Thomson’s intuitive reaction to The Violinist. His argumentative strategy is subtle and interesting. He builds up a chain of counter-analogies (i.e. analogies in which the opposite principle applies) and argues that they are sufficient to cast doubt on the conclusion that your right to control your own body trumps the violinist’s right to life.

He starts with a thought experiment from Joel Feinberg:

Cabin Case 1: “Suppose that you are on a backpacking trip in the high mountain country when an unanticipated blizzard strikes the area with such ferocity that your life is imperiled. Fortunately, you stumble onto an unoccupied cabin, locked and boarded up for the winter, clearly somebody else’s private property. You smash in a window, enter, and huddle in a corner for three days until the storm abates. During this period you help yourself to your unknown benefactor’s food supply and burn his wooden furniture in the fireplace to keep warm.” (Feinberg 1978, 102)


Feinberg thinks that in this case you have a right to break into the house and use the available resources. The problem is that this clearly violates the cabin-owner’s right to control their property. Still, the fact that you are justified in violating that right tells us something interesting. It tells us that, in this scenario, the right to life trumps the right to control one’s own property.

So what? The right of the cabin-owner to control his/her property is very different from your right to control your body (in the case of the violinist and pregnancy-from-rape). For one thing, the violation in the case of cabin owner is short-lived, only lasting three days, until the storm abates. Furthermore, it requires no immediate interference with their enjoyment of the property or with their bodies. We are explicitly told that the cabin is unoccupied at the time. So, on an initial glance, it doesn’t seem like the Cabin Case 1 tells us anything interesting about abortion.

Fischer begs to differ. He tries to construct a series of thought experiments that bridge the gap between the Cabin Case 1 and The Violinist. He does so by first imagining a case in which the property-owner is present at the time of the interference and in which the interference will continue for at least nine months:

Cabin Case 2: "You have secured a cabin in an extremely remote and inaccessible place in the mountains. You wish to be alone; you have enough supplies for yourself, and also some extras in case of an emergency. Unfortunately, a very evil man has kidnapped an innocent person and [left] him to die in the desolate mountain country near your cabin. The innocent person wanders for hours and finally happens upon your cabin…You can radio for help, but because of the remoteness and inaccessibility of your cabin and the relatively primitive technology of the country in which it is located, the rescue party will require nine months to reach your cabin…You can let the innocent stranger into your cabin and provide food and shelter until the rescue party arrives in nine months, or you can forcibly prevent him from entering your cabin and thus cause his death (or perhaps allow him to die)." (Fischer 1991, 6)


Fischers argues that, intuitively, in this case the innocent person still has the right to use your property and emergency resources and you have a duty of beneficence to them. In other words, their right to life trumps your right to control and use your property. Of course, a fan of Thomson’s original thought experiment might still resist this by arguing that the rights violation in this second Cabin Case is different because it does not involve any direct bodily interference. So Fischer comes up with a third variation that involves precisely that:

Cabin Case 3: The same scenario as Cabin Case 2, except that the innocent person is tiny and injured and would need to be carried around on your back for the nine-months. You are physically capable of doing this.


Fischer argues that the intuition doesn’t change in this case. He thinks we still have a duty of beneficence to the innocent stranger, despite the fact that it involves a nine-month interference with our right to control our properties and our bodies. The right to life still trumps both. This is important because Cabin Case 3 is, according to Fischer, very similar to the Violinist. 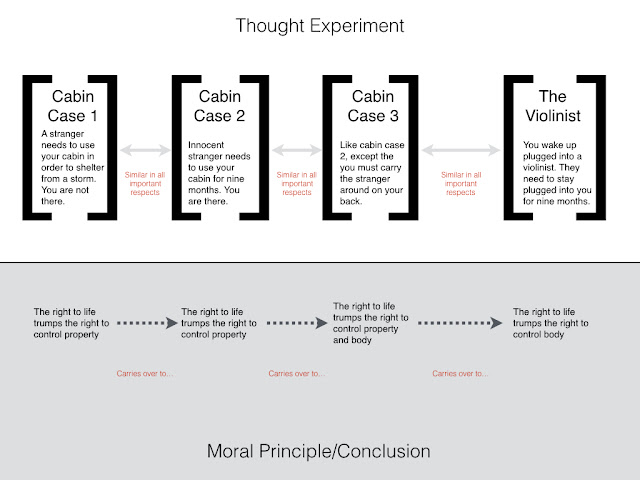 For what it’s worth, I’m not entirely convinced by this line of reasoning. I don’t quite share Fischer’s intuition about Cabin Case 3. I think that if you really imagined the inconvenience and risk that would be involved in carrying another person around on your back for nine months you might not be so quick to imply a duty of beneficence. That reveals one of the big problems with this debate: esoteric thought experiments can generate different intuitive reactions.

In the case of pregnancy resulting from rape, both the woman and the rapist will have a genetic link with the resulting child and will be its natural parents. The woman is likely to have some natural affection and feelings of obligation toward the child, but this may be tempered by the fact that the child (innocent and all as it is) is a potential reminder (trigger) of the trauma of the rape that led to its existence. The woman may give the child up for adoption — and thereby absolve herself of legal duties toward it — but this may not dissolve any natural feelings of affection and obligation.  Furthermore, the child may be curious about its biological parentage in later years and may seek a relationship with its natural mother or father (it may need to do so because it requires information about its genetic lineage). All of which is to say, that the relationship between the mother and child is very different from the relationship between you and the violinist or you and the tiny innocent person you have to carry on your back. Those relationships normatively and naturally dissolve after the nine-month period of dependency. This is not true in the case of the mother and her offspring. The interference with her rights lingers.

These differences may be sufficient to warrant a different conclusion in the case of pregnancy resulting from rape. But this is little advantage for the pro-choice advocate for it says nothing about other pregnancies. There are critics of abortion who are willing to concede that it should be an option in cases of rape. They argue that this doesn’t affect the gestational duty in the larger range of cases where pregnancy results from consensual sexual intercourse. That’s where Thomson’s other thought experiment (People Seeds) comes into play. I’ll look at that thought experiment, along with Fischer’s analysis of it, in the next post.