In 1993, Julian Dibbell wrote an article in The Village Voice describing the world’s first virtual rape. It took place in a virtual world called LambdaMOO, which still exists to this day. It is a text-based virtual environment. People in LambdaMOO create virtual avatars (onscreen ‘nicknames’) and interact with one another through textual descriptions. Dibbell’s article described an incident in which one character (Mr. Bungle) used a “voodoo doll” program to take control of two other users’ avatars and force them to engage in sexual acts.

In 2003, a similar incident took place in Second Life. Second Life is a well-known virtual world. It is visual rather than textual. People create virtual avatars that can interact with other user’s avatars in a reasonably detailed virtual environment. In 2007, the Belgian Federal Police announced that they would be investigating a ‘virtual rape’ incident that took place in Second Life back in 2003. Little is known about what actually happened, but taking control of another character’s avatar and forcing it to engage in sexual acts was not unheard of in Second Life.

More recently, in October 2016 to be precise, the journalist Jordan Belamire reported how she had been sexually assaulted while playing the VR game QuiVR, using the HTC Vive. The HTC Vive (for those that don’t know) is an immersive VR system. Users don a headset that puts a virtual environment into their visual field. The user interacts with that environment from a first person perspective. QuiVR is an archery game where players fight off marauding zombies. It can be played online with multiple users. Players appear in a disembodied form as a floating helmet pair of hands. The only indication of gender comes through choice of name and voice used to communicate with other players. Jordan Belamire was playing the game in her home. While playing, another user — with the onscreen name of ‘BigBro442 — started to rub the area near where her breasts would be (if they were depicted in the environment). She screamed at him to ‘stop!’ but he proceeded to chase her around the virtual environment and then to rub her virtual crotch. Other female users of VR have reported similar experiences.

These three incidents raise important ethical questions. Clearly, there is something undesirable about this conduct. But how serious is it and what should we do about it? As a first step to answering this question, it seems like we need to have a classificatory scheme for categorising the different incidents of virtual rape and sexual assault. Maybe then we can say something useful about their ethical importance? Prima facie, there is something different about the virtual sexual assaults that took place in LambdaMOO and QuiVR and these differences might be significant. In this post, I’m going to try to pin down these differences by developing a classificatory scheme.

In developing this scheme, I am heavily indebted to Litska Strikwerda’s article “Present and Future Instances of Virtual Rape…”. What I present here is a riff off the classificatory scheme she develops in her article.


This is a pretty vague definition. This is deliberate: I want it to cover a range of possible scenarios. There are many different kinds of virtual representations and virtual environments and hence many forms that virtual sexual assault can take. Nevertheless, since the focus is on sexual behaviour, we have to assume that these virtual representations and environments include beings who are capable of symbolically representing sexual acts. The paradigmatic incident of virtual sexual assault would thus be a scenario like the one in Second Life where two humanoid avatars engage in sexual behaviour. You may wonder what it means for sexual behaviour to be ‘unwanted, forced or nonconsensual’ in a virtual environment. I’ll assume that this can happen in one of two ways. First, if one of the virtual representations is depicted as not wanting or not consenting to the activity (and/or one is depicted as exerting force on the other). Second, and probably more importantly, if the human who controls one of the virtual representations does not want or consent to the activity being represented.

That’s virtual sexual assault. What about virtual rape? This is much trickier to define. Rape is a sub-category of sexual assault. It is the most serious and violative kind of sexual assault. But its definition is contested. Most legal definitions of rape focus on penetrative sex and get into fine details about specific organs or objects penetrating specific bodily orifices. The classic definition is ‘penile penetration of the vagina’, but this has been broadened in most jurisdictions to include oral and anal penetration. As Strikwerda points out, these biologically focused definitions might seem to rule out the concept of ‘virtual rape’. They suggest that rape can only take place when the right biological organ violates the right biological orifice. This is not possible if actions take place through non-biological virtual representations.

So I’m going to be a bit looser and less biologically-oriented in my definition. I’m going to define a virtual rape as any virtual sexual assault in which the represented sexual behaviour depicts what would, in the real world, count as rape. Thus, for instance, a virtual sexual assault in which one character is depicted as sexually penetrating another, without that other’s consent (etc) would count as a ‘virtual rape’.

Due to its less contentious nature, I’ll focus mainly on virtual sexual assault in this post.


2. Who is the perpetrator and who is the victim?
These definitions bring us to the first important classificatory issue. When thinking about virtual sexual assault we need to think about who is the victim and who is the perpetrator. The three incidents described in the introduction involved humans interacting with other humans through the medium of a virtual avatar. Thus, the perpetrators and victims were, ultimately, human-controlled. But one of the interesting things about actions in virtual worlds is that they need not always involve human controlled agents. They could also involve purely virtual agents.* A couple of years back, I wrote a blogpost about the ethics of virtual rape. The blogpost focused on games in which human controlled players were encouraged to ‘rape’ onscreen characters. These raped characters were not being controlled by other human players. They existed solely within the game environment. It was a case of a human perpetrator and a virtual victim. We could also imagine the reverse happening — i.e. a situation where purely virtual characters sexually assault human controlled characters — as well as a case involving two purely virtual characters.

This suggests that we can categorise the possible forms of virtual rape and virtual assault, using a two-by-two matrix, with the categories varying depending on whether they involve a virtual perpetrator/victim or a human perpetrator/victim. As follows: 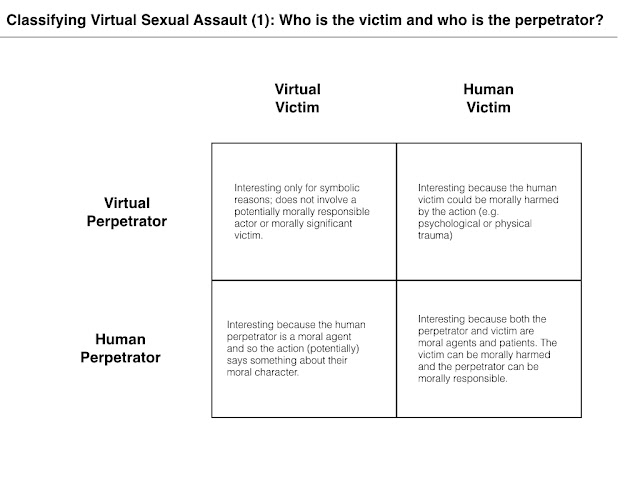 Is it worth taking all four of these cases seriously? My sense is that it is not. At least, not right now. The virtual-virtual case is relatively uninteresting. Unless we assume that virtual agents have a moral status and are capable of being moral agents/patients, the interactions they have with one another seem to be of symbolic significance only. That’s not to say that symbols are unimportant. They are important and I have discussed their importance on previous occasions. It is just that cases of virtual sexual assault involving at least one moral agent/patient seem like they are of more pressing concern. That’s why I suggest we limit our focus to cases involving at least one human participant.

Avatar interaction: This is where the human creates a virtual avatar (character, on-screen representation) and uses this avatar to perform actions in the virtual world.


Avatar interaction is the historical norm but immersive interaction is becoming more common with the advent of Occulus Rift and rival technologies. As these technologies develop we can expect the degree of immersion to increase. This is important because it reduces the psychological and physical distance between us and what happens in the virtual world. This ‘distance’ could have a bearing on how morally harmful or morally blameworthy the conduct is deemed to be.

Anyway, we can use the distinction between avatar and immersive interaction to construct another two-by-two matrix for classifying cases of virtual sexual assault. This one focuses on whether we have a human victim or perpetrator and the mode of interaction. This one is a little bit more complicated than the previous one. To interpret it, suppose that you are the human victim/perpetrator and that you either interact with the virtual world using an avatar or using immersive technology. If you are the human victim and interact using an avatar, for instance, there are two further scenarios that could arise: either you are assaulted by another human or by a virtual agent. This means that for each of the four boxes in the matrix there are two distinct scenarios to imagine. 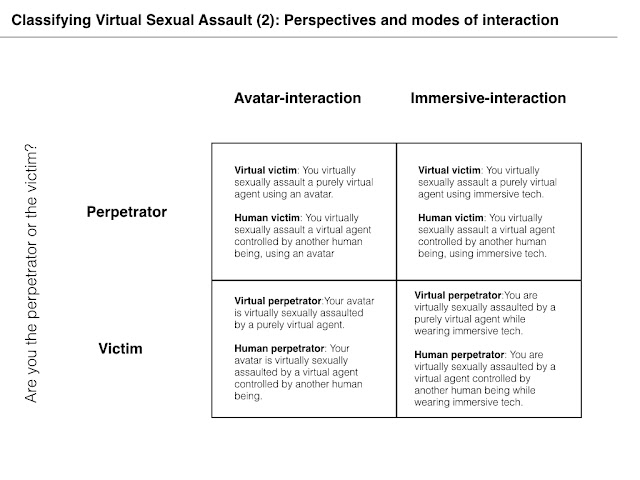 This, then, is the classificatory scheme I propose for dealing with virtual sexual assault (and rape). I think it is useful because it focuses on cases involving at least one human agent and encourages us to think about the mode of interaction, the role of the human in that interaction (victim or perpetrator), and to consider the ethics of the interaction from the perspective of the victim or perpetrator. All of the scenarios covered by this classificatory scheme strike me as being of ethical and, potentially, legal interest. We should be interested in cases involving human perpetrators because what they do in virtual worlds probably says something about their moral character, even if the victim is purely virtual. And we should be interested in cases involving human victims because what happens to them (the trauma/violation they experience) is of ethical import, irrespective of whether the perpetrator was ultimately human or not. Finally, we should care about the mode of interaction because it can be expected to correlate with the degree of psychological/physical distance experienced by the perpetrator/victim and possibly with the degree of moral harm implicated by the experience.

There is one complication that I have not discussed in developing this scheme. That is the distinction that some people might like to draw between robotic interactions and virtual ones. Robotic interactions would involve embodied, artificial agents acting with humans or other robots in the real world. There are cases in which robot-human interactions can be distinguished from virtual interactions of the sort discussed here (I wrote an article about some of the issues before). But there is one scenario that I think should fall under this classificatory scheme. That is the case where humans interact via robotic avatars (i.e. remote controlled robots). I think these can be classed as avatar-interactions or (if they involve haptic/immersive technologies) as immersive interactions. The big difference, of course, is that the effects of robotic interactions are directly felt in the real world.


That’s enough for now. In the future, I will try to analyse the different scenarios from an ethical and legal perspective. In the meantime, I’d be interested in receiving feedback on this classificatory scheme. Is it too simple? Does it miss something important? Or is it overly complicated?


* Of course, there is no such thing as a purely virtual agent. All virtual agents (for now) have ultimately been created or programmed into being by humans. What I mean by ‘purely’ virtual is that they are not under the immediate control of a human being, i.e. their actions in the game are somewhat autonomous.
Posted by John Danaher at 12:12 PM