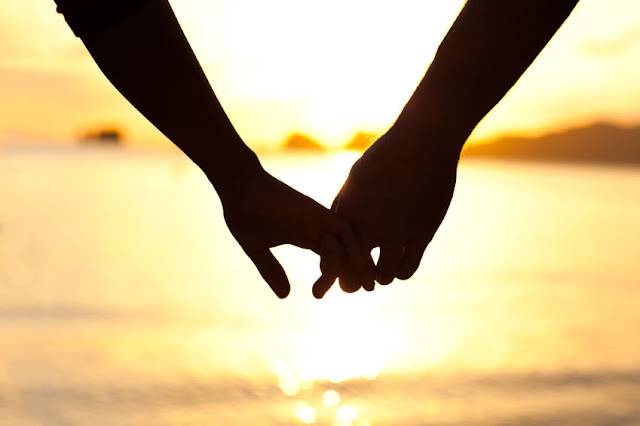 Free will skepticism (FWS) is the view that free will does not exist, at least not in the sense required for basic moral desert. In other words, it is the view that no one is responsible for what they do in the sense that they deserve punishment and blame for what they do. That, at any rate, is how FWS is characterised by Derk Pereboom in his book Free Will, Agency and Meaning in Life. Most of that book is dedicated to defending FWS and addressing its implications for our systems of responsibility and punishment. This is understandable given that those are the practical applications most widely-discussed in the literature on free will and moral responsibility.

But in the final chapter of the book, Pereboom turns his attention to an oftentimes neglected topic: the implications of FWS for personal relationships and meaning. Most of us want to live good lives. We want to have meaningful personal relationships and we want to participate in and contribute to projects of great worth. Many people have the nagging suspicion that free will is essential to those things. If we lack free will, then we do not control our fates. And if we do not control our fates, then surely we must resign ourselves to whatever happens and not take credit for our participation in those things. This leads some people to favour pragmatic or instrumental justifications for the belief in free will. They argue that even if the epistemic grounds for believing in free will are unpersuasive we should still believe in it because the pragmatic stakes are so high: if we cease to believe, much of what we value about our current lives will ebb away.

Pereboom tries to resist this resignation. He argues that FWS need not threaten personal relationships and meaning. In this post, I want to examine how he defends this point of view. I do so by focusing on his arguments pertaining to the role of free will in meaningful personal relationships.


1. The Role of Free Will in Meaningful Personal Relationships
The alleged connection between free will and meaningful achievement is easy to understand; the connection between free will and meaningful personal relationships is a little bit more opaque. The classic defence of the connection comes from the work of Peter Strawson. Strawson was famous for his ‘reactive attitudes’ account of moral responsibility. According to this view, the essence of moral responsibility lies in the expression of reactive attitudes (e.g. resentment, indignation, anger, disappointment etc.). Ascriptions of responsibility justify the expression of these attitudes. What’s more, these reactive attitudes are important precisely because they are bound-up with our interpersonal relationships. We need to express them because we care so much about what other people have done to us.

Some of these reactive attitudes seem to require moral desert in order for them to be justifiably directed at another person. Resentment and indignation, in particular, seem to require this. If you wrong me by betraying my trust, I may resent you for it, but my resentment would be inapt if you do not deserve moral blame for what you did. This creates a problem for the proponent of FWS. They don’t believe in moral desert and so it seems like they can never justifiably feel resentment or indignation towards another for what they have done. Is that a big deal? Some argue that it is because resentment and indignation are integral to meaningful relationships. Here’s the argument:

Let’s look at how one might defend premise (1). It does seem odd to claim that resentment and indignation are integral to meaningful personal relationships. After all, these are emotions that only need to be expressed when things are going badly, i.e. when your relationship partner has wronged you in some way. Furthermore, emotions of this sort often have long-term destructive potential. Resentment often builds up over time and reveals itself in highly toxic interactions. These interactions can be sufficient to bring a relationship to a crashing end. Surely a flourishing personal relationship would be devoid of these emotions?

This is an intriguing idea. Vulnerability is often thought to increase the value of a practice. For example, suppose you like to go running every day. Over time you build up a ‘running streak’ (i.e. a number of continuous days of running). That running streak gets both more valuable and more vulnerable over time. If you continue to run every day, its value is maintained, but if you fail to go running just one day, you will break the streak and its value will dissipate. The streak is highly precarious and highly valuable. Shabo is suggesting that personal relationships are somewhat similar. We invest a lot of emotional energy and trust in them. This makes them highly valuable and highly vulnerable. If our relationship partner betrays our trust, our emotional investment is (at least partly) bankrupted; but if we didn’t invest all that emotional energy, the relationship would not be so valuable. In short, we have to make a risky investment, to gain the real value; and so we have to open ourselves up to the potential of resentment and indignation to have a meaningful relationship. Shabo puts it like this:

It is plausible to think that an ordinary susceptibility to hurt feelings is at least characteristic of the sort of emotional investment required for mature love. One important reason for this is that mature love involves a significant degree of emotional vulnerability to the other…And, the thought continues, hurt feelings often beget resentment; for, like resentment, they are a reaction to the sense that one has been treated rudely, inconsiderately, disrespectfully, callously and so on.


To put this in argumentative form: 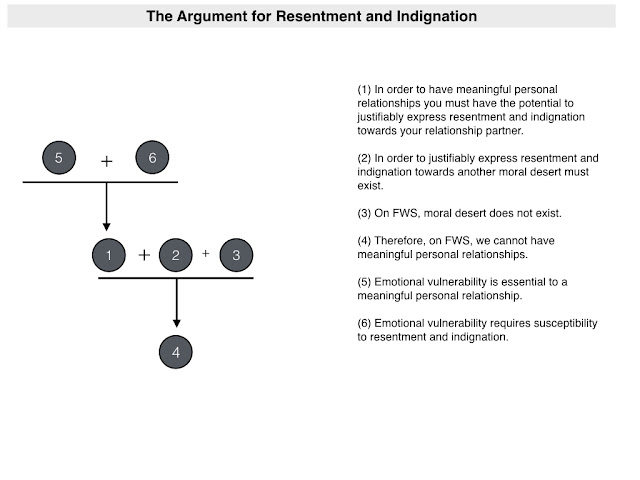 2. Resisting Resentment and Indignation
Is this line of argument any good? Should the FWS resign themselves to less meaningful and fulfilling personal relationships as a result of their dismissal of free will? As mentioned above, Pereboom thinks not. He accepts that justifiably directing resentment and indignation towards another requires moral blame, but he resists the claim that rejecting this prevents us from having meaningful personal relationships. He has two main arguments. I’ll give them names for ease of references. The first is the 'hidden costs' argument:

(7) Hidden Costs: While the expression of resentment and indignation might have some positive value it also has significant disvalue and this is often ignored by its proponents.


I sketched this argument earlier on. The idea underlying it is that resentment and indignation can actually be destructive of personal and relational well-being. Pereboom puts it like this:

But expression of resentment and indignation is apt to have harmful effects. It often fails to contribute to the well being of those to whom it is directed. Frequently it is intended to cause physical or emotional pain, and can give rise to destructive resistance instead of reconciliation. As a result, it has the potential to damage or destroy relationships.


While it is probably impossible to conduct a comprehensive cost-benefit analysis of the consequences of resentment and indignation, this argument does smack of plausibility and does force us to reconsider the pro-resentment/indignation reasoning. Pereboom then adds to that another argument:

(8) Substitute emotions: Even if resentment and indignation are not justified under FWS, there are other possible emotions that perform similar or equally valuable functions, e.g. sorrow, sadness, disappointment etc.


The idea here is that resentment and indignation are supposed to perform certain functions within a relationship: communicate one’s upset or shock at what another has done; send them a signal that their behaviour needs to change; release tension; and so on. Pereboom is simply claiming that similar functions can be performed by other emotions. It certainly seems plausible to claim this (though the dividing line between different emotions can be difficult to draw).

The combination of these two arguments provides a robust defence of the FWS position, but it does not respond to Shabo’s more sophisticated argument in favour of resentment and indignation. That argument made a special appeal to the role of emotional vulnerability in loving relationships and claimed that susceptibility to resentment and indignation was important if one was to enter into that state of vulnerability. Pereboom’s responds to this by introducting a counterexample:

(9) Parent-child counterexample: “Very commonly, teenagers go through a period when they have attitudes of disregard and disrespect for parents, expression of which can result in deeply hurt feelings. But often such expressions of disregard and disrespect do not occasion the parents’ resentment but rather their disappointment and sadness… [these emotions] are…manifestations of vulnerability on the part of the parent. Crucially, they are also personal, since the teenager’s attitudes toward his parent matter to them in their own right…

This, however, points to another way in which to understand the objections to the FWS position. Perhaps the critics are not really concerned with the justifiability of particular reactive attitudes and their importance in interpersonal relationships; perhaps they are really concerned with their practical necessity. Maybe it's the case that our innate (or cultural) drives to resentment and indignation are too powerful too resist? Maybe it’s not possible for people to have relationships without them? This casts the FWS appeal to substitute emotions into doubt.

(10) Impracticality: People have powerful drives toward resentment and indignation; it is not possible for them to rely on substitute emotions alone.


This is obviously a very different style of critique to the ones considered above (though, note, this is probably closer to what Shabo was arguing in his article about love and resentment). It moves us away from the normative debate about what is needed for meaningful interpersonal relationships into a debate about what is practically possible. Given that FWS is grounded in a sensitivity to what is and is not possible for creatures like us, it should come as no surprise to find that this objection is not particularly troublesome for the proponent of that view. Pereboom is a fan of what Shabo calls the ‘containment policy’. This policy accepts that we may feel resentful or indignant on occasion; it accepts that we are not morally perfect creatures; it simply argues that we should take steps to minimise those feelings (and substitute in alternative emotions) and not afford them any social or moral legitimacy when we do experience them. The goal of the FWS proponent is thus not to demand the impossible, but to encourage us to take steps toward a more positive grounding for our interpersonal relationships.

(11) Containment policy: FWS does not demand the impossible: we may continue to feel resentment and indignation. We should simply take steps to minimise those feelings and not afford them any social or moral legitimacy. 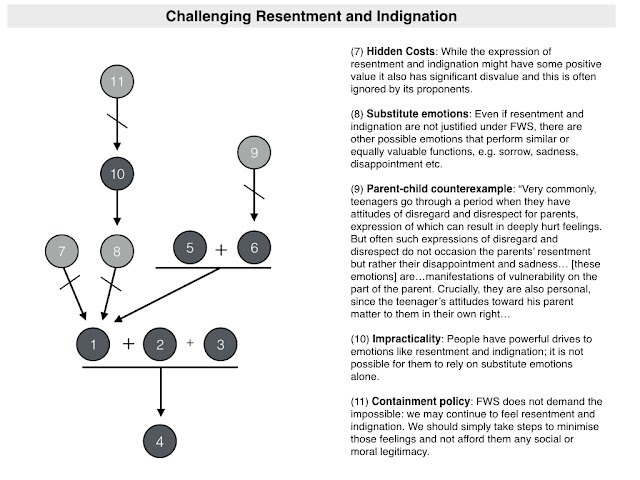 That brings us to the end of this post. There is more to be said, of course. Pereboom’s discussion of these issues is more nuanced than I am able to convey in this summary. Hopefully, what I have written gives a general sense of his position and how it is defended. Suffice to say, I find it generally persuasive. Although I may not fully embrace FWS (I’m somewhat on the fence), I do think that the case made for reactive attitudes like resentment and indignation is quite weak. Indeed, I'm always surprised by people who think that emotions such as indignation or resentment are positive and humane. Would they say the same about jealousy and rage? If not, why not? My sense, as someone who experiences these emotions from time to time, is that they destroy far more than they nourish and sustain. To suggest that they play an essential part in the well-lived life is deeply counterintuitive to me.