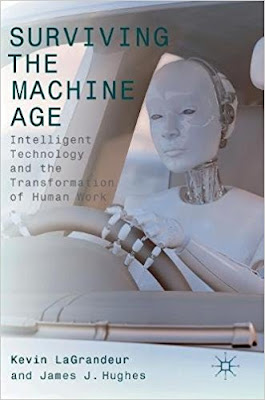 I have a new paper. It appears as a chapter in the book Surviving the Machine Age, which is edited by Kevin LaGrandeur and James Hughes. The book is, I believe, unique in how it brings together several different perspectives on what should and will happen to society in an era of rampant technological unemployment. It's a little bit pricy, but I would recommend it for purchase by university libraries and the like.

Details about my chapter are below, along with links to a pre-publication draft.

Abstract: Populations in developed societies are rapidly aging: fertility rates are at all-time lows while life expectancy creeps ever higher. This is triggering a social crisis in which shrinking youth populations are required to pay for the care and retirements of an aging majority. Some people argue that by investing in the right kinds of lifespan extension technology – the kind that extends the healthy and productive phases of life – we can avoid this crisis (thereby securing a ‘longevity dividend’). This chapter argues that this longevity dividend is unlikely to be paid if lifespan extension coincides with rampant technological unemployment. This does not mean that we should not pursue lifespan extension, but it does mean that the argument in its favor needs to rest on other grounds. After articulating these grounds, the chapter proceeds to consider the implications this has for our vision of the extended life, postwork utopia. It argues that this vision may need to be reconceived and suggests that one plausible reconception involves prioritizing the role of games in the well-lived life.