Tweet
It's been awhile, but today I will finally complete my discussion of the article on abortion by Mary Ann Warren.

Part One covered two arguments in favour of a right to access abortion. They were the disastrous consequences argument and the right to autonomous choice argument. In this part, the moral status of the foetus is addressed.


Moral Status
Warren begins this discussion by looking at the general question of moral status. All ethical theorists, be they utilitarians, Kantians or virtue ethicists, need to have some criterion for distinguishing morally relevant beings from morally irrelevant beings. What is this going to be?

Let's see what these are and how they might apply to the abortion question.

1. Life
Albert Schweitzer argued that the chief moral criterion was whatever property it is that distinguishes life from non-life. Living things are functionally organised in such a way as to ensure their own survival and reproduction. As living beings we share in this functional organisation, so we should have a moral concern for all beings with this property.

Warren suggests that a concern for life really flows from ecological and aesthetic concerns. In other words, from a desire to preserve a well-balanced ecosphere for practical (food, medicine, clothing) and aesthetic (beauty, wonder, awe) reasons.

The problem with using life as a criterion is its over-inclusiveness. While life is valuable, it is not unqualifiedly valuable. There are occasions in which it is necessary to kill another living being. The most obvious of which comes from our need to kill in order to eat (that holds for vegetarians as well since plants are most definitely "alive").


2. Genetic Humanity
The second proposed criterion is shared genetic humanity. In other words, any beings who share a sufficient amount of the human genetic code qualify for special treatment.

Warren dismisses this criterion with some alacrity. She thinks that moral criteria cannot arise simply from evolutionary accidents of birth. I would add that it is not at all clear from evolutionary biology that the idea of a shared genetic humanity makes sense.

Although humans do share a large amount of their genetic code, it is also true to say that evolutionary thinking is anti-essentialistic in its thrust. In other words, post-Darwin it doesn't make sense to see humanity as some sort of fixed, immutable essence shared by all human beings.

This is certainly a more robust moral criterion, but it suffers from some problems. First, it is not clear which beings have sentience and which do not. Philosophers are fond of informing us that our friends and family could be zombies, who look and behave as normal humans do but have no conscious experiences.

Dismissing such philosophical concerns (as we must) we might propose that a minimum condition for sentience is the possession of a nervous system, along with some basic behavioural responsitivity. It is suggested that foetuses only develop these properties in the second trimester. Thus early-term abortions would be acceptable and late-term abortions would not.

There are two problems with this criterion. First, it too is over-inclusive as it covers a large swathe of the animal kingdom. Put it this way: a fly has a functioning nervous system, does this mean swatting a fly is morally condemnable in the same way that homicide is? Second, the criterion does not, by itself, establish any exception clauses. It cannot be that all sentient beings must be preserved irrespective of the harm it does to other sentient beings. And yet this is exactly what some women claim arises in the case of the foetus, i.e. that it does them harm.


4. Personhood
The fourth proposed criterion is personhood. This is a somewhat nebulous concept. It is usually associated with what we might call "higher" mental capacities. In particular, the capacity for developing hopes and aspirations for the future.

Warren disagrees with these traditional conceptions of personhood. She argues that what is truly distinctive about persons is their capacity for moral reciprocation. That is: their ability to recognise other people as being the possessors and holders of moral rights.

Foetuses almost certainly do not have this capacity for moral reciprocation (they cannot appreciate that their mothers, say, have moral rights). The problem is that neither do young children or mentally handicapped adults. 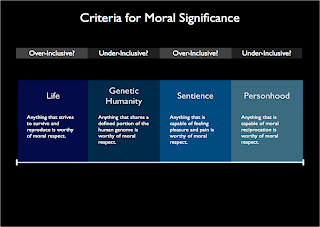 Is Birth Morally Significant?
The problem in identifying a clear moral criterion leads Warren to consider a different issue: the unique biological relationship between a mother and a foetus.

Birth becomes a morally relevant demarcation because it is the point at which the child can be offered equal basic rights without violating anybody else's moral rights.


Potential Persons?
Finally, Warren addresses the potential person argument. This is the idea that a foetus has certain minimal moral rights due to its potential to develop into a full human being (with full moral rights).

The problem with this is that in no other domain would a potentiality argument work. For instance, Warren argues that every child born in America is a potential voter. But this does not mean they should be accorded a right to vote (note: I think there is a need to unpack that analogy in a bit more detail, but since Warren does not go into it, neither will I).


Furthermore, the potentiality argument goes too far. Every possible sperm-egg fusion is a potential life. Does this mean we have to expend resources ensuring that every sperm finds an egg?