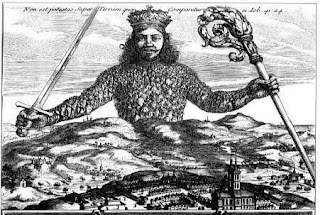 Thomas Hobbes has always held a particular fascination for me. I am drawn to his unrelentingly mechanical understanding of human behaviour and his valiant attempts to derive a moral theory from this mechanistic understanding. I'm not convinced that he succeeds in his attempts (can anybody?), or that his solution is pleasant, but he is still worth reading; there is a breathless, urgent and poetic quality to his prose.

One of my favourite works of Hobbesian scholarship is David Gauthier's The Logic of Leviathan: The Moral and Political Theory of Thomas Hobbes. It was published in 1969 and was, as far as I know, one of the first attempts to undertake a game theoretic analysis of Hobbes's work. Of course nowadays it has become de rigeur to highlight the similarities between Hobbes's state of nature and the prisoner's dilemma.

Anyway, over the next few posts, I want to go through Gauthier's chapter on Hobbes's moral theory. I think it is informative, thought-provoking and will find a congenial home in my swelling archive on moral theory.