Corvino on the PIB Argument (Part One)

I’m currently doing some research into natural law and the same-sex marriage debate. This accounts for my earlier post on the impeded function argument against gay sex. This has proved (mildly) controversial in some quarters, but I’m going to persevere with the topic nonetheless. Why? Well, as much as I would personally like the debate to be put to rest (in much the same way as the debate over the morality of slavery has been put to rest) I think we are forced to live through the final stages of this battle. If we sit back and presume that the pro-same sex marriage side will win, we may be disappointed. Thus, I feel that if people are sincerely convinced by (what I think are bad) arguments against same-sex marriage and homosexuality more generally, it is incumbent upon me to point out the errors of their ways.

In that vein, today I’m going to start the first of a series of posts on John Corvino’s article “Homosexuality and the PIB Argument”. Corvino is a philosopher and a gay rights campaigner. He has a number of books, journal articles and columns on the morality of homosexuality. He also does a pretty funny talk on university campuses called “What’s Morally Wrong with Homosexuality” in which he debunks some common arguments against homosexuality. Extracts from this can be found online.

In the remainder of this post, I will look at Corvino’s initial presentation of the PIB argument, along with his rejection of some of the typical responses to it from defenders of homosexuality. In future posts, we shall follow Corvino in refining the argument and presenting a better response to it.


1. What is the PIB argument?
The PIB argument is a slippery slope argument. It claims that if we permit homosexuality, we will also end up permitting polygamy, incest and bestiality. Slippery slope arguments have a common structure. I discussed this structure once before when looking at Douglas Walton’s work on argumentation schemas, but Corvino presents a slightly more general and less complex version of the same thing. As follows:


The “slippery slope” is here represented by the transition from P to Q and Q to R in the first premise of the argument. In reality, the number of “steps” from the top to the bottom of the slope can vary greatly. Indeed, it is possible to have a slippery slope argument that has just one step, i.e. “If P then Q; Q is unacceptable; Therefore, P is unacceptable”; it is also possible to have a slippery slope argument with a large number of steps. As we shall see in a moment, Corvino’s initial presentation of the PIB argument has just one step.

So the question arises: does the PIB argument work with a causally connected or a logically connected slippery slope? Corvino claims that the causal interpretation of the PIB argument has little support. There seems to be no evidence to suggest that people who tolerate homosexuality are more likely to tolerate polygamy, incest or bestiality. What’s more, some proponents of the PIB argument have acknowledged this point. This suggests that the logical interpretation is more plausible, with the idea being that the moral principle from which we derive the permissibility of homosexuality would also logically entail the permissibility of polygamy, incest and bestiality. As follows:


Obviously, there are two ways to respond to this argument. The first is to reject (1) and argue for some morally significant distinction between homosexual relationships and PIB relationships. The second is to deny (2). While there are, perhaps, some sexual libertarians who would adopt this second approach, the vast majority focus their attention on premise (1). In the remainder of this post, we will consider two responses to premise (1) that Corvino ultimately finds unsatisfactory.

2. Andrew Sullivan’s Objection to Premise 1
Andrew Sullivan is a hugely popular journalist and blogger over at the Atlantic . He is also a long-time campaigner for marriage equality. In the course of one his many articles on the topic, he presented what Corvino calls the “gays really exist”-objection against premise (1) of the PIB argument. The objection works off the idea that a preference for homosexual relationships is a deep and constitutive part of a person’s identity, in a way that a preference for polygamous, incestuous or bestial relationships is not. 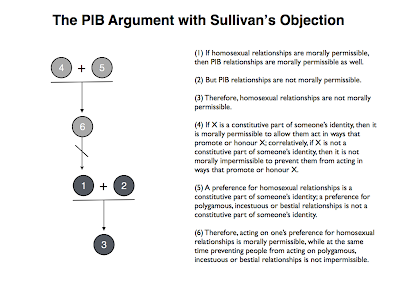 I have to say, in the past, I’ve used something like Sullivan’s response myself when presented with the PIB argument. But Corvino finds it unsatisfactory and I’m fascinated to see why.

As a first step towards dismissing Sullivan’s objection, Corvino identifies three different ways in which to interpret the idea that something is a “constitutive part” of a person’s identity. The first is to view homosexuality as immutable; the second is to view it as central to the homosexual’s self concept; and the third is to view it as being intimately tied up with the homosexual person’s capacity to love. Let’s discuss each in turn.

3. The Immutability Interpretation
The immutability interpretation points to the fact that a preference for same-sex relationships can be a non-voluntary and unchangeable aspect of a person’s identity. This would all seem to be true (despite the claims of fringe groups who try to “cure” homosexuals). It would also seem to be true - although I can’t say for sure - that a preference for PIB relationships lacks this immutability.

The important question is whether the immutability is morally important. And it is here that Corvino finds fault. He points out that the proponent of the PIB argument must draw an analogy between homosexual relationships and PIB relationships. This, after all, is what makes the first premise of their argument work. But two things that are analogous are not going to be similar in all respects. So if we simply point to one difference between homosexual relationships and PIB relationships, it is perfectly possible for the proponent of the PIB-argument to respond with a “so what?”.

Corvino strengthens this observation with an example. Suppose Jack says polygamy and homosexuality are morally equivalent because they both involve the relaxation of traditional sexual norms. Suppose Jane replies by saying “but polygamy is more expensive!” (think of all the gift-giving and anniversary-remembering that must go on). Surely, Jack would be right to say “so what? Expense is not a morally significant variable here”? And since a similar response is open to the proponent of the PIB argument in the fact of the immutability objection, that objection is, according to Corvino, unpersuasive.

I’m actually amazed that Corvino leaves it at that. While I agree that a similar response might be open to the proponent of the PIB argument, he has done nothing yet to show that one actually is. In other words, he has done nothing to show that immutability is not a morally significant variable. I might be able to do his work for him in that I have one reason for suspecting that immutability might not be morally significant. For example, I think it could be true that many paedophiles have immutable sexual preferences (I don’t know for sure) but I don’t think that is a reason for thinking their conduct is morally permissible.

Slight digression : But then what do I say when pressed to distinguish paedophilia from homosexuality? I’ll usually turn to the twin ideas of consent and autonomy: I think adults can enter into whatever sexual relationships they like with one another as long as it is on consensual terms. This distinguishes paedophilia from homosexuality. The problem is, when we return to the PIB argument, although this might allow me to stop the slide from homosexuality to bestiality (since I don’t think any animals are capable of consent), it doesn’t stop the slide from homosexuality to polygamy and incest since both could be entered into on consensual terms. Thus the search for a principled distinction will need to continue.

4. The Self-Concept Interpretation
The second interpretation of Sullivan's argument claims that a preference for homosexual relationships is an important part of a homosexual person’s self-concept, in a way that a preference for PIB relationships is not an important part of the self-concept of those who may be inclined toward them.

Corvino sees two problems with this. First, it is open to the same objection as the immutability interpretation. In other words, the proponent of the PIB-argument can claim that importance to self-concept is not a morally relevant distinction. Second, and perhaps more significantly, they can argue that there is no disanalogy in this respect. After all, polygamy is a central part of (some) religious doctrines and what could be more central to a person’s self-concept than their religious identity? It could also be that incestuous or bestial preferences are thought subjectively essential to the self-concepts of those who have them.

The important point here seems to be that the mere subjective importance of a preference to a person's self-concept is (a) not that difficult to achieve and (b) not clearly morally significant. Thus, if Sullivan’s objection relies on this understanding of “constitutive part”, it would seem to fail.

5. The Capacity to Love Interpretation
The third interpretation of Sullivan's argument is probably the strongest. According to this interpretation, the ability to act upon a preference for homosexual relationships is not just subjectively important to the homosexual, it is essential in order for them to experience love. They cannot experience love in a heterosexual relationship. So to deny a homosexual the right to act upon their preferences would be to deny them the ability to experience one of life’s great goods: love.

Can the same be said about those with preferences for PIB relationships? Corvino thinks not. No one seriously seems to think that those who desire polygamous, incestuous and bestial relations are incapable of experiencing love in alternative types of relationship. Thus to prevent them from acting on their preferences is not to deny them access to a great good.

These thoughts can form the basis of a revised argument against premise (1). We call this the equal options argument because it is simply calling for homosexuals to have the same options open to them as heterosexuals. The option being, of course, the right to have access to one of life’s great goods. This argument is originally found in the work of Jonathan Rauch and replaces Sullivan's argument. 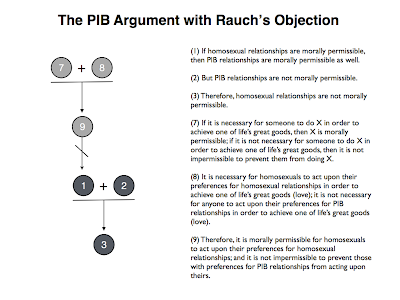 Is this argument better than our original formulation of Sullivan’s argument? I have to say I find it reasonably persuasive, but Corvino thinks it's still lacking. As he sees it, this argument is claiming that homosexuals are placed under a burden in not being able to access love. This burden is not shared by heterosexuals and so it is for the burden to be placed on homosexuals. (Note that my version of the argument is not expressed in these distributive justice/egalitarian terms but I think Corvino's subsequent criticism may still apply...)

According to Corvino, the proponent of the PIB argument can respond to this by saying that the reason they group homosexuality with PIB practices has nothing to do with unfair burdens or other extrinsic factors like access to great goods. Instead, the proponent of the PIB argument can say that their lumping together homosexuality with PIB has to do with the intrinsic nature of those practices. It is that intrinsic nature that is morally questionable, not the instrumental role of the practice in securing other morally recognised goods.

So Corvino is unhappy with current responses to the PIB argument. He wants to do better. Can he do so? We’ll see what he comes up with in future posts.
Posted by John Danaher at 3:29 PM