The Impeded-Function Argument against Gay Sex 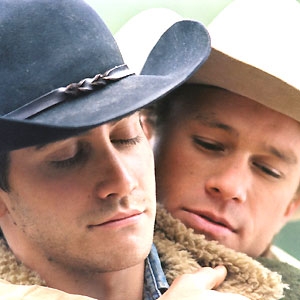 Natural law is a perennially popular brand of meta and normative ethics. It is most closely associated with Catholicism, but has its origins in the work of Aristotle and has been redressed in secular garbs by its most recent proponents. It’s difficult to offer a forty-five second summary of a 2000+ year tradition, but this is my best shot:


The world consists of discrete entities, events, and states of affairs. These entities, events, and states of affairs can be classified according to type (genus, species etc.). Each of these classes has a certain purpose or telos: a function that it is supposed perform or a role it is supposed to fulfill. We belong to the general class of human beings. One of the chief functions of human beings is the exercise of their practical reason, i.e. their ability to reason about means and ends. Through the exercise of their practical reason human beings discover certain basic goods . These are states of affairs that are intrinsically good for them, in light of other aspects of their nature. The goal of ethics is to help them to properly orient themselves to these basic goods. If they engage in activity that compromises or damages these basic goods, they are doing something that is prima facie morally wrong.

I swear that was the best I could do. See here for more.

Anyway, in this post, I want to consider one popular natural law-style argument against homosexual activity. I do so because this is an argument that has gained serious traction in some quarters and it’s worth trying to understand it. I base what I am going to say on an excellent little article that appeared in the Spring 2011 APA Newsletter. The article was “A Critique of the Impeded-Function Objection to Gay Sex” and it was written by Stephen J. Sullivan. It’s a great example of how to do good philosophy in a short space. I wish I could emulate it in my own work…sigh.


1. The Impeded-Function Argument
Go back for a moment to my forty five second summary of natural law. Remember all that talk about basic goods, and functions that ought to performed? How do you suppose natural lawyers apply these concepts to the issue of sex? Unsurprisingly, they tend to argue that the sex organs have a certain natural function, and that any attempt to compromise or impede this function is, at a minimum, morally questionable and, more than likely, morally wrong. No prizes for guessing what that function is.

This gives rise to something Sullivan calls the impeded function argument against gay sex. As follows:

This distinction is important because, as Sullivan points out, too often critics of natural law ignore it. For example, they might point to the fact that many of us - myself included, wear eyeglasses that rest upon the bridge of our noses. Being an appropriate resting place for a pair of glasses is certainly not the biological function of the bridge of the nose. At the same time, we couldn’t possibly think that there was something morally objectionable about wearing glasses. And so the natural lawyer is wrong to see biological function as the standard of moral propriety.

2. Counterexamples that Work
If we are to defeat the impeded function argument, we need to come up with proper counterexamples, ones that involve morally unobjectionable scenarios in which we impede the biological function of our bodily organs. Can we do so? Sullivan says his students have been doing it for years, often with more aplomb than professional philosophers. He lists the following as being proper counterexamples to the natural lawyer. I’ll run through them in a little detail:

A. Keeping one’s eyes closed or wearing a blindfold: The biological function of the eyes it to collect light and transduce it into a electrical impulse so that the brain can construct a visual image of the world. By closing your eyes, or by wearing a blindfold, you are actively preventing your eyes from performing this function. But there’s nothing morally objectionable about doing so, is there?

D. Taking antihistamines when undergoing an allergic reaction: Antihistamines, as the name suggests, stop our white blood cells from releasing histamines. But histamine-release is part of the natural immune response of the human body. It is a way of dealing with invading pathogens. Is the practice of prescribing and taking antihistamines consequently immoral?

E. Administering anaesthetic to inhibit pain: Again, the pain response is a core component of the body’s natural defences. Without the pain response our health would actually suffer (as is clear from studying people who lack a pain response). Anaesthetics are designed to dampen or eliminate our ability to experience pain thereby inhibiting a natural function. So are doctors acting immorally when they administer anaesthetics before surgery?

F. Shaving one’s head or face: I’m actually not entirely sure what the biological function of hair is. I’m guessing it has something to do with keeping the body warm, protecting the skin and other bodily organs from irritants. So in shaving or removing hair we are preventing hair from performing its biological function. Again, is this really immoral?

Sullivan actually lists a couple more examples, but I’ll limit myself to these six. Hopefully, it’s relatively clear how they challenge the impeded-function argument. They do so by directly undermining premise (2). Since I want to draw up an argument map at the end of this post, and since I want the map to be of a manageable size, I’ll summarise all six counterexamples as a single premise:


Does this response work? Sullivan thinks not. For one thing, it weakens the force of the objection to gay sex. Individual acts of gay sex would not permanently impede the procreative function of the sex organs; only an irreversibly exclusive homosexual lifestyle would be deemed immoral on (6). This is unlikely to appeal to the natural lawyer since they will typically believe that the individual acts are also immoral. This raises a further point. Many natural lawyers object to other non-procreative sexual acts (masturbation, non-vaginal intercourse, use of temporary contraceptive devices etc.) on grounds similar to those used to reject gay sex. But under (6) all of these acts would be deemed morally acceptable too.


The second likely response will be to highlight the fact that many organs serve multiple biological functions. This fact can be used to construct a new natural law principle. This principle would maintain that it is morally acceptable to undermine one biological function as long as you leave another intact. For example, the mouth is designed for talking, eating and breathing. By talking, you prevent the mouth from being used for breathing (at least intermittently), but you do nothing immoral by doing so.


Whether this principle works to explain our reactions to the six counterexamples given above is doubtful, but we won’t focus on that here. Instead, we’ll focus on the more important question as to whether it works to impugn the morality of gay sex. The answer would seem to be “no”. After all, the sex organs could serve multiple functions, some of which are not impeded by homosexual activity. For example, it has been suggested that joint sexual activity (of any kind) helps people to bond together through the release of certain hormones. And since bonding is an important precursor to securing some of the basic goods beloved by natural lawyers (e.g. friendship, and play) it would seem that gay sex should, at least in some instances, be encouraged.


The third likely response will be to argue that it is morally acceptable to impede a biological function, provided that you have other means of performing that function. This would work quite well in explaining our response to the head-shaving case mentioned above. Although hair may serve an important function in keeping us warm and protecting us from the elements, we can achieve both of these ends by wearing hats and other protective clothing.


The problem is that this principle doesn’t work to impugn gay sex either. After all, with the advent of reproductive technologies, and with the probable future developments in that area, homosexuals are not prevented from procreating.


The fourth and final likely response will be to highlight the different considerations that apply when important biological functions and other morally acceptable goals conflict. For example, in the antihistamine example, although it is true that histamine-release is an important part of the body’s immune response, it is also true that histamine-release can impair the biological functions of other body parts. For example, breathing can often be impaired by allergic reactions. Something similar is true in the anaesthetic case. This suggests that maybe their needs to be some appreciation of tradeoffs incorporated into natural law. I’m going to go with some form of consequentialism:


How might this apply to the issue of gay sex? Well, it would seem relatively easy for us to argue that despite impeding the procreative function, gay sex facilitates a greater number of biological functions (or basic goods) than would the alternative of heterosexual sex, for at least some people. Sullivan, for instance, argues that homosexuals may not be able to achieve bonding through heterosexual sex acts.


Okay, that brings us to the end of this post. The completed argument map is below. 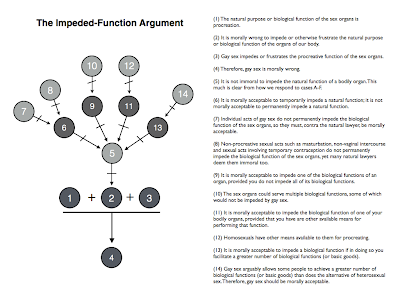