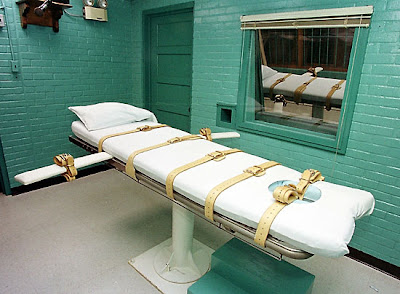 This is the second part in a brief series of posts looking at Benjamin Yost’s discussion of the Irrevocability Argument against capital punishment. As explained in part one, the Irrevocability Argument claims that the death penalty is a morally illegitimate system of punishment because it is not substantially revocable. That is to say, unlike other forms of punishment which can be corrected if they are wrongfully imposed, the errors of wrongful execution cannot be corrected. Once a person is dead, they’re dead. You cannot make it up to them.

In part one, we looked at Michael Davis’s objection to the Irrevocability Argument. According to Davis, the death penalty is substantially revocable because it is possible to benefit a person after they die. This can be supported by direct appeal to the Pitcher-Feinberg theory of posthumous harms. This theory holds that a person is benefitted if their interests are satisfied or fulfilled. And since a person’s interests can outlast their physical lives, it follows that they can be benefitted after they die. Davis merely adds to this the claim that the posthumous benefit can be sufficient to outweigh or counterbalance the harm done by their execution. Thus, we get the following argument:


Clever and all as this argument is, it is open to at least two criticisms. The first targets premise (4) and argues that substantial revocability cannot be reduced to compensation. The second targets premise (5) and argues that the Pitcher-Feinberg theory is flawed. We’ll look at both today, in reverse order. As we shall see, in his analysis, Yost thinks the first criticism is the better bet, but it’s worth exploring the second one anyway.


1. Problems with the Pitcher-Feinberg Theory
The Pitcher-Feinberg theory analyses harm and benefit in terms of the interests and preferences of the person. A thwarted interest is a harm, and a satisfied interest is a benefit. Using carefully crafted thought experiments, like the “Mortal Metaphysician” example discussed in part one, proponents of this theory show that posthumous harm/benefit is plausible. But despite the prima facie plausibility of these thought experiments, two critical questions can be asked:

(A)The Subject Question: Who exactly is being harmed or benefitted in this situation?

(B)The Causation Question: If a person can be harmed or benefitted after they die, does this not require some spooky backwards causation?


The questions are connected, in that answering the first in a particular way concedes some ground to the premise of the second question. If one claims, as Pitcher does, that the only plausible candidate for a subject of harm/benefit is the ante-mortem person (since the post-mortem person is just dust in the grave), then one naturally encounters the charge of backwards causation. But how serious a charge is this?

Thought experiments and analogies ride to rescue here. Consider the following scenario: Shortly after Barack Obama’s exit from the presidency in 2016 (or, rather, Jan. 2017) the world is struck by a gigantic meteor that wipes out all of human civilisation. This has the curious effect of making Barack Obama the penultimate president of the United States. In other words, it adds a property to the pre-2017 presidency that wasn’t there before. But this doesn’t require any spooky backwards causation. Why couldn’t posthumous harms be the same? In other words, why couldn’t attaching the properties of harm and benefit to the ante-mortem person be like attaching the property of “penultimacy” to the president?

Here, we get into a war of intuitions and thought experiments. Critics like James Stacey Taylor argue that the property of penultimacy is unlike the property of harm/benefit in that it is a sequential property and they are not. This may indeed be true, but it’s not at all clear that this is a relevant disanalogy, i.e. one that undermines the original claim. What may be going on is that there is a battle being waged between two different theories of harm and benefit: the interest-based account of Pitcher and Feinberg, on the one hand, and the experiential or Epicurean account, on the other.

Classically, a person is defined as a continuing subject of experiences, or an overlapping set of psychological states. According to the experiential account of harm/benefit, a person can only be harmed/benefitted if there is some change in those experiences. So, for example, according to this account, my wife’s death harms me if (and only if) I become aware of it. This conception does not allow for posthumous harm/benefit. After all, once the person is dead, the continuing subject of experiences ceases to exist, and so there can be no further changes to what they experience. Another way of putting it is that this view requires some intrinsic change in the person before there can be harm or benefit. Contrariwise, the Pitcher-Feinberg theory allows for extrinsic changes to harm or benefit the person.

At this point, one is reduced to a battle between two opposing views, with little common ground between them. Defenders of the Pitcher-Feinberg theory will cling to their thought experiments and the seeming plausibility of their view, while defenders of the experiential account will cling to the intuitive good sense of theirs. Shelley Kagan tries to broker peace between the two sides by distinguishing between two potential loci of harm/benefit: (i) lives; and (ii) persons.

According to Kagan, every person has a life (a biography or set of interests) that it is possible to harm (or benefit) extrinsically; while at the same time the person themselves is indeed a set of experiences that can only be harmed (or benefitted) intrinsically. Thus, for Kagan, the Pitcher-Feinberg thought experiments provide support for the view that lives can be posthumously harmed/benefitted, whereas it remains true that persons cannot.

Where does this leave us? Well, if one accepts Kagan’s distinction between lives and persons, Davis’s challenge to the Irrevocability Argument is still viable. The premises need to be rewritten to acknowledge the distinction, but one could nevertheless argue that a person’s life can be compensated after they die (as the discussion in part one suggested). But there are still difficulties, in particular one might argue that even if lives can be benefitted, the notion of compensation is distinct. Only persons can be compensated. That would be an interesting criticism, but Yost avoids it because he thinks there is a bigger problem with the reduction of substantial revocability to compensation. We close by looking at that problem.


2. Substantial Revocability, Compensation and Control
Premise (4) states that a punishment can be substantially revoked if the harm done by the punishment is outweighed or counterbalanced by the benefit of the compensation. That sounds plausible enough until you probe a little deeper. When you do, you’ll discover, as Yost argues, that revocability cannot be reduced to compensation.

This discovery is prompted by the fact that, if revocability were reducible to compensation, it would be possible to compensate someone who was imprisoned, but still keep them in jail. Consider once more the case of the single father, who’s one wish in life is to make sure his daughter has a better life than him. Suppose he is wrongfully imprisoned, and the error is later discovered. He initially looks forward to his release, but is told that this would send a bad signal to other would-be criminals. The state is trying to look tough on crime, and their team of psychological advisors have informed them that releasing a prisoner, even a wrongfully imprisoned one, would damage the deterrent effect of incarceration. So the man is offered a deal: if he stays in jail, the state will provide a top-class education for his daughter, and make sure she secures a high-powered position within the civil service. The man readily agrees.

In this hypothetical scenario, the compensation paid to the man’s daughter would clearly seem to outweigh (or counterbalance) the harm done to him by the incarceration. But he nevertheless continues to be punished. Surely this is absurd? Surely one cannot substantially revoke a punishment, while leaving it in place? Thus, we seem to have a reductio of premise (4):


Thus, premise (4) is rebutted. One could leave it there since Davis’s argument depended on that premise, but one would be unwise to do so. If one did, it would remain open to someone to invent a new account of substantial revocation which corrected for the flaw in Davis’s account. Yost avoids this by providing an additional argument to the effect that an essential element of substantial revocation would never be possible in the case of the death penalty.

What is this essential element? It is the restoration of control or autonomy. As Yost sees it, modern liberal democracies are founded on respect for the moral and practical autonomy of their citizens. The foundational principle of most liberal theories (e.g those propounded by Hobbes, Rawls or Gaus) is that people are moral equals. Which is to say, no one can claim coercive moral authority over another without good moral reason. So one of the legitimacy conditions for a state is that it respect the moral autonomy of its citizens: if it is going to restrict or coerce them in some way, it better have a damn good reason for doing so.

Punishment is an exercise of coercive moral authority: in punishing a person, the state deliberately harms and coerces them in order to serve some moral end. As such, they violate the moral autonomy of the person being punished. If the state is supported by good moral reasons when doing so, then maybe that’s okay. But if the state makes an error, the harm done by the violation of moral autonomy must be corrected. Yost argues that the only way to do this is by restoring control to the person punished. (Note: his account of control is metaphysically modest, assuming only that compatibilist control is possible).

Now comes the clincher: you cannot restore autonomy or control to a dead person. They are dead. So even if you could compensate them by satisfying their interests, you could never substantially revoke their punishment in the manner required in a liberal democracy. In other words: 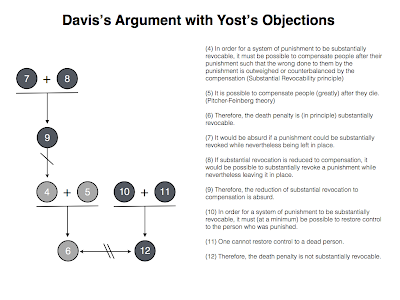 3. Conclusion
To sum up, the Irrevocability Argument is a powerful, conceptual argument against the death penalty. If one accepts that, in order to be morally legitimate, a system of punishment must include some capacity for error correction or revocation, then the fact that the death penalty is irrevocable counts against it. But, as we have seen, it is possible to challenge this argument by claiming that, contrary to what one might think, the death penalty is substantially revocable.

In this series of posts, we have seen how it is possible to defend this notion by reducing revocation to compensation, and arguing that one can harm or benefit a person after they die. However, we have also seen that the theory of posthumous harm and benefit is open to criticism, and that the reduction of revocation to compensation is not satisfactory. If these critiques are right, then the Irrevocability Argument is left standing. A useful weapon in the arsenal of the abolitionist.