The Ethics of Prostitution (Part One) 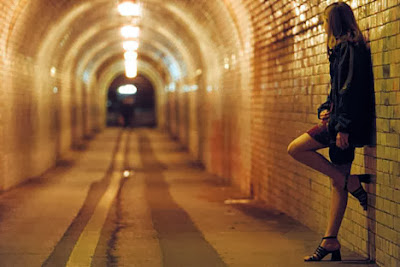 Is there something ethically wrong with exchanging sexual services for money? Many people frown upon it. Traditional, conservative moralists view it as a taboo, (some) feminist scholars think that it exemplifies and contributes to a culture of male domination, and even those in favour of liberalisation and decriminalisation tend to stigmatise (or look down upon) those involved in the sex trade.

But should this be the case? Should prostitution attract moral censure? In this series of posts I want to address these questions. I do so by looking at Ole Martin Moen’s article “Is Prostitution Harmful?”, which appeared in the Journal of Medical Ethics in 2012. I will also look at some critiques of Moen which have appeared in the same journal.

Moen’s article has a structure and style of argument that I find appealing. Starting with some basic assumptions about the nature and quality of sexual activity, he makes a prima facie case for the permissibility of prostitution. He then systematically responds to nine counterarguments. This makes it easy to parse, and easy to map the argumentative structures involved. This is something I’ll do as I work my way through the piece.

In the remainder of this post, I’ll look at Moen’s prima facie case for permissibility, and three of the objections to his view.


1. Starting Assumptions about the Nature of Sex
Building upon some work done by David Benatar, Moen identifies two general views one could have about the ethics of sexual activity:

The Strong Significance View: Sex is only permissible when it is the expression of romantic love (i.e. when it has romantic significance).

The Weak Significance View: Sex is permissible when it is an expression of romantic love, and also, sometimes, when it is not.


The weak significance view embraces the permissibility of casual sex. That is: ephemeral (or ongoing) sexual hook-ups between consenting adults with a minimum of emotional or psychological baggage. The strong significance view rules these out. If we assume that the weak significance view is correct, then we should also embrace the permissibility of (at least some types of) prostitution. Or so, at least, Moen argues. For if sexual activity is unobjectionable when it is without romantic significance, then what is the harm in the commodification of such activity? What can money add to the transaction that transforms it into something worthy of moral censure?

“Lots”, you’ll cry. But be patient, we’ll get to the standard objections in a moment. For now, we’ll focus on the prima facie claim. For my part, I think Moen’s starting assumptions touch upon something important, something I’ll call the intrinsic unobjectionability of sex. This is the notion that, in and of itself, the activities involved in most sexual practices are morally unobjectionable (certain extreme forms of S&M might be special cases, requiring independent consideration). This should be unsurprising given that sex is often deemed to be an important, and valuable part of human life.

What makes a moral difference are the properties that are associated or combined with these acts. These come in two main varieties: (a) the beliefs and attitudes of the participants to the acts; and (b) the downstream consequences or effects of the acts. Thus, for example, rape and sexual assault are objectionable because one (or more) of the parties to the sexual activity lacks consent. This is what transforms what is otherwise acceptable into something that is unacceptable. In a similar vein, sexual activity that is carried out with the purpose (and effect) of humiliating or exploiting someone for gain is objectionable (e.g. as in sexual blackmail through the release of sex tapes).

If we accept this basic picture of sexual activity, we have a model for how to argue and reason about the ethics of sex. In particular, we know not to look directly at the sexual acts themselves (except in the extreme cases mentioned above) but rather to the extrinsic properties that can be associated with those acts. Are these objectionable? Are they dissociable?

In the case of prostitution, we are always looking the combination of sex with a monetary (or other economic) exchange. We are wondering whether the combination of the two is enough to transform what is otherwise unobjectionable into something that is. Moen wants to argue that it is not, that adding the economic exchange to sex makes no more difference than adding an economic exchange to other unobjectionable activities. Is he right? Let’s see.


2. The Psychological Harm Argument
One of the simplest argument against prostitution points to its deleterious psychological effects. Surely, we might say, there is something emotionally damaging about constantly selling sexual services? The argument can be run like this:


Interestingly, that’s where Moen cuts off the argument in his article. This is because he interprets all nine objections to prostitution in terms of harmfulness. Nevertheless, the implication in his discussion is that kind of harm singled out by these arguments is sufficient to render prostitution worthy of moral censure or prohibition. Thus, one could tack on the following two premises to each of the arguments in this series:


Of course, tacking on these premises reveals a crucial weakness: not everything that is harmful is worthy of moral censure. Indeed, Moen exploits this weakness toward the end of his article when he suggests that, even if prostitution is harmful, we need to weigh the costs and benefits. It is also something he exploits here when dealing with the merits of the first part of the argument.

What then of that first? Interestingly, Moen concedes the gist of its two premises. In fact, he goes out of his way to highlight research showing that prostitutes suffer from panic attacks; eating disorders; depression; insomnia; guilt; regret; remorse; and that they have a suicide rate that is six times that of the average population.

This seems like a significant concession, but it is at this point that Moen emphasises one of his methodological constraints. Since we are asking whether prostitution is worthy of moral censure, we cannot use the fact that most people think it deserves moral censure, or the fact that these beliefs have certain consequences, as evidence in support of our view. In other words, we cannot use the fact that prostitution is stigmatised, marginalised, and driven underground as evidence in favour of its prohibition.

Moen gives the example of homosexuality. As he points out, historically homosexuals suffered from similar psychological problems (and possibly still do). But with the exception of some conservatives, no one now thinks that this is a sufficient reason to prohibit or censure the activity. Why not? Because many of the psychological problems are thought to be driven by the traditional taboo against homosexuality: it is because people stigmatise and censure that activity that those who engage in it feel guilty, shameful etc etc.. The arrow of causation is the reverse of what we was traditionally believed.

Moen is clear that he is not claiming that homosexuality and prostitution are perfect analogues. Far from it. All he is saying is that the mere fact that a particular kind of sexual practice is correlated with a particular set of psychological problems is not enough to support the desired conclusion. We’ll have to point to some plausible psychological mechanism that explains those correlations, and we may find that those mechanisms point in the opposite direction from what we initially believed.

How best to interpret this objection? I think it’s best understood as a rebuttal to premise (2), above. It challenges the claim that prostitution actually “leads” to psychological problems:


This is illustrated below. 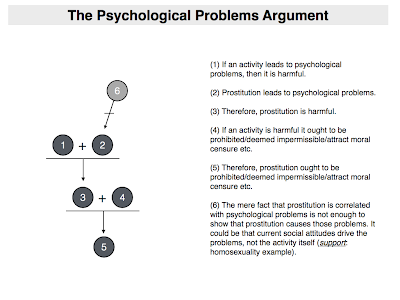 3. The Correlation with Danger Argument
With certain exceptions, prostitutes and prostitution have an unglamorous reputation. The stereotypical image is that of a poverty-stricken, drug-addled woman who sells sexual services out of economic desperation, thereby exposing herself to all manner of risks. This stereotypical image suggests that prostitution may be correlated with more than mere psychological harms:


Moen’s response to this argument follows a pretty much identical pattern to what was just outlined. Again, he offers significant concessions to the second premise. He highlights research suggesting that prostitutes are at a higher risk of being physically abused and assaulted; that they carry increased risks of venereal disease; and that they are more likely to be involved in drug abuse and criminality.

But are these correlations ethically significant? The problem, once again, is that it could be the social (and oftentimes legal) prohibition of prostitution that gives rise to the increased risks, not the prostitution itself. Moen uses the example of homosexuality once more: when that was an underground, and socially stigmatised activity, it carried increased risks too, but that doesn’t mean it warrants censure.

One could argue that legal prohibition, in particular, makes prostitution a high risk activity. In many countries, prostitutes cannot organise into labour unions, legally work in brothels, hire security agencies to protect their workplaces, have standardised working contracts, be subject to health and safety inspections, and so on. Why not? Because their work is criminalised. Arguably, if one removed those legal barriers you would remove some of the risks.

This is a rebuttal to premise (8):


I agree with this idea in principle, though I am aware of some scholarship which suggests that the mainstreaming of prostitution is difficult, and far from a panacea. Is this because the commodification of sex is, itself, harmful, irrespective of its broader consequences? That’s what the next argument tries to suggest. 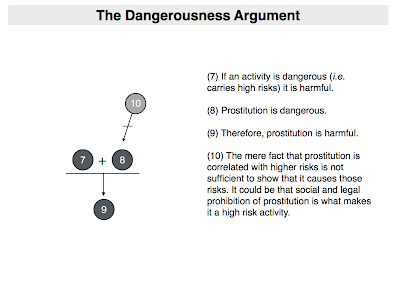 Narrow Objectification: Arises whenever a person is dealt with by force or fraud, and is manipulated and disposed of at the will of another.

Broad Objectification: Arises whenever a person is treated as a means to an end, not as an end in him/herself (Kantian objectification).


Moen readily concedes premise (11), but challenges premise (12). Certainly, there is no reason to think that prostitution necessarily involves force, fraud, manipulation and disposal. One could imagine someone freely and knowingly entering into a contract to sell sexual services, without such things being present. Furthermore, force, fraud, manipulation and disposal are problematic wherever they arise. They would render many other contracts and economic exchanges morally problematic too. But that doesn’t mean that those exchanges are inherently problematic. Why think the situation is any different for the sale of sexual services?


Then we have to consider the broad objectification argument:


Moen argues that both premises are questionable here. It has long been pointed out that Kantian-style objectification is not always and everywhere harmful. We instrumentalise one other constantly. Moen gives the example of the newspaper delivery boy (fast becoming a cultural artifact), who deliver his daily newspaper while he is still asleep. Clearly, Moen instrumentalises the boy in this economic transaction: he only cares about getting his paper, he does not care about the person who does it. But is this really harmful to the boy? It seems implausible. Other examples abound.

So we have rebuttals to both premises: 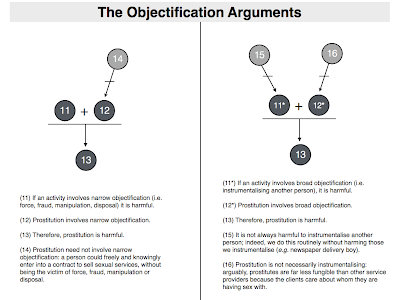 One thing I will say about all this is that there accounts of objectification that Moen passes over in his analysis. For example, Martha Nussbaum, in her famous article about the topic, identifies seven different aspects to objectification, ranging from fungibility to instrumentalisation to denial of subjectivity. These seven forms overlap with some of the concerns addressed by Moen, and I’m reasonably confident that similar responses could be offered to each of them. Nevertheless, their existence within the literature suggests that a more nuanced treatment of the objectification argument is possible.

That brings us to the end of the third objection. So far, Moen thinks that the prima facie defence of prostitution is still standing. Let’s see if anything changes the next day, when we look at the remaining six objections to prostitution.
Posted by John Danaher at 4:12 PM