The Argument from Abandonment and Suffering 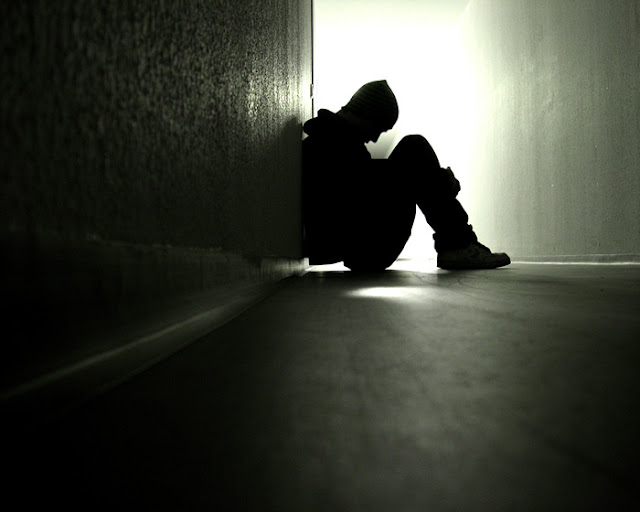 The argument from abandonment and suffering is a specific version of the problem of evil. Erik Wielenberg defends the argument in his recent paper ‘The parent-child analogy and the limits of skeptical theism’. That paper makes two distinctive contributions to the literature, one being the defence of the argument from abandonment and suffering, the other being a meta-argument about standards for success in the debate between skeptical theists and proponents of the problem of evil.

I covered the meta-argument in a previous post. It may be worth revisiting that post before reading the remainder of this one. But if you are not willing to revisit that earlier post, allow me to briefly summarise. Skeptical theism is probably the leading contemporary response to the evidential problem of evil. It casts doubt on our ability to identify God-justifying reasons for allowing evil. But skeptical theism is usually formulated in very general terms (e.g. ‘we wouldn’t expect to know all of the possible god-justifying reasons for allowing evils to occur’). Wielenberg’s meta-argument was that it is much more difficult to justify such skepticism in relation to specific instances of evil. In those more specific cases, there may be grounds for thinking that we should be able to identify God-justifying reasons.

And that’s exactly what the argument from suffering and abandonment tries to maintain. The argument builds upon the parent-child analogy, which is often used by theists to justify skeptical theism. So we’ll start by looking at that analogy.


1. The Limitations of the Parent-Child Analogy
I wrote a longish blogpost about the parent-child analogy before. That blogpost was based on the work of Trent Dougherty. Wielenberg effectively adopts Dougherty’s conclusions and applies them to his own argument. So if you want the full picture, read the earlier post about Dougherty’s work. This is just a short summary.

The parent-child analogy is the claim that the relationship between God and human beings is, in certain important respects, very similar to the relationship between a parent and a child. Indeed, the analogy is often explicitly invoked in religious texts and prayers, with their references to ‘God the father’ and the ‘children of God’. Proponents of skeptical theism try to argue that this analogy supports their position. It does so because parents often do things for the benefit of their children without being able to explain or justify this to their children. For example, parents will often bring their infant children for rounds of vaccination. These can be painful, but they are also beneficial. The problem is that the child is too young to have the benefit explained to them. From the child’s perspective, the harm they are suffering is inscrutable. The skeptical theists claim that we could be in a similar position when it comes to the evils that befall us. They may have some greater benefit, but God is simply unable to explain those benefits to us.

Proponents of the problem of evil are often unswayed by this line of reasoning. They accept that, in certain instances, parents are unable to justify what they do to their children, but this is usually a temporary and regrettable phase. When a child grows up and is capable of some understanding, however limited it may be, a loving parent will try to explain why certain seemingly bad things are, ultimately, for the best. Imagine if you had a four year-old child who had to have their leg amputated for some legitimate medical reason. This would, no doubt, cause some anguish to the child. But you, as a loving parent, would do your best to explain to the child why it was necessary, using terms and concepts they can grasp. What’s more, you would definitely not abandon the child in their time of need. You would be there for them. You would try to comfort and assist them. 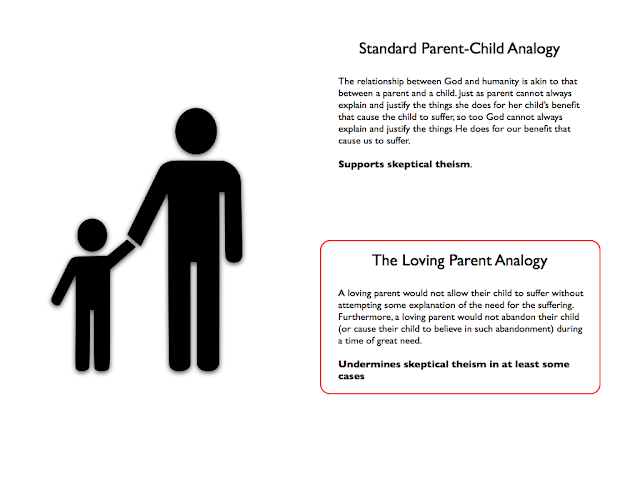 The result is that parent-child analogy can cut both ways. Skeptical theists and proponents of the problem of evil simply emphasise different features of the analogy. The theists highlight cases in which a parent is unable to explain themselves, but these are extreme cases. In many other cases, there is good reason to think that God (qua parent) would try to explain what he is doing to humanity and would not abandon humans during a time of great suffering and need.


2. The Argument from Abandonment and Suffering
It is precisely those latter features of the parent-child analogy that Wielenberg tries to exploit in his argument. His key observation is that there are cases of seemingly gratuitous suffering that are accompanied by a sense of divine abandonment (i.e. by a feeling that God is no longer there for you and that he may not even exist). He cites two prominent examples of this. One is that of C.S. Lewis, who famously experienced a sense of abandonment after the death of his beloved wife. Lewis wrote about this eloquently:

Meanwhile, where is God? ... [G]o to him when your need is desperate, when all other help is in vain, and what do you find? A door slammed in your face, and a sound of bolting and double bolting on the inside. After that, silence. You may as well turn away. The longer you wait, the more emphatic the silence will become.


The other example is that of Mother Teresa whose posthumously-published letters revealed that she felt a sense of abandonment throughout most of her life and suffered greatly from this. These examples are interesting because they involve prominent theists. But there are presumably many others who suffer and feel a sense of abandonment without ever recovering their faith. They might be even more potent in the present context.

The combination of such suffering and abandonment is particularly troubling for the theist. There are two reasons for this. One is because it runs contrary to the tenets of the parent-child analogy: the combination of suffering and abandonment is exactly what we would not expect to see if God is like a loving parent. The other is because the sense of abandonment often exacerbates and compounds the suffering. It is precisely because we lose touch with God that we suffer all the more. Again, this is not something we should expect from a loving parent.

To set out the argument in more detail:


This version of the argument is slightly different from the version that appears in Wielenberg’s article. The main difference being that I have divided his premise (4) into two separate premises (4) and (5). I did this because I wanted to highlight how the avoidability of the suffering and abandonment is an important component in the argument, and something that a clever skeptical theist might try to dispute (as we shall see in a minute).

On the whole, I think this is a strong atheological argument. I think the combination of suffering and abandonment is potent. And I think the traditional forms of skeptical theism are ill-equipped to deal with it. Wielenberg points out that because the argument is analogical it doesn’t really rely on an explicit noseeum inference. But even if you were to translate it into a form that did rely upon such an inference, the inference would be specific and justified. The whole point here is that we should not expect to see the combination of seemingly gratuitous suffering and abandonment if God exists. This is true even if there are goods and evils (and entailment relations between the two) that are beyond our ken. The result is that the likely explanation for the combination of seemingly gratuitous suffering and abandonment is that these cases involve actually gratuitous suffering, and this in turn is incompatible with the existence of God.


3. The Possibility of Positive Skeptical Theism
There is one potential response to the preceding argument. The response is implicit in the extant literature. This is DePoe’s positive skeptical theism. This version of skeptical theism differs from the others in that it doesn’t appeal to the mere likelihood of beyond-our-ken reasons for God’s allowing evil to occur. Instead, it argues that there are positive justifications for God’s creating epistemic distance between us and him.

DePoe’s position is thus slightly more theodical than skeptical. It builds upon theodical work done by the likes of Richard Swinburne and John Hick by arguing that there are reasons to expect a world in which God makes his existence uncertain. The reasons have to do with specific goods that are only possible if God’s existence is uncertain. For DePoe, there are two such goods worthy of particular consideration: (i) the possibility of a genuine loving response to God in faith; and (ii) the possibility certain acts of supreme human love and compassion (I seem to recall Swinburne arguing that genuine moral responsibility was only possible in a world with some epistemic distance). I would tend to question whether these are truly good (and not simply ad hoc responses to the problem of evil) and whether the goodness is sufficient to justify the kinds of evils we see in the world, but I will set those worries to the side.

Wielenberg argues that this is an unpromising line of response. The reason is that DePoe’s positive skeptical theism opens up the problem of divine deception. The argument here is a little bit tricky so I’ll try to set it out carefully. It starts with an assumption:

Assumption: There cannot be any actually gratuitous evils — they are incompatible with God’s nature.


This is an assumption we have been working with throughout this post and it is one that DePoe and many other theists accept. It creates a problem in the present context because, as was argued above, there do nevertheless appear to us to be cases in which evil is seemingly gratuitous. This means that DePoe must be committed to the following:

DePoe’s Commitments: God must have created the world in such a way that (a) there are no actually gratuitous evils but (b) there are many specific instances of evil that appear to us to be gratuitous.


This, in turn, implies:

DePoe must believe in a world in which God has arranged things so as to systematically mislead us as to the true nature of good and evil (i.e. as to what is actually gratuitous evil and what is not)


DePoe’s God is a deceptive god: He achieves the necessary epistemic distance by deceiving us as to the true nature of good and evil.


This is problematic. For one thing, the notion of a deceptive god may be incompatible with certain conceptions of divine moral perfection (viz. a perfect being cannot be deceptive). For another, once you accept that God is deceptive in one domain it becomes more likely that he is deceptive in others. This may undercut the warrant that a religious believer has in certain sources of divine revelation. It is unlikely that many theists will be willing to pay that cost. 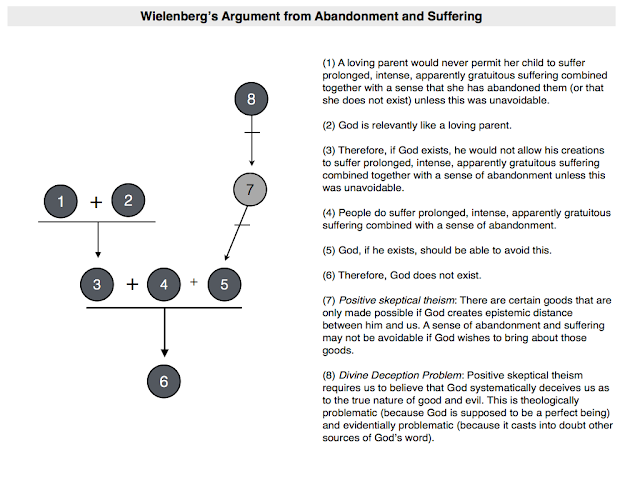 4. Conclusion
In sum, the argument from abandonment and suffering is a particularly strong version of the problem of evil. It highlights cases in which people suffer great harms and experience the absence of God. This is something we should not expect to see if God is like a loving parent. Would a loving parent really abandon her children (or cause them to believe in such abandonment) after they have suffered some great harm? Surely not. Yet God seems to do so repeatedly. Traditional versions of skeptical theism are ill-equipped to deal with this argument because in this case the noseeum inference is being explicitly justified. DePoe’s positive skeptical theism might proffer a response, but it does so at the cost of believing that God is a systematic deceiver.
Posted by John Danaher at 2:59 PM