The Shape of an Academic Career: Some Reflections on Thaler's Misbehaving 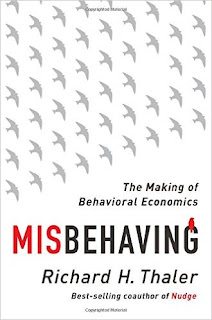 I have long been interested in behavioural science and behavioural economics — heck, I even wrote a masters thesis about it once. I have also long been interested in the nature and purpose of an academic career — which is not that surprising since that’s the career in which I find myself. It was for these two reasons that I found Richard Thaler’s recently-published memoir Misbehaving: The Making of Behavioural Economics to be an enjoyable read. In it, Thaler skillfully blends together an academic memoir — complete with reflections on his friends and colleagues, and the twists and turns of his career — and a primer on behavioural economics itself. The end result is a unique and reader-friendly book.

But I don’t really want to review the book or assess the merits of behavioural economics here. Instead, I want to consider the model of the academic career that is presented in Thaler’s book. This is something that has been bothering me recently. Wont as I am to philosophical musings, I do occasionally find myself waking up in the mornings and wondering what it’s all for. Why do I frantically read and annotate academic papers? Why do I try so desperately to publish an endless stream of peer-reviewed articles? Why do I clamour for attention on various social media sites? I used to think it was just because I have a set of intellectual passions, and I want to pursue them to the hilt. If that means spending the majority of my time reading, writing, and sharing my work, then so be it. As Carl Sagan once said ‘when you’re in love, you want to tell the world’ and if you’re in love with ideas, that’s the form that your expression takes.

More recently, I’ve begun to question this view of my life. To this point, I have pursued my intellectual interests in a more-or-less haphazard fashion. If I’m interested in something, I’ll read about it. And if I’m really interested in it, I’ll write about it. I don’t worry about anything else. I don’t try to pursue any grand research agenda; I don’t try to defend any overarching worldview or ideology; I don’t try to influence public debate or policy. The result is an eclectic, disjointed, and arguably self-interested body of work. Should I be trying to do more? Should I be focused on some specific research agenda? Should I worry about the public impact of my work?

There seem to be at least two reasons for thinking I should. First, in terms of research agenda, it seems that one way to get ahead in academia (i.e. to win research-funding, wider acclaim and promotion) is to be an expert on a narrow range of topics. The eclectic and haphazard approach of my previous work is out of kilter with this ideal. Being a jack of all trades but master of none is a surefire way to academic mediocrity. Second, pursuing intellectual interests for their own sake, can be said to be both irresponsible and selfish. You ought to think about the public impact of your work (if only to save your job in the wake of the recent ‘impact’-fetishism in higher education). You ought to improve the world through what you do. Or so I have been told.

I have some problems with these claims. I don’t enjoy thinking about my work in purely instrumentalist terms. I am not convinced that eclecticism is such a bad thing, or that one should pursue ideological consistency as an end in itself. And while I would certainly like to make the world a better place, I would worry about my lack of competence in this pursuit. Ideas can make the world a much worse place too, as even a cursory glance at history reveals. That said, I do often feel the call of public spiritedness and grubby instrumentalist careerism.

Which brings me back to Thaler’s book….not that he’s a grubby careerist or anything (I don’t know the guy). It’s just that the book, perhaps inadvertently, presents a particular model of an academic career that I found interesting. It’s not the explicit focus of the narrative, but if you zoom out from what he is saying, you see that there are three main stages to his academic career. They weren’t pursued in a strict chronological fashion — there was some overlap and back-and-forth between them — but they are distinguishable nonetheless. And when you isolate them you see how it is possible to build a career from a foundational set of intellectual interests into something with greater public impact.

The three stages were:

Stage I - Pursuing one's Intellectual Curiosities: It would be difficult to be a (research-active) academic without having some modicum of intellectual curiosity. There must be something that piques your interest, that you would like to be able to understand better, or evaluate in more depth. Without a foundation in intellectual curiosity, it would be difficult to sustain the enthusiasm and hard work required to succeed. I choose to believe that anyway, and it certainly seems to be the case for Thaler. As an economics student, he was taught the standard rational utility maximising theory of human behaviour. But then he spotted all these examples of humans behaving in ways that contradicted this theory. He describes all this in Chapter 3 of the book where he talks about the ‘List’. This was something he compiled early in his career, listing of all the anomalies that were starting to bother him. A large part of his research was taken up with trying to confirm and explain these anomalies. And the curiosity didn’t stop with this early list either. Later in the book he gives some illustrations of how his curiosity was always being piqued by seemingly mundane phenomena, such as the formula the University of Chicago business school used for allocating offices in its new building, or the behaviour of contestants on popular game shows. I like to think this sort of ‘curiosity for the mundane’ is valuable, partly because I think curiosity is an end in itself and partly because mundane or trivial phenomena often provide insights into more serious phenomena. Either way, curiosity was the bedrock to Thaler’s career.


Stage II - Influencing one's Academic Peers: In academia there are few enough objective standards of success (outside of mathematics and the hard sciences anyway and even there influencing one’s peers is important). The only true measure of the academic value of one’s research is its acceptance by and influence on one’s academic peers. To some extent, the mere publication of one’s original research in well-respected journals is a way to do achieve this influence, but it is often not enough. After all, very few people read such articles. You often need to take more a more concerted approach. We see evidence of this in Thaler’s life too. His behavioural research presented a challenge to the received wisdom in his field. If he was going to get ahead and have any impact on the world of ideas, he needed to engage his peers: convince them that there was indeed something wrong with the traditional theory and influence future debates about economic theory. Part V of his book is dedicated to how he did this. Three examples stuck out for me. The first was relatively obvious. It concerned a conference he participated in in 1985. The conference was a face off between the traditional economic theorists and the more radical behaviourists. This conference format forced engagement with more sceptical peers. The second was a regular column he managed to secure in a leading economic journal (Journal of Economic Perspectives). The column was entitled ‘Anomalies’ and in it he presented examples of anomalies challenging the mainstream theory. The articles were intended for the economics profession as a whole, not just for research specialists, and most often involved findings from other researchers (i.e. not just from Thaler himself). The column gave him a regular platform from which he could present his views. And third, there was the summer school for graduate students that he helped to create back in 1992. This provided intensive training for future academic economists in the theories and methods of the behaviouralist school. This helped to ensure a lasting influence for his ideas. Building such outlets for academic influence looks like a wise thing to do.


Stage III - Pursuing Broader Societal Impact: The term ‘academic’ is sometimes used in a pejorative sense. People refers to debates as being ‘strictly academic’ when they mean to say ‘of little relevance or importance’. Academics often struggle with this negative view of their work. Some embrace it and defend to the hilt the view that their research need have no broader societal impact; others try to use their work to change public policy and practice. This is something Thaler eventually tried to do with his work (once the solid foundation in basic research had been established). There are several examples of this dotted throughout the book. The most important is probably the book he wrote with his colleague Cass Sunstein called Nudge. This book tried to show how behavioural research could be used to improve outcomes in a number of areas, from tax collection to retirement saving to bathroom hygiene. The book was published with a popular press and found its way into the hands of current British Prime Minister David Cameron (at the time he was leader of the opposition). Impressed by the book, Cameron established the Behavioural Insights Team to help improve the administration of the British government. Thaler was also involved in setting up and advising this team and he still works with them to this day. Now, I’m sure you could challenge some of the work they have done, but what’s interesting to me here is how Thaler managed to successfully leverage his research work into real-world impact.

Just to be clear, I’m not suggesting that all successful academic careers will have these three stages, or that, if they do, they will look just as they did in Thaler’s case. All I’m suggesting is that there is a useful model in these three stages, one that I might think about using for my own career. Thus, I want to make sure that I always maintain a firm foundation in intellectual curiosity, and use that to generate a valuable set of insights/arguments. That’s effectively what I have spent most of my time doing so far and I will continue to do it for as long as I can. But I don’t want to just leave it at that. From this foundation I want to think about ways in which to influence both my academic peers and the broader society. I don’t think my work lends itself to the same kind of practical impact as does Thaler’s, but I think that’s okay. Societal impact can be generated in other ways, e.g. through public education and inspiration, and I suspect that might be more my thing.
Posted by John Danaher at 9:41 PM