But is it cheating? Some thoughts on robots and sexual infidelity 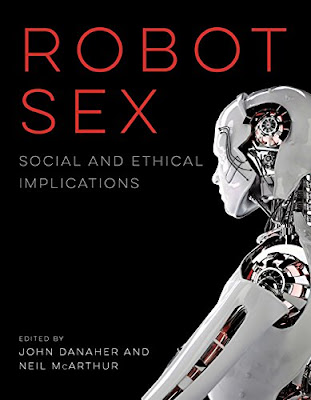 [This is short article that I wrote in collaboration with Neil McArthur, for promotional reasons, when the Robot Sex book (pictured above) was coming out. Since it is unlikely to be published now, I thought I would share it here. It's not the most rigorous piece I've ever written, but I think the core insight is worthwhile.]

The comedian Richard Herring recently created a series of sketches centred around the question ‘is it cheating if you have sex with a robot?’ As someone who has been researching the topic of sexual relationships with robots for several years, I am dismayed to find that this is the most common question I get asked. The advent of sophisticated sex robots raises a number of important ethical questions for society, but the cheating question does not seem to be among them.

But since others think it is important it probably behooves me to provide an answer. Here’s my best shot.

First, I presume that people have something like the following in mind when they ask the question:

“Given that I am in a serious and committed relationship with another human being, if I have sex with a robot, does this count as cheating on my human partner?”


To answer that, you need to think about what it means to ‘cheat’. There are at least two distinct meanings of the word in common parlance. The first, which is specific to intimate relationships, is that cheating occurs when one person engages in sexual contact with someone other than their ‘official’ intimate partner. The second, which applies more generally, is that cheating occurs when you break the rules of a given practice to gain an advantage. To avoid confusion, we can refer to the first as ‘cheating*’ and the second as simply ‘cheating’.

When people ask the cheating-question, they usually focus on cheating*, but I argue that this is a mistake. They really should focus on cheating. Why? Well, for one thing, cheating* is not an issue in some relationships. Some people have ‘arrangements’ that open the doors to intimate sexual contact with third parties. They have established internal ground rules for their relationships that say that this is permissible, under certain circumstances. They care about breaking those rules, not about infidelity per se.

Furthermore, the focus on cheating* forces us into endless debates about which forms of intimate contact count as cheating*. Do you cheat* if you kiss someone else? What about if you send them explicit text messages? This encourages people to take an overly technical and legalistic approach to their relationships — to hope that they can avoid their partner’s ire or disappointment by falling outside the technical definition of cheating*. They consequently overlook or ignore what’s really bothering their partner about their conduct: the sense of betrayal or emotional harm. They care about cheating* when they should care about cheating.

If we accept this shift in focus, the cheating-question becomes relatively easy to resolve. It’s simply a question of whether the internal rules of the relationship forbid the use of sex robots. That’s something that the parties to the relationship should determine for themselves, through negotiation and agreement. In a liberal society, this seems like the right approach: intimate partners should be able to determine the rules of engagement for their own relationships without being dictated to by societal norms (provided that their own rules don’t breach other legitimate laws).

But, of course, it’s not that simple. Most people don’t set down explicit rules of engagement for their relationships -- even though they probably should. It could save a lot of heartache and upset if they did. Instead, they figure things out as they go along and rely on general social conventions to fill the gaps in any rules they may have agreed. This is not an unusual practice. In education, for example, official assessments are often governed by explicit rules that determine what counts as cheating, but those rules don’t cover every possible form of cheating or address novel technologies that enable new forms of cheating. Assessors rely on background norms of fair play to fill in the gaps. These background norms form the basis for ‘default rules’ that apply until they are overridden (or confirmed) by explicitly articulated rules.

This means that even if we do focus on cheating rather than cheating* we cannot completely avoid the technical questions as to whether having sex with a robot counts as cheating. We have to also consider whether society’s default rules forbid the use of sexbots in relationships. This is tricky since it is a novel and emerging technology and we don’t have agreed upon societal expectations in relation to them. We only have analogies. At the moment, the default rule in most Western societies seems to favour monogamy. Things may be changing in this respect, of course, and certain pockets of society may have clearly adopted non-monogamous default rules, but within the 'pockets' that I frequent I don't see anything happening to shift the presumption in favour of monogamy. This default rule holds that having intimate contact with a person other than your ‘official’ partner is a form of cheating. If you are entering into a relationship within someone, you would need to explicitly agree to deviate from this default rule. But what about other tricky cases that threaten the default rules. For example, what are society’s default rules in relation to the use of masturbatory sex toys and pornography? Things seem much fuzzier here. Historically, I suspect that the use of both would have counted as a form of intimate betrayal (i.e. cheating). Nowadays, I am not so sure. People now often take it as a given that their partners will watch pornography or use sex toys without their explicit consent.

Using these two examples as a guide suggests that whether a couple needs an explicit override or not with respect to sexbots depends on whether they think they sexbot is more like a person or like a sex toy. For the foreseeable future, sexbots will not be persons, but they will look and act in person-like ways. And because they look and act like persons, it’s unlikely that sexbots will be viewed simply as another sex toy. They will lie in a zone of uncertainty. That means, for the foreseeable future, if you plan on using a sex robot whilst in a committed relationship, you should probably explicitly negotiate for this with your partner. That’s the only way to be sure you are not cheating. But in the long-term, as sex robots proliferate, their use may be normalised, and so not something that needs to be explicitly negotiated.