Procreative Beneficence and the Non-Identity Problem 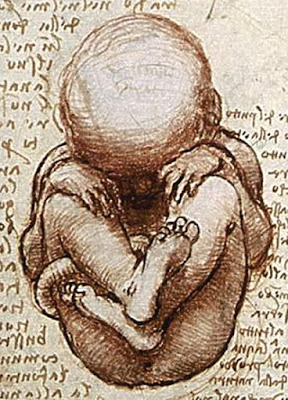 One critic is Rebecca Bennett. She argues against the PPB by using Derek Parfit’s famous ‘non-identity problem’ (NIP). Savulescu’s argument suggests that there is an obligation to procreate in the best possible way, which in turn implies that it is wrong to not comply with this obligation. But how exactly can it be wrong? According to the NIP, it is normally the case that in order for an action to be wrong there must be an actual subject who is harmed by that action. In the case of procreative choices, there is no subject that is harmed by the choice: the child who is the object of the choice has not yet come into existence and so cannot be harmed by the choice. This leads Bennett to the view that procreative choices are not moral choices at all. They are ‘mere preferences’.

Ben Saunders has pushed back against Bennett’s view. He makes three main arguments: (i) that Bennett partly misconstrues the NIP by overlooking other ways in which it can be solved; (ii) that there can, in fact, be cases of harmless wrongdoing; and (iii) even if procreative choices are not, strictly-speaking ‘moral’ in nature, they may nevertheless not be ‘mere’ preferences.

In what follows, I want to consider all three of Saunders’s arguments. This will give me an excuse to describe the NIP at some length, which is something that I have surprisingly failed to do in the past eight years of this blog.


1. Understanding the Non-Identity Problem
The NIP was originally formulated as a problem in the field of population ethics. It works like this: intuitively, it seems like we have some moral obligations to future generations. When I think about my own conduct, I certainly have a strong sense that I should not despoil the planet for my own benefit if this comes at the expense of the well-being of future generations. But there is a problem with this intuition: it clashes with another widely held belief about the preconditions of wrongdoing. According to the ‘person-affecting view’, an action is only wrong if it actually harms someone. Future generations do not yet exist — indeed, their existence is dependent on what I and others of my generation do — so they cannot be harmed by anything I do today. It seems to follow from this that I have no obligations to future generations.

From this description, it should be clear that the NIP is not an argument for a particular point of view. It is, rather, a contradiction/puzzle about our commonly-held moral beliefs. Furthermore, although the NIP is firmly grounded in population ethics, it can be formulated in more generic and abstract terms. This is the characterisation that Saunders favours in his article. He argues that the NIP arises from an inconsistent triad of propositions. The triad is as follows:


(If you need this to be cashed out in more concrete terms, then simply replace ‘risky policy (X)’ in the above formulation with ‘the decision to have a child’ and you see how it applies to Savulescu’s PPB.)
The NIP arises because you cannot simultaneously accept all three of these propositions. You can, at most, simultaneously accept two of them and reject the third. You need to figure out which one has to go. That’s how you solve the NIP. Are you going to stick with (1) and (2) and reject (3)? Or accept (2) and (3) and reject (1)? Or even accept (1) and (3) and reject (2)? In the diagram below, I illustrate how this inconsistent triad works, showing the various combinations of views that it is possible to accept. 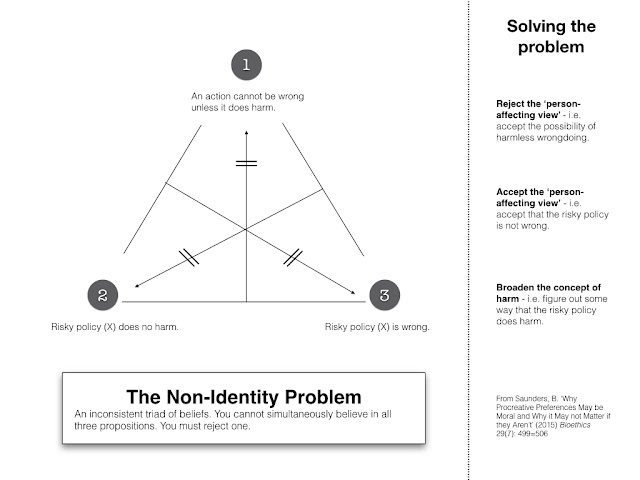 Bennett, in her critique of the PPB, favours one particular solution to the NIP. She accepts (1) and (2) and rejects (3). In doing so, she is in good company since the NIP is often interpreted in those terms. Indeed, Parfit himself seemed to favour this interpretation, arguing that those who wished to reject this interpretation were obliged to come up with some theory to explain how you could have harmless wrongdoing. As such, Bennett sees the NIP as a ‘burden of proof’-shifter.

But it’s not entirely clear that this is a fair interpretation of the NIP, and it is important to remember that you can resolve the problem in other ways than rejecting the belief that the risky policy is wrong. That’s Saunders’s first key argument.


2. The Possibility of Harmless Wrongdoing
Saunders then goes on to consider various interpretations of ‘harm’ that might allow for the possibility that procreative choices cause harm. As Saunders points out, a broad enough interpretation of what counts as harm (e.g. harm to self) would encompass procreative choices, but some people might reject this as being an insufficiently moralised interpretation of harm. An alternative solution is to adopt an impersonal account of harm, according to which there does not need to be a subject of harm.

I’ll skip over these aspects of Saunders’s article to focus on what I take to be the more important argument, namely: that harmless wrongdoings are a genuine possibility. If he’s right, we would have reason to reject (1). He defends this possibility with a series of thought experiments. I’ll list them all here since they are relatively short and they help to make the point:

Drunk-driving: “Someone drives along the public highway after excessive alcohol consumption, thereby endangering road-users. Fortunately they do no hit anyone.”


Trespass: “Someone breaks into your house and takes a nap in your bed. They do not damage anything and you do not find out.”


Deathbed Promise: “You promise your dying mother that you will perform an easy task that is of great importance to her, but you do not do so.”


Scrooge: “A wealthy individual gives nothing to charity, though they could benefit the needy at no real cost to themselves.”


Saunders argues that each of these actions is wrong, but they are not harmful — at least not obviously so. Some people might argue that some of the actions are wrong because they create a risk of harm (e.g. drunk-driving) and so you can ultimately explain their wrongness by reference to harm, but this does not account for all the examples and, in any event, it would not explain the wrongness of all instances of drunk-driving. Furthermore, there is a danger that in responding to these cases people try to gerrymander the concept of harm so that it can explain all instances of alleged wrongdoing, due to some prior theoretical commitment to the person-affecting view. But this would be to ‘put the cart before the horse’ (Saunders 2015, 504) and simply assume that harmfulness always explains wrongfulness. Saunders thinks it is better to stick with the pre-theoretical judgment that these cases involve wrongs, but that these wrongs are not dependent on harm.


3. Non-moral Categorical Preferences?
Saunders final argument concerns the possibility of non-moral categorical preferences. This is not a direct response to the NIP, but it can be used to call into question one of the alleged implications of the NIP. Recall, that Bennett thinks that because procreative choices do not involve wrongs they cannot be moral in nature. They are, consequently, ‘mere’ preferences. This carries the implication that there can be no meaningful evaluations or criticisms of people for acting on those preferences. Saunders argues that this conclusion is too hasty. It does not follow from the conclusion that procreative choices are non-moral that they are also ‘mere’ preferences.

The question is whether there are any preferences that are non-moral but still categorical. Saunders thinks that there are. For example, he thinks that certain aesthetic preferences can make claims to universality. If I say that ‘Mozart is a better composer than Salieri’, I am not just stating a mere preference for the former over the latter. I’m saying that there is something about Mozart’s musical compositions that means everyone in their right mind should see them as being superior to Salieri’s. The set of categorical preferences is broader than the set of moral preferences and is distinct from the set of mere preferences. 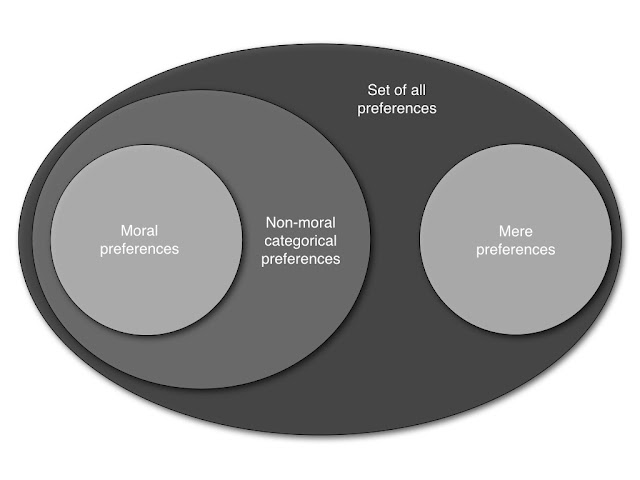 This is important because categorical preferences ‘purport to describe truths about what we have reason to value’ (2015, 505) and we are rightly ‘socially invested’ in their content. This has significance for the debate about procreative beneficence because it may be the case that procreative preferences are non-moral, but still categorical in nature. Someone who chooses to procreate a severely disabled child in preference to a child that is free from severe disability might not be doing anything morally wrong, but they might be contravening a categorical preference that we should all favour. Of course, putting it like this makes plain the controversial implications of the PPB, even if it is interpreted as a non-moral categorical preference.

This brings us to the end of this post. Nothing that has been said in this post should be taken as an endorsement of the PPB. That principle has many other hurdles to clear and I am not personally invested in defending it. But what has been said does suggest that one particular style of criticism, grounded in the NIP, has less bite than might first appear to be the case.