The Moral Duty to Explore Space (2): Criticisms and Replies 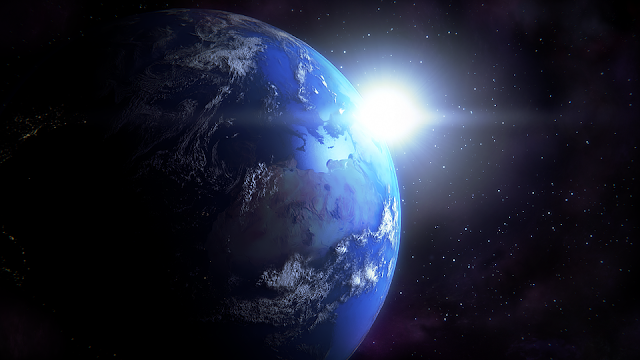 In this post, we are going to consider some objections to this positive case. These objections settle into three main families:


Practical Objections: These objections take issue with the feasibility of space exploration and hence with the alleged duty to explore space.


Environmental Objections: These objections take issue with the environmental costs/consequences of space exploration.


Attitudinal Objections: These objections take issue with the attitude inherent in the belief that we have a duty to explore space (Schwartz also refers to these as ‘non-practical’ environmental objections).

There are two members of each of these three families, giving us six objections in total. This is illustrated in the diagram below. We will consider all six in what follows. 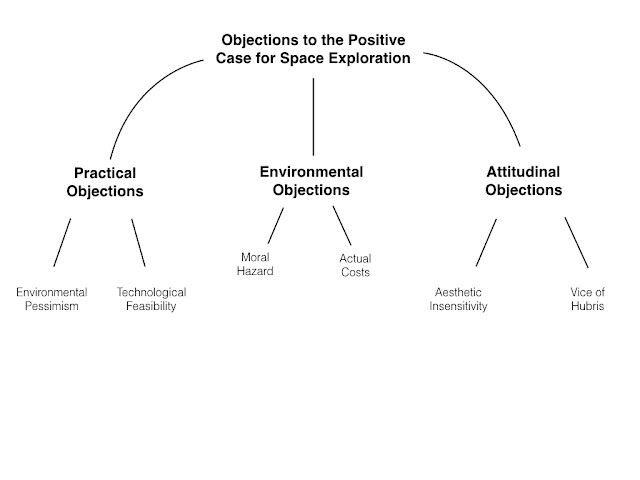 1. Practical Objections
There is an old Kantian claim that ‘ought implies can’. In other words, that you cannot be obliged to do something that it is impossible to do. This is potentially a major objection to any positive case for a duty to explore space — so much so that it was briefly discussed at the end of part one. If it turns out that space exploration is not practically achievable, then it is hard to see how we could be obliged to pursue it. But how exactly might it not be achievable?

One possibility is that it is not achievable due to environmental pessimism. In other words, we are doing such damage to our planet right now that it is unlikely that we will survive long enough to build the technologies we need in order to explore space. Schwartz is, consequently, trafficking in false hope.

But Schwartz thinks there is an obvious response to this concern. If you go back to the arguments in part one, you’ll see that most of them are premised on different forms of environmental pessimism. The general idea behind them all is that if we hang around on Earth we will destroy our environment (or be destroyed by it) and so we won’t be able to survive in the long-term. This means that we have much more to fear from sticking around than we do from expanding into the solar system. To put it another way, space exploration seems like a good way to mitigate environmental pessimism, not something that will necessarily be hampered by it.

Another way in which to run the practical objection is to focus on technological impossibility. This is a more formidable version of the objection since certain forms of space exploration certainly depend on highly speculative and imaginary forms of technology. But other forms are possible with today’s technology and with plausible extrapolations from those technologies. So, for example, asteroid mining in order to access scarce resources, or manned solar system exploration would seem to be within our grasp. Interstellar exploration might be a different story, but it is not completely beyond the bounds of possibility (e.g. through increased cyborgisation) and we have a lot of time left to run out on the clock before it becomes necessary.


2. Environmental Objections
Building spacecraft and launching them into space is, undoubtedly, a costly endeavour. It requires a huge investment of time and energy. And building the new technologies that will enable us to explore the furthest reaches of space will require even greater investments of time and energy. These investments are costly and, to the extent that they are premise on building our capacity to avoid environmental collapse, we might question their wisdom. Perhaps there are other things we should be investing in that are less costly? Again, Schwartz looks at two different ways of running this objection.

The first focuses on the moral hazard involved in space exploration. I’ll leave Schwartz to explain the idea:

If humanity realizes that there are ample resources available in the wider solar system, we may decide to deplete the resources of the planet at a significantly increased clip. This possibility comes as a consequence of our being insulated from the risks associated with the reckless consumption of Earth’s limited resources.


‘Moral hazard’ is a concept that is drawn from economics. The idea is that in certain circumstances insuring a person against a risk creates an incentive to be reckless with respect to that risk. So, for example, guaranteeing someone a bailout in the event that they are unable to pay back their loans might be thought to give them an incentive to do things that prevent them from being able to pay back the loans. Applied to the present context, people might view feasible space exploration as an insurance against the risk of environmental depletion here on Earth and so be more willing to engage in that environmental depletion. So it’s better not to invest in space exploration so that people are not encouraged to wreck the environment.

Is this objection persuasive? Well, here’s an analogy that suggests it is not. Imagine you are very wealthy and own a yacht. You like to invite people to party on your yacht. Someone warns you that having lots of parties increases the risk of fire on your yacht. Consequently, they advise you to invest in lots of lifeboats. But you argue, in response, that having the lifeboats will just encourage your guests to be more reckless with respect to the risk of starting a fire because they will then know they can escape if things start to heat up. So you decide not to invest in any lifeboats. Are you right not to do so? Schwartz says ‘no’. One reason why it’s not is because fires can start for reasons that are beyond anyone’s control: no matter how cautious and safe they are, there is always the chance of a fire starting. It would be silly not to have any lifeboats to insure you against the risk of dying in the fire. But then that’s exactly equivalent to what a proponent of the moral hazard argument is claiming in the present context. Even though the environmental risks to Earth are not all within our control (e.g. solar burnout; meteorite impact) we should not build any lifeboats to the stars. Surely that’s not right?

A second version of the objection just focuses on the actual environmental and economic costs of space exploration and argues that the money invested could go towards conserving and protecting the environment. Schwartz’s response to that is to argue that people tend to vastly overstate the true environmental and economic costs of space exploration. He gives some figures in his article. To give a couple of examples, NASA’s plan to send astronauts to Mars was expected to contribute 0.0012 % to global ozone depletion and 0.004% to US carbon emissions. Furthermore, NASA’s entire budget represents around 0.5% of the total US Federal Budget. The reality is that other industrial and economic activities are far more costly. On top of this, transferring economic activity to space (e.g. industrial processing in space; asteroid mining) could actually reduce the environmental cost to the Earth. So the long-term benefits of space exploration for the environment are worth factoring in.


3. Attitudinal Objections
The final set of objections are the most philosophical in nature. They are concerned with the attitude inherent in the desire to explore space. The clearest exponent of these objections is probably Robert Sparrow, who has made them specifically in relation to the idea of terraforming other planets. He views this as a potential form of cosmic vandalism, and hence something to be lamented and avoided if possible. Schwartz looks at two variations of Sparrow’s objection.

The first variation focuses on the aesthetic insensitivity implicit in the desire to explore and exploit the space environment. The starting premise of this objection is that we all ought to have an appropriate appreciation and reverence for that which is beautiful. This includes human artistic creations and also aspects of the natural environment. Someone who did not appreciate natural beauty could be rightly criticised for not having the right aesthetic sensitivity. To underscore this point, Sparrow asks us to imagine a hiker who is out walking one day and sees a beautiful arrangement of icicles on the cutting point of creek. The hiker knows that the icicles will melt by tomorrow but, in a way, this fragility makes their arrangement all the more beautiful. Now, imagine, that the hiker decides to kick-in the icicles. How should we judge their actions? Sparrow thinks that there is something wrong about the decision to kick-in the icicles; it does not display the right kind of aesthetic sensitivity. By analogy, the space explorer who wishes to exploit other planets or asteroids lacks aesthetic sensitivity.

Schwartz argues that while there is something to Sparrow’s objection, it is not obvious or straightforward in its application to space exploration. One initial problem, which plagues all aesthetic discussions, is that beauty can be very much in the eye of the beholder. What one person finds beautiful and worth preserving, another person can find ugly and worthy of destruction. There is a risk of triviality and impracticality if you assume an overly subjectivised understanding of beauty. In any event, assuming we do agree that certain aspects of the space environment are beautiful and worth conserving in their natural form, this does not tell against the general project of space exploration. Schwartz’s argues that we could have conservation zones and ‘national’ parks in space that allow people to appreciate the beauty of the space environment. Furthermore, he argues that it is plausible to suppose that we might have a ‘duty’ to appreciate things that are aesthetically beautiful and so travelling to space to see the wonders of nature might be one way of discharging that duty. In other words, the space explorer can exhibit plenty of aesthetic sensitivity.

The other way to run Sparrow’s objection is to focus on the hubris involved in the decision to explore space. The idea here is that humans have a ‘proper place’ and that proper place is here on Earth. We are adapted to live on Earth. We can flourish here without too much difficulty. We are not adapted to life in space or on other planets. It is the height of arrogance and hubris to assume that we can, or that we should:

A proper place is one in which we can flourish without too much of a struggle. It is a place in which one fits and does not appear uncomfortable or out of place…If we have to wear space suits to visit and completely remodel it in order to say, then it’s simply not our place.


The problem with this argument is that it would put paid to many forms of human exploration. After all, there are many environments on Earth in which it is a daily struggle to survive, and yet we have explored and settled them nonetheless (e.g. Arctic environments). Furthermore, much of what makes Earth so liveable for us right now is as a result of significant technological and industrial design. The convenience of modern life (cheap food, electricity, running water, sanitation, antibiotics, central heating etc) are, arguably, the products of hubris. We wouldn’t have got to where we are today without embracing it.

This does not mean that we should pursue a policy of space exploration with reckless abandon. We should be cautious and reflective, and try to avoid the environmental errors of past instances of industrial expansion. But to suggest that we should simply stay put because Earth is our ‘proper place’ seems wrong.