The Ethics of Virtual Rape 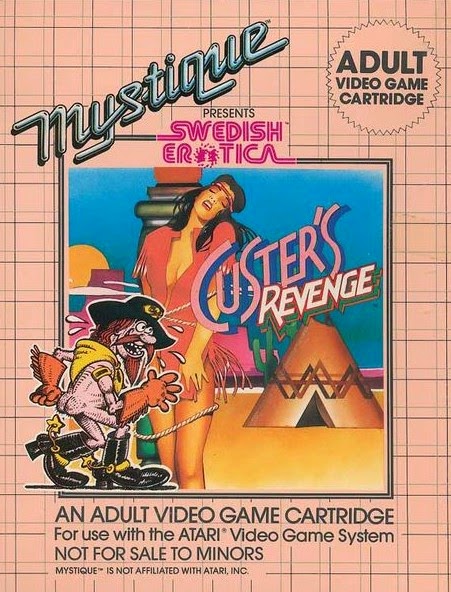 The notorious 1982 video game Custer’s Revenge requires the player to direct their crudely pixellated character (General Custer) to avoid attacks so that he can rape a Native American woman who is tied to a stake. The game, unsurprisingly, generated a great deal of controversy and criticism at the time of its release. Since then, video games with similarly problematic content, but far more realistic imagery, have been released. For example, in 2006 the Japanese company Illusion released the game RapeLay, in which the player stalks and rapes a mother and her two daughters.

The question I want to explore in this post is the morality of such representations. One could, of course, argue that they are extrinsically wrong, i.e. that they give rise to behaviour that is morally problematic and so should limited or prohibited for that reason. This is like the typical “violent video games cause real violence”-claim, and I suspect it would be equally hard to prove in practice. The more interesting question is whether there is something intrinsically wrong with playing (and perhaps enjoying) such video games. Prima facie, the answer would seem to be “no”, since no one is actually harmed or wronged in the virtual act. But maybe there is more to it than this?

In what follows, I’m going to try my best to outline and engage with her main arguments. I will base my discussion primarily on her 2010 article “The Incorrigible Social Meaning of Video Game Imagery”, though I have also read two of her other articles.


1. The Virtual Theoretical Approach and the Challenge of Video Games
You might be inclined to think that your aesthetic enjoyment of something (e.g. video games, movies, books, jokes) is an intrinsically amoral thing. To the extent that each of those representations involves fictional entities and events (and for the purposes of this discussion we are assuming that they only involve such entities and events), they don’t seem to have any intrinsic moral relevance. No agent is harmed, no wrong is done, it’s all just a matter of subjective enjoyment.

The reality of these aesthetic reactions suggests that the fictional world isn’t entirely beyold the moral realm. In particular, it suggests that a virtue ethicist can easily make an argument against games like Custer’s Revenge and RapeLay. For the virtue ethicist, what matters when it comes to morality is the cultivation of positive character traits (the “virtues”). A person who enjoys fictional representations of the sort described is expressing something negative about their characters. Consequently, there is something unvirtuous (“vicious”) about that individual. They are rightly the subject of moral criticism.

In very broad terms, the virtue theoretical approach looks like the best one to take when it comes to arguing that there is something intrinsically morally wrong with enjoying certain fictional representations. Nevertheless, there are two challenges to this position that must be overcome.

The first challenge forces us to confront the fictional nature of the representations. Imagine the following case:

Colosseum Spectator: Suppose you and friend are spectators at the Colosseum in ancient Rome. You watch all the events, but the only one that really excites your friend, and elicits laughter and other expressions of joy from him, is when the Christians are fed to the lions. What should you think of him?


That he’s a bad guy, right? That there is something morally vicious about his character. That seems straightforward enough, but that’s probably because there is real human suffering underlying his aesthetic enjoyment. He would have to be morally corrupt to enjoy that kind of thing. But what if it was a video game in which he fed Christians to the lions? And what if you have no other reason to suspect that your friend is morally corrupt? Outside of this one video game he does not seem to derive any enjoyment from human suffering. So is enjoying a purely fictional representation of such suffering enough to say something bad about his character?

This brings us to the second challenge. It’s not that all fictional representations of immoral conduct raise questions about the moral character of those who enjoy them, but rather that a particular subset do, specifically the subset involving things like Custer’s Revenge, RapeLay, and maybe virtual paedophilia, virtual genocide and so forth. This challenge is something I covered previously when I looked at Morgan Luck’s “Gamer’s Dilemma” (which asked: why is virtual murder acceptable but virtual paedophilia is not?).

Any satisfactory defence of virtue theoretical approach to fictional representations will need to address these two challenges. Partridge thinks she is up to this task. Let’s see why.

We can state this in slightly more formal terms:


This formalisation is messy; I’m sure it could be cleaned up. Nevertheless, it will suffice for present purposes. What we need to do now is go through some of the key premises in more detail.

This degree of connection to the real world can give rise the phenomenon of incorrigible social meanings. Partridge gives the example of fictional representations of African-Americans eating watermelons. I have to confess that this rings no alarm bells for me (coming from an Irish background) but Partridge informs me that such representations have an incorrigible social meaning in the United States. The U.S. has a morally problematic history with slavery and racism, and images of African-Americans eating watermelons have apparently played a part in that history. Specifically, they have been used to insult and dehumanise.

Partridge’s point is that within the U.S. such representations have an incorrigible and morally problematic meaning. Anyone who is a member of that community should be aware of that meaning. Partridge also gives other examples of representations with such incorrigible social meanings. For instance, an image of simianised black person would have a racist meaning across most (probably all) cultures. Likewise, the representations in Custer’s Revenge and RapeLay have incorrigible social meanings, given the treatment of the Native American population in the U.S. and the systematic social oppression and sexual objectification of women. (This, incidentally, gives us a defence of premise (2) as well).

Let’s grant that such representations have morally problematic meanings. Is it really true that there is consequntly a limit on the range of reasonable interpretations? Partridge’s answer is a nuanced one. Sometimes such representations could have reasonable alternative meanings but, she argues, this will almost always be when they are explicitly used by people to draw attention to the moral problems they raise. For example, it may be possible for a black artist to use racist imagery in order to make an anti-racist statement. But that is a limited range of cases. In most instances, the morally problematic meanings will be the only reasonable ones.

Moving on then to premise (4). Is it really fair to say that someone who fails to heed the incorrigible social meaning deserves moral criticism? If our game-playing friend laughs off the crude depiction of rape in Custer’s Revenge and insists that it is only a game, are we still entitled to chastise him? Partridge wants to say “yes”, but in saying that she needs to be sensitive to the second challenge outlined above. Why is moral criticism deserved in relation to some kinds of immoral representation and not others?

Partridge admits that there is no definitive test. Nevertheless, she wants to argues that representations that play upon social prejudice and oppression are almost always going to be problematic. Anyone who fails to pay heed to their social meaning is likely to be worthy of moral criticism. Why? Because oppression stems from a denial of full respect to certain groups of people. It is something that one group (the elite) denies to another group. Hence, if the problem of oppression is to be corrected, it requires changes in social attitudes. This, coupled with the fact that the denial of respect to certain groups has frequently been facilitated by fictional representations, is what makes the failure to attend to the incorrigible social meaning of such representations worthy of criticism. To quote from Partridge herself:

This denial has been achieved partly through the kinds of imaginative entertaining that the games in question invite us to adopt. This is what makes the images cited here particularly incorrigible, so that a friend who responds to our criticism of Custer’s Revenge by claiming, ‘‘Come on, it’s only a game; I’m not sexist.’’ sees his imagining as just some random imagery detached from his own moral commitments, and detached from the moral facts on the ground. Such a failure is a failure both of sensitivity and of sympathy—sensitivity to the social meaning of the imagery, and sympathy with those who are the targets of such imagery.


A failure of sensitivity in this instance, given the need to correct social attitudes, is what warrants the moral criticism.

With this defence of premise (4) complete, the argument as whole seems moderately plausible.

First, it’s imporant to realise that Partridge’s arguments are relatively modest and her position quite complex. She is not claiming that enjoyment of all immoral fictional representations is worthy of approbation, nor is she claiming that it is easy to say when it is worthy of approbation. The creators of fictional worlds can insulate their fictional representations from social meanings. But this can be a tricky process. Partridge discusses, in particular, the example of Resident Evil 5, a game set in Africa in which the character, Chris, kills hordes of marauding African zombies. Some complained about the representation — a white character was, after all, being required to kill African zombies — but one could argue that within the context of that fictional universe, the representation made sense and was hence insulated from its racist social meaning.

Second, presumably because of its modesty and complexity, Partridge doesn’t really consider the social implications of her argument. To be precise, she doesn’t really consider the form that the moral criticism should take, or the regulatory impact on video games and other fictional media. Do we just need to gently admonish our friends and the creators of those representations? Encourage them to be more sensitive in the future? Or do we need a more intrusive, more punitive, social response? Those are questions I’d like to see answered.

A final point that’s worth mentioning is that Partridge’s argument also forces us to draw a distinction between certain kinds of response to fictional media. The person who thinks that games involving virtual rape are a “bit of a laugh” is different from the person who actively enjoys those kinds of representation, who seeks them out, and seems to derive some (sexual) pleasure from them. The former is demonstrating a lack of requisite moral sensitivity; the latter is demonstrating a deeply troubling moral character. This suggests an additional layer of complexity in the analysis. In order to make a proper assessment of moral character, we must pay attention not only to the meanings of the representations but also to the precise nature of the aesthetic response to those representations.

Okay, so that brings us to the end of this post. I should emphasise that this is a very brief overview of Partridge’s arguments. In her published work, she uses many more examples and elaborates her views in additional ways. To be honest, it’s not always easy going, but if you are interested in the topic, I’d suggest checking it out.
Posted by John Danaher at 1:22 PM