Will sex workers be replaced by robots? (A Precis)

I hate to say this myself, but I thought the arguments in the paper were interesting, and I’d like to hear what other people think about them. But since people are busy, and may not be inclined to read the full 8,000 words, I thought I would provide a brief precis of the main arguments here. That might persuade some to read the full thing, and others to offer their opinions. So that’s what I’m going to do. I’m going to focus solely on the arguments relating to the replacement of sex workers by robots, leaving the basic income arguments out.

This is the first time I’ve ever tried to summarise my own work on the blog — I usually focus on the work of others — and it comes with the caveat that there is much more detail and supporting evidence in the original article. I’m just giving the bare bones of the arguments here. No doubt everyone else whose work I’ve addressed on this blog wishes I added a similar caveat before all my other posts. In my defence, I hope that such a caveat is implied in all these other cases.


1. The Case for the Displacement Hypothesis
Those who think that prostitutes could one day be rendered technologically unemployed by sophisticated sexual robots are defenders of something I call the “displacement hypothesis”:

Displacement Hypothesis: Prostitutes will be displaced by sex robots, much as other human labourers (e.g. factory workers) have been displaced by technological analogues.

I argue that it depends on two related theses:

The Advantages Thesis: Sex robots will have advantages over human prostitutes that will make them more desirable/more readily available.


I then proceed to consider the arguments in favour of both.

When combined, I suggest that the transference thesis and the advantages thesis present a good case for the displacement hypothesis. An argument diagram summarising what I have said and clarifying the logical connections is provided below. 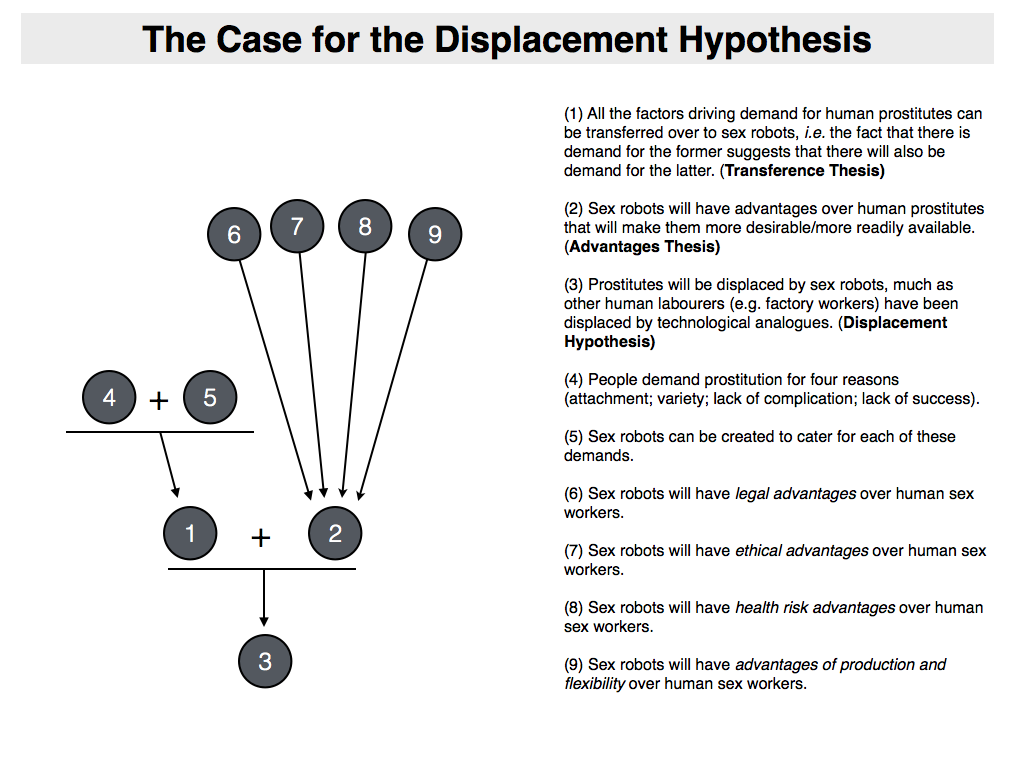 2. The Case for the Resiliency Hypothesis
Although I accept that there is a reasonable case for the displacement hypothesis, one of my primary goals in the article is to suggest that there is also a case to be made for the contrasting view. Thus, I introduce something I call the “resiliency hypothesis”:

Resiliency Hypothesis: Prostitution is likely to be resilient to technological unemployment, i.e. demand for and supply of human sexual labour is likely to remain competitive in the face of sex robots.


As with the displacement hypothesis, the case for the resiliency hypothesis rests on two theses:

The Increased Supply Thesis: Technological unemployment in other industries is likely to increase the supply of human prostitutes.


In retrospect, I possibly should have called the second of these, the “Increased Supply and Competitiveness Thesis” since the claim is not just that there will be an increased supply but that those drawn into sex work will do everything they can to remain competitive against sex robots (thereby countering some of the advantages robots have over humans). I think this is clear in how I defend the thesis in the article, just not in the name I gave it.

Anyway, I rested my defence of the human preference thesis on three arguments and bits of evidence. The first was largely an argument from philosophical intuition. I suggested that it seems plausible to suppose that we would prefer human sex partners to robotic ones. I based this on the belief that ontological history matters to us in matters both related and unrelated to sex. Thus, for example, we care about where food or fine art comes from: it’s more valuable if it has the ontological right history (not just because it looks or tastes better). We also seem to care about where our sexual partners come from: witness, for example, the reaction to transgendered persons, who are sometimes legally obliged to disclose their gender history. (I’m not saying that this reaction is a good thing, just that it is present).

Fortunately, there were two other arguments for the human preference thesis. One was based on some polling data suggesting that humans were not all that willing to have sex with a robot (though I did critique the poll as well). The other was based on the uncanny valley hypothesis. I reviewed some of the recent empirical literature suggesting that this is a real effect, and argued that it might not even be a valley.

The defence of the increased supply thesis rested an a simple argument (the numbering may look a bit weird here but remember that’s because everything I’ve said is going into an argument diagram at the end):


I looked at each of the premises of this argument in the paper, though I focused most attention on premise (19). In support of this, I considered evidence from economic studies of prostitution. I also followed this with some argumentation on the way in which human prostitutes could address the advantages of sex robots.

That gives us the following argument diagram. 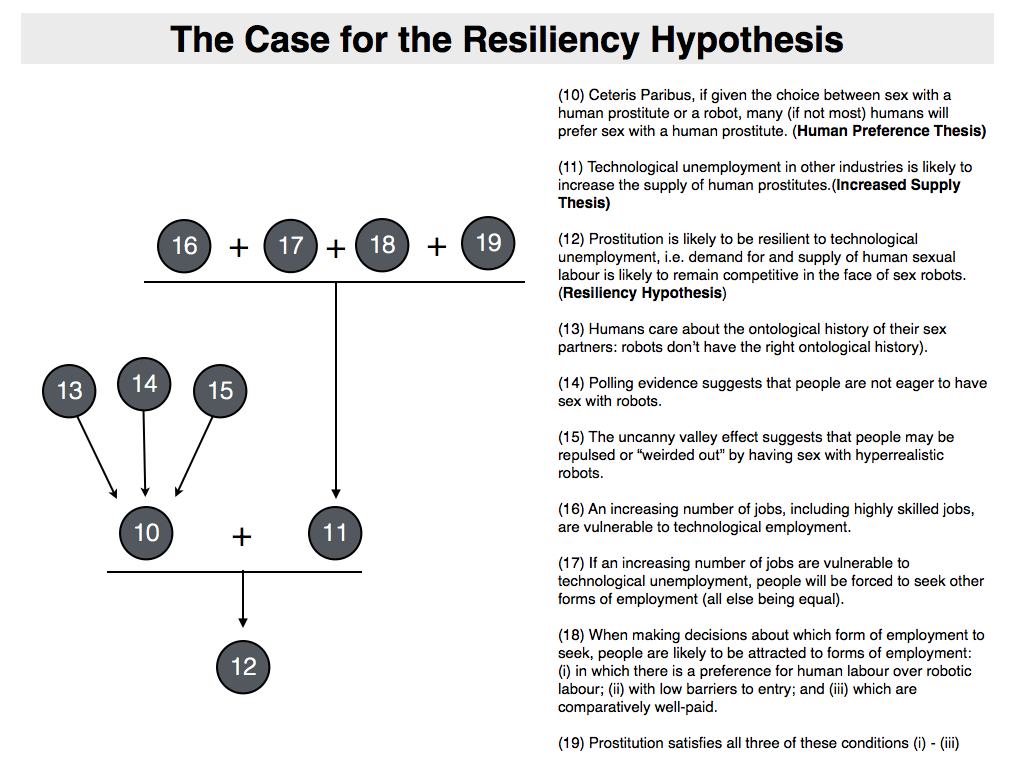 That’s it then. I hope this clarifies the case for the displacement and resiliency hypotheses. For more detail and supporting evidence please consult the original article. There is also some follow-up in the article about the implications of all this for the basic income guarantee.
Posted by John Danaher at 4:09 PM