Book Recommendation ♯14: Gratuitous Suffering and the Problem of Evil by Bryan Frances 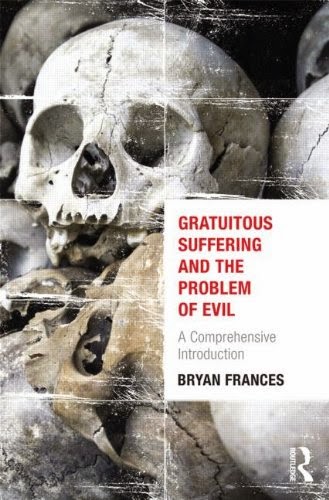 I’ve been out of the blogging loop for a couple of weeks now. This has been due to a number of commitments associated with the end of the university semester over here in the UK. With any luck, I’ll be able to get back into the swing of things next week. In the meantime, here’s a quick book recommendation: Bryan Frances Gratuitous Suffering and the Problem of Evil: A Comprehensive Introduction.

I’ve been reading this book on and off for the past few weeks, and I’ve hemmed and hawed about whether or not to recommend it. That in itself might suggest that it doesn’t deserve a recommendation, but since I’ve never claimed that the books I recommend here are without their flaws, I’ve decided to relent and give it a qualified thumbs up. As you might guess from the title, the book is an detailed treatment of the most famous of all atheological arguments: the evidential argument from evil. The treatment is introductory, as is suggested by the title, but very detailed. Indeed, so detailed is the discussion that it ends up reading like an introduction to the entire philosophy of religion.

In a way, that’s one of the great strengths of the book. What Frances manages to show — rather effectively in my opinion — is how the dialectical back-and-forth on one simple argument can grow legs and take-in a huge swathe of intellectual territory. The simple argument is the following:


Introducing this simple argument early on, Frances goes on to identify five theistic responses to it and dedicates a chapter each to their discussion. The five responses are:

The Confident Response: Argue that since you already know for certain that God exists, there must be something wrong with one of the premises of the argument, though you know not what. This typically involves the appeal to other arguments for God’s existence (Frances covers cosmological, design and social arguments), hence defending the confident approach often gets us into debates about other aspects of the philosophy of religion.

The Compatibilist Response: Deny the consequence premise by arguing that a creator God, who is all-knowing, all-powerful and all-good, could nevertheless permit gratuitous suffering to exist. This is probably the weakest response. Indeed, as far as anyone is aware, no theist actually denies the consequence premise in this manner. Nevertheless, Frances discusses it in the interests of completeness.

The Profoundly Hidden Outweighing Goods Response: Argue that God has his reasons for allowing seemingly gratuitous evil to exist. This amounts to a denial of the gratuitous premise. The proponent of this response will attempt to articulate a “theodicy”, i.e. an explanation for why God allows what He allows. This takes in things like the free will theodicy, the soul-making theodicy and so on.

The Skeptical Response: Similar to the above except that the argument is that we are so cognitively limited, when compared to God, that we should not expect to be able to see or understand His reasons for allowing seemingly gratuitous evil to exist. This response is quite popular nowadays, although the debate about it is becoming increasingly complex and arcane.

The non-4-part Response: Deny that God has one or more of the four properties stated in the consequence premise (i.e. not creator, not all-powerful, not all-knowing or not all-good).


Frances gives a very thorough airing to each of these responses, and although his sympathies are clear throughout (he thinks the problem of evil does pose a significant challenge to theism) he is pretty fair-minded and nuanced in his analysis.

My one major criticism of the book is that it is too much of an introductory text. Although the concepts and ideas discussed within its pages have obvious analogues in the debates going on in the pages of philosophical journals and monographs, Frances eschews the usual scholarly apparatus and does not refer to them. Instead of copious referencing and footnoting to the arguments of others, he tries to show the reader how to think through a complex problem themselves with a modicum of logic and good sense. This may be appealing to complete newbies, and the constant questions posed to the reader may encourage them to engage with the book in a way that I did not. The problem for me is that at this point in my life I need the scholarly apparatuses that Frances avoids; I need to know what other philosophers are thinking; I need to be able to engage with the debate as it is currently going on in the academy. That said, if you are new to the topic, or put-off by overly academic texts, this might just be the book for you.