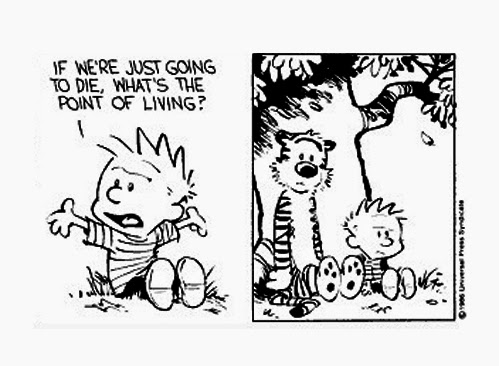 Albert Camus once said that suicide is the only truly serious philosophical question. Is life worth living or not? Should we fear our deaths or hasten them? Is life absurd or overflowing with meaning? These are questions to which I am repeatedly drawn. Consequently, I have written quite a few posts about them over the years. Below, you'll find a complete list, in reverse chronological order, along with links.


1. Understanding the Experience Machine Argument
Is there something inferior about a life lived in virtual reality? Robert Nozick's experience machine argument suggests that there is. This post tries to unpack his claims, following Ben Bramble's article on the same topic.

2. Is Game-Playing the Highest Ideal of Human Existence?
A look at Bernard Suits's claim that a utopian world would be a world of games.

3. Does Death Make Us the Lucky Ones? Existential Luck and the Consolations of Atheism
The text of a talk I delivered. It examines Richard Dawkins' 'Death makes us the lucky ones' argument at some length. Incorporates insights from some of the other posts listed below.

4. Technological Unemployment and the Meaning of Life
The text of a keynote speech I gave discussing the end of work and its impact on the meaning of life.


5. What is Utopia? The Meta-Utopian Argument
An examination of Robert Nozick's much-neglected argument for a meta-utopia. It's part of his classic book Anarchy, State and Utopia but frequently ignored in discussions of that book.

6. Who knows best? Personal Happiness and the Quest for a Good Life
Are we the best guides to our own happiness or should we defer to scientific experts?

7. Is Death the Sculptor of Life or an Evil to be Vanquished?
My examination/critique of an interesting paper by Davide Sisto which argues that death is essential to shaping our identities.

8. Should we be grateful for death?
A look at Mikel Burley's paper "Atheism and the Gift of Life". The paper argues that death might be a fitting end to human life.

9. Should we experience existential gratitude?
We're all alive. Should we be happy about this state of affairs? This post analyses Michael Lacewing's attempt to argue that atheists can be grateful for the fact of their existence:

10. Podcast - Does life have meaning in a world without work?
A podcast interview I did with Jon Perry and Ted Kupper from Review the Future. Looks at meaning in a postwork future:


11. Understanding Nihilism: What if nothing matters?
An examination of Guy Kahane's contribution to the debate about nihilism. Does pretty much what you might expect given the title:

12. The Philosophy of Games and the Postwork Utopia
If we no longer have to work for a living what will we do? How will we find meaning? This post looks at Bernard Suits's argument that the life of games is the best life of all:

14. God, Immortality and the Futility of Life
William Lane Craig argues that God guarantees meaning in life by ensuring that there is ultimate justice. Toby Betenson turns this argument on its head, claiming that if it is true it robs us all of meaning:

15. Human Life and the Quest for Immortality
Everlasting life has been a central goal for many human cultures. But would an immortal life be valuable? Samuel Scheffler argues that it wouldn't because much of what we take to be valuable about our lives is conditioned on the fact that we will not live forever. I take a look at what he has to say:

16. Longer Lives and the Alleged Tedium of Immortality
Bernard Williams famously argued that an immortal life would be tedious. In this post I look at Samuel Scheffler's critique of Williams. Although he thinks Williams gets it wrong in certain crucial respects, Scheffler nonetheless believes that Williams says something important about the human condition:

17. Meaning, Value and the Collective Afterlife
Does the fact that others will live on after we die contribute to the meaning of our lives? Samuel Scheffler argues that it does and this post examines his argument.

18. Dawkins and the 'We are Going to Die' Argument
In his book Unweaving the Rainbow, Richard Dawkins states that 'We are going to die and that makes us the lucky ones'. In this post, I analyse Dawkins's argument (note: my views on this have since changed; I now think there may be a way to render Dawkins's arguments more credible):

19. Is a longer life a happier life? Stoicism and Happiness
This post looks at the Stoic claim that "“a life, once happy, does not become any happier by lasting longer”:

20. The Achievementist view of Meaning in Life
An analysis of Steven Luper's "achievementist" account of meaning in life. Although I find the account intriguing, I'm not entirely convinced.


21. William Lane Craig and the "Nothing But" Argument
This post critiques William Lane Craig's argument that, because humans are nothing but collections of molecules, their lives are devoid of moral value. Although ostensibly framed as a contribution to the debate on morality and religion, the argument also has significance for those who are interested in the meaning of life.

22. Scientific Optimism, Techno-utopianism and the Meaning of Life
This post looks at an argument from Dan Weijers. The argument claims that if we combine naturalism with a degree of techno-utopianism we arrive a robust account of meaning in life. This contrasts quite dramatically with Craig's belief that naturalism entails the end of meaning.

23. Are we Cosmically Significant?
If you look up at the stars at night, it's easy to become overawed at the vastness of our universe. It is so mind-bogglingly large and we are so small. Does this fact make our lives less significant? Guy Kahane argues that it doesn't. This post analyses his argument.

24. Must we Pursue Good Causes to Have Meaningful Lives?
Philosopher Aaron Smuts defends the Good Cause Account (GCA) of meaning in life. According to this account, our lives are meaningful in virtue of and in proportion to the amount of objective good for which they are causally responsible. These two posts cover his defence of the GCA.

26. Should we Thanatise our Desires?
The ancient philosophy of Epicureanism has long fascinated me. Epicureans developed some interesting arguments about our fear of death and developed a general philosophy of life. One key element of this philosophy was that we should live in a way that is compatible with our eventual deaths. One way to do this was to thanatise our desires, i.e. render them immune to being thwarted or unfulfilled by death. This post asks whether this is sensible advice.

27. The Lucretian Symmetry Argument
Lucretius was a follower of Epicureanism. In one of the passages from his work De Rerum Natura, he defends something that has become known as the symmetry argument. This argument claims that death is not bad for us because it is like the period of non-existence before our births. In other words, it claims that pre-natal non-being is symmetrical to post-mortem non-being. Many philosophers dispute this claim of symmetry. In these two posts, I look at some recent papers on this famous argument.

28. Would Immortality be Desirable?
If we assume that death is bad, does it follow that immortality is desirable? Maybe not. Bernard Williams's famous paper - "The Makropulos Case: Reflections on the Tedium of Immortality" famously makes this case. In these three posts, I look at Aaron Smuts updated defence of this view. Smuts rejects Williams's argument, as well of the arguments of others, and introduces a novel argument against the desirability of immortality.


29. Is Death Bad or Just Less Good?
This is another series of posts about Epicureanism. In addition to the Lucretian symmetry argument, there was another famous Epicurean argument against the badness of death. That argument came from Epicurus himself and claimed that death was nothing to us because it was an experiential blank. In these four posts, I look at Aaron Smuts's defence of this Epicurean argument.

30. Theism and the Meaning of Life
The links between religion and the meaning of life are long-standing. For many religious believers, it is impossible to imagine a meaningful life in a Godless universe. One such believer is William Lane Craig. These two posts look at Gianluca Di Muzio's critique of Craig's view.

31. Harman on Benatar's Better Never to Have Been
Anti-natalism is arguably the most extreme position one can take on the value of life and death. Anti-natalists believe that coming into existence is a great harm, and consequently we have duty not to bring anyone into being. The most famous recent defence of anti-natalism is David Benatar's book Better Never to Have Been (Oxford: OUP, 2006). In these three posts, I look at Benatar's arguments and Elizabeth Harman's critiques thereof:

32. Podcasts on Meaning in Life
Back when I used to do podcasts, I did two episodes on meaning in life. One looking at a debate between Thomas Nagel and William Lane Craig on the absurdity of life. The other looking at the possibility of living a transcendent life without God.

33. Wielenberg on the Meaning of Life
This is a frustratingly incomplete series on Erik Wielenberg's arguments about the meaning of life. In my defence, it was my earliest foray into the topic, and I've covered many similar arguments since. One for the die-hards only I suspect: