Should Remorse Mitigate a Criminal Sentence? 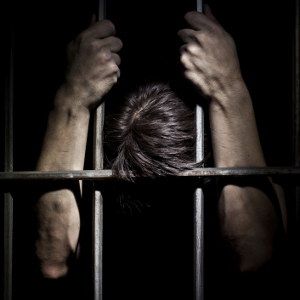 That we value remorse in this way is clear. Sentencing decisions at criminal trials are influenced by ‘mitigating factors’. These are factors — often specified by some legal instrument — that should reduce or lessen the sanction imposed upon a convicted criminal. Many jurisdictions explicitly identify remorse as a mitigating factor. And in some of those jurisdictions it plays a central role. For example, in a 2011 survey in England and Wales, remorse was found to be the most commonly invoked mitigating factor in six out of eight offence types. In other jurisdictions it has been found to make a difference between a life sentence and the death penalty.

All of which raises two questions: What exactly is remorse? And why should it influence decision-making in this way? This is something that the legal and bioethical scholar Hannah Maslen has thought about at length. In this post, I’m going to briefly sketch out the answers she gives to both question. I do so on the basis of an article she co-wrote with Jonathan Pugh entitled ‘Drugs that Make You Feel Bad’? Remorse-Based Mitigation and Neurointerventions’. The article is a fascinating exploration of the potential ways in which neurotechnologies could be used to induce remorse in criminal offenders. I might cover this aspect of the article on a later occasion. For now, I want to focus purely on what it says about the nature of remorse and the reasons for its invocation in criminal sentencing decisions.


1. A Three Part Account of Remorse
To explain what remorse is, we will work with an example. My partner really liked a flower plant that she bought. She put it on the windowsill in our room. I happened to hate it. While she was away I neglected to water the plant. The plant died. When she got back I told her how sorry I was: I had been very busy and totally forgot to water it. She accepted my apology. Secretly, I was glad the flowers were gone.

Since I told her I was sorry, I gave one of the common outward performances of remorse. But was I really remorseful? Hardly. Most people would agree there was something deficient about both my thoughts and my actions. But what exactly was missing? Maslen argues that there are three crucial elements to any true instance of remorse. These elements define, if you like, the necessary conditions for genuine remorse.

(b) ‘X affected another identifiable agent’


So to turn to the example of the unwatered flowers, I would have to believe that I failed to water them (that’s technically an omission rather than an action) and that my failure to water them had an effect on my partner. Now, given the way in which I described it, it’s probable that I did have these two beliefs. But I wasn’t truly remorseful, so they cannot be what marks the difference between genuine and non-genuine remorse.


Do these apply in the unwatered flower case? Maybe. I might really believe that failing to water the plants is wrong and that it deeply upset my partner. I might also believe that I deserve to be reprimanded for it. But I suspect this is unlikely. I suspect I didn’t really believe that what I did was wrong. I might have thought that she thought it was wrong — hence my apology — but I don’t think it’s wrong. Or I might think that it is a little bit wrong, but that there was an outweighing good at stake: getting rid of the flowers that I don’t like.

The second element in Maslen’s account is the affective element. It is not enough to have the correct mix of evaluative and non-evaluative beliefs. You must also have certain feelings with respect to your actions, the agent affected by them, and the wider situation in which you both find yourselves. Maslen suggests that three feelings in particular are apposite:

(a) You must have sympathy for the plight of the victim.

(b) You must have self-hatred for your own malevolence.

c) You must have sorrow, despair and possibly fear regarding the wider situation.


I suspect all three of these things are absent in the unwatered flowers case. I didn’t feel any genuine sympathy for the plight of my partner. I’d probably prefer if she was not unhappy, but I wasn’t deeply moved by the possibility of her being unhappy. I also had no sense of self-hatred for the malevolence of my omission. On the contrary, I was happy to be rid of the flowers. And I certainly didn’t have some profound sense of sorrow and despair about the wider situation. I was happy to be given the opportunity (and excuse) to end the flowers’ lives.

The third element in Maslen’s account is the motivational element. On top of having the right mix of beliefs and emotions, you must also be motivated to do things to make up for your wrongdoing. In particular, you must:

(b) Have the desire to atone, which most commonly involves apologising for what you did.


It goes without saying that both were absent in the unwatered flower case. After the wrongdoing, I didn’t form an intention not to do X. If I were given the opportunity, I would undoubtedly do it again. I really didn’t like those flowers. Also, although I did apologise to her, I didn’t really have the desire to atone. I was merely going through the motions — kowtowing to social convention.

One final point. In certain parts of Pugh and Maslen’s paper it is suggested that the three elements by themselves are insufficient for remorse. The elements must also relate to each other in the right way. Quite what that relationship is, is a little bit unclear, but at a minimum it seems to require that the cognitive element drives the affective element, and that these in turn give rise to the motivational element.

I have tried to illustrate this account of remorse in the diagram below. 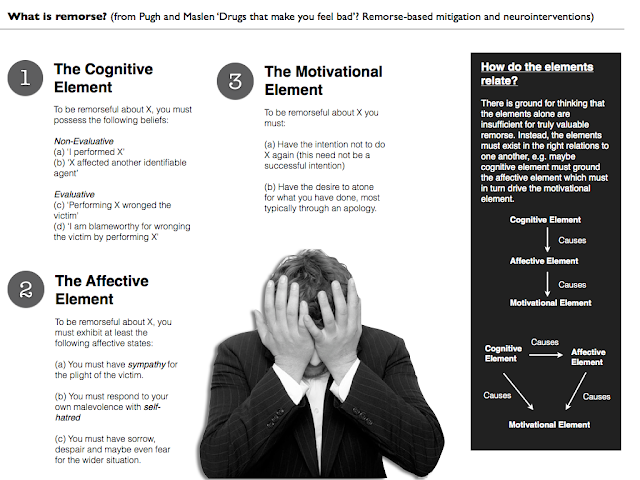 2. Why should we value remorse?
Now that we have a clearer sense of what is required in order to be genuinely remorseful, we can focus on the more important question: why should we care? There is, no doubt, an interesting psychological and sociological tale to be told about how we as a society developed a fondness for remorse. But let’s set that to the side and focus on the normative justification for remorse in criminal sentencing.

Contrast this with the retributivist. According to them, punishment is justified intrinsically, not instrumentally. In other words, it is right and proper to inflict harsh treatment (i.e. punishment) on some offenders because they deserve it (and irrespective of any desirable consequences this may achieve). There are all sorts of accounts of desert in the literature — I’ve written about them before — but most commonly they involve offenders who knowingly and willingly perform wrongful acts. There is some evidence to suggest that we are innate retributivists and hence quite comfortable with the retributive justification for punishment.

These two normative justifications are relevant here because mitigating factors are understood to lessen the justification for imposing punishment on a particular offender. So if an offender appeals to mitigating factors they are, in effect, arguing that the typical rationales for punishment are less applicable to their scenario: that punishment is less warranted in their case. All of this implies that remorse, when it is present, must undermine the warrant for punishment.

This is easy enough to understand in the consequentialist case. It is possible to see how someone who believes they did wrong, has profound feelings of sympathy for their victim, and forms a sincere intention not to do wrong again, might be in less need of punishment than someone who lacked these mental states. For instance, remorse might function as its own deterrent and might make the offender less of a social risk and more amenable to rehabilitation. In this manner, the presence of genuine remorse might allow us to achieve the desired consequences without the need for punishment.

It might be less easy to understand in the retributive case. If I willingly performed (or omitted) some wrongful act, then I deserve to be punished (according to the retributivist). It’s hard to see how genuine remorse lessens my desert. After all, retributivism is an inherently backward-looking justification for punishment: you did the crime so you must do the time. Post facto remorse doesn’t change the past. But there are aspects of the retributivist view that lend support to remorse. One slightly paradoxical idea is that retributivism is a better justification for punishment than consequentialism because it treats the offender with dignity. That is to say, it respects the offender’s agency and responsibility more than consequentialist. Part of respecting that agency might involve respecting the fact that they themselves have come to understand how problematic their act was and respecting the fact that they are now experiencing some psychological anguish as a result. This psychological anguish might be thought of as a kind of auto-retributivism (self punishment) that means the state is less warranted in imposing harsh treatment.

So those are some possible grounds for accepting the mitigating role of remorse. I’m going to leave it there for now. Hopefully this post has shed some light on the philosophical nature of remorse and its potential justifications.
Posted by John Danaher at 11:22 AM