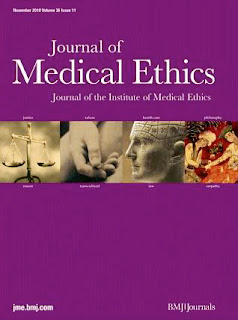 I have another academic paper coming out. This one tries to argue that there is a strong conservative case for favouring biomedical forms of enhancement. I don't really endorse the conservative moral framework outlined in the paper. My goal is simply to show how that outlook can be used to defend biomedical enhancement.

You might think it is odd for me to argue in this way - to defend a position using a set of moral principles that I don't accept - but I think this kind of faux sincere argumentation is valuable for two reasons. First, it shows how many different moral perspectives converge on the same conclusion -- this can be useful for both political and pragmatic reasons and can help to achieve a wide reflective equilibrium in ethical analysis. Second, and more selfishly, I think it helps you to develop your intellectual muscle. You are forced to

The paper will be published in the Journal of Medical Ethics. The official version will be out soon. Full details are below: