David Hume on Religion (Part 3): The Credentials of Revelation 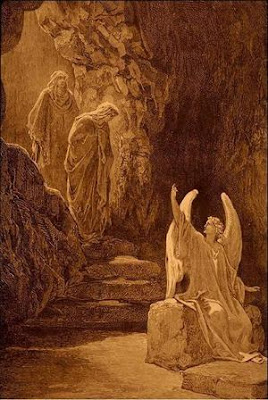 This post is part of my series on David Hume's critique of religion. For an index, see here.

I'm working off an article by J.C.A. Gaskin from the Cambridge Companion to Hume. In Part 2, I covered Hume's takedown of the design argument. Hume identified this argument as the core of natural theology. The other branch of theological argument concerns the verisimilitude of revelation. In this part, I cover Hume's objections to this branch of theology.

The picture above is by Albrecht Durer and it depicts a part of the resurrection story. This emphasises an important point. Although he was not explicit about it, Gaskin hints that Hume's main target in his work on miracles was, in fact, belief in the resurrection.

Of Miracles
Hume's argument on miracles is contained in the first volume of his Enquiry Concerning Human Understanding. It comes in two parts. The first part presents a general a priori argument mandating arch-scepticism in the face of claims of the miraculous. The second part presents case histories and a posteriori arguments showing how poor our evidence of the miraculous actually is.

Here, we shall focus on the a priori argument. It is worth considering what Hume himself had to say about this:


I flatter myself, that I have discovered an argument...which, if just, will, with the wise and learned, be an everlasting check to all kinds of superstitious delusion, and consequently, will be useful as long as the world endures.

Hume may well have been flattering himself, but the continued publication of book length critiques and defences suggest he may have been on to something.

Note that, as described, this is an argument concerning the rationality of belief, i.e. it is concerned with whether a report of a miracle can provide you with a reason for adopting religious belief. It is not concerned with whether someone who is pre-committed to a religion should accept a miracle claim, nor is it, as it is often interpreted to be, an argument for the in principle impossibility of miracles.
A Norm of Rationality
There are many avenues down which we could go in challenging Hume's argument. We could argue that he is wrong in defining miracles as he does and in assuming they are rare. We could also challenge his definition of a law of nature. Gaskin mentions these possibilities but prefers to focus on what he considers to be the core of Hume's argument.

To this end, he considers a hypothetical example drawn from the work of the Roman historian Tacitus. Tacitus was famous for collecting reports of miraculous or supernatural events and then refusing to comment on their veracity. For example, in response to a report claiming that some of the natives of Scotland were half man, half animal, Tacitus says: "Concerning such unverifiables I will express no opinion."

But suppose Tacitus was not so sober in his presentation. Suppose he stated that the Scots had (a) a single eye in the middle of their skulls and (b) could move from place to place by a form of wish-teleportation. What would Hume's norm have to say about these Cyclopoids?

Miracle reports are usually of this type, i.e. an extremely unlikely event going up against an extremely likely event. Only if the falsity of the report is more unlikely than its veracity, would we have any reason to believe it.

So Gaskin concludes by saying Hume has got the norm of rationality right.

I have linked to this site in my previous posts on Hume, but I want to be more explicit in my promotion of it now:

It has texts of all of Hume's works. It is maintained by Peter Millican, who has an interesting presentation on Hume and miracles, available here: