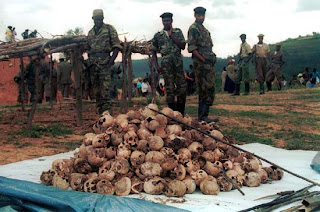 I am currently working my way through an article entitled "Did God Command Genocide? A Challenge to the Biblical Inerrantist".

In Part 1, I sketched the broad outline of Morriston's argument. What it boils down to is this: if God commanded genocide -- as he apparently did according to Deuteronomy -- then he needs to have had morally sufficient reasons for doing so. It is unlikely that he had such reasons. Therefore, the bible cannot be an accurate representation of what God said.

As noted in Part 1, the key for the inerrantist is to provide some moral justification of what God did that takes account of what is actually said in the bible.

In this post, we take a look at one such attempt from the Christian philosopher Paul Copan.


The Cultural Milieu
At the outset it must be acknowledged that Copan's discussion is not a response to Morriston's argument but a more general response to the arguments of the New Atheists.

The NAs relish pointing out the moral atrocities that are apparently condoned by Yahweh in the Old Testament. These atrocities seem to undermine the idea that Christians occupy the moral high ground. So you can see the attraction.

Copan tries to defend Yahweh. One of his key arguments is that any moral judgement we may wish to issue must take into account the socio-cultural milieu of the ancient near east (ANE). The ANE had very different, almost brutal, moral standards. It was, after all, a fallen world.

Yahweh and the Mosaic laws offered incremental moral improvement over what was common in the ANE. God was working with the available raw material in a way that respected human freedom and took the first steps on the path to the ethical ideal represented by Jesus.

Now questions arise as to why God would choose to do things in this incremental fashion, and as to whether Copan has got the cultural milieu of the ANE right, but we can leave these to one side. The historical relativism promoted by Copan still would not justify God's commanding of genocide. It would not give us the morally sufficient reasons we are looking for. Something more is required.


Copan's Justification
To his credit, Copan rises to the task. But he proffers a somewhat mixed argumentative strategy. He presents four lines of evidence that might justify the command:

(2) and (3) are clearly designed to downplay the genocide and so target P3 from Morriston's original argument. They are not successful because they simply ignore the clear command for genocide.
(1) and (4) seem like more straightforward moral justifications of God's command. Now, even if God has the right to take away life, as (4) is suggesting, surely he cannot take it away capriciously? He must have some reason for doing so. Thus we are left with (1): the idea that the Canaanites were so wicked that they had to be eradicated.
This seems to be the most popular line among biblical inerrantists. It is often coupled with the idea that the Holy Land needed to be purified for the Jews.
But why is genocide the only way to get rid of a wicked religion? Why not use the method of rational persuasion? Surely God would not use an inefficient and brutal method where a more subtle and human one was available?
These questions, rhetorical as they are, seem to force the inerrantist to defend the indefensible. One shocking manifestation of this comes from Copan's justification for the slaughter of the Canaanite children. Consider the following quote:

What then of the children? Death would be a misery, as they would be ushered into the presence of God and spared the corrupting influences of a morally decadent culture.

This would appear the apologetics at its worst. Indeed, after the passage just quoted, Copan goes on to justify other killings as a form of necessary "collateral damage".

If any of this is going to work, then it must be shown that the Canaanite religion was irredeemably wicked, to such an extent that genocide was the only option for its eradication. That is a proposition that will be explored in future entries. 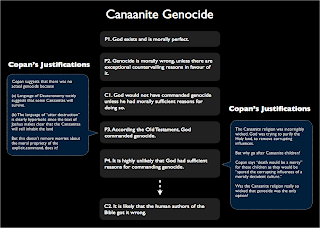