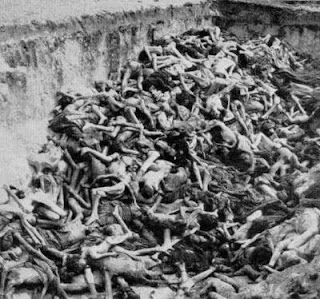 I am currently working my way through an article entitled "Did God Command Genocide?". Part 1 outlined Morriston's key argument: that the idea of God commanding genocide -- as the bible suggests he did -- is highly unlikely unless he had sufficient moral reason for doing so. He is unlikely to have had sufficient reason, so there is good reason to reject biblical inerrancy.

In Part 2, I covered Paul Copan's attempted justification of the Canaanite genocide. As we saw there, Copan's defence boils down to the following: the Canaanite religion was incorrigibly wicked, it had to be eradicated.

In this post we take a look at the charge sheet against the Canaanite religion. This charge sheet usually pinpoints three issues of concern.


Troubling Sexual Practices
The first is the charge that the Canaanites engaged in morally circumspect sexual practices, including: adultery, having sex during a woman's menstrual period, homosexuality and bestiality.

Now we may not find these objectionable (I have concerns about the lack of consent in bestiality myself), but let's take it that they are morally condemnable. Is the fact that the Canaanites engaged in them sufficient to warrant their extermination?

Morriston thinks not. He suggests that all available evidence points to the fact that such practices are found in every society, that they are not limited to Canaanites. Thus it would not be right to single out the Canaanites. Consider also that in the destruction of Sodom God was willing to countenance the possibility of innocent Sodomites (Genesis 19). Why not in this instance?


Child Sacrifice
The second argument against the Canaanites is that they engaged in child sacrifice. This would seem to be a weightier charge than the first. But again we must ask: is it enough to warrant genocide?

Again, Morriston thinks not. His main reason for thinking so is that several biblical passages suggest that child sacrifice was not clearly condemned by God. Thus there is no reason for attacking the Canaanites on these grounds.

The classic examples of this come from Exodus and Genesis. Exodus 22:29c-30 seems to offer express approval of child sacrifice. Likewise, the infamous Abraham-Isaac story from Genesis 22 seems to praise someone who was willing to sacrifice their child. Admittedly in this latter case, Abraham did not have to go all the way.

In contradistinction to this, the unfortunate Jephtha in Judges 11:30-40 was forced to go all the way. The story has it that Jephtha asked God to help him gain a victory against the Ammonites. To sweeten the deal, Jephtha promised to sacrifice the first person he met after the battle. Alas, the first person he met was his daughter. He allowed her to bewail her virginity for two months but after that he sacrificed her in accordance with his vow.

Jephtha was the Judge of Israel. So his recorded experiences offer pretty compelling evidence against the idea that child sacrifice was enough to warrant Canaanite genocide.


Ritual Prostitution
The final charge against the Canaanites is that they practiced a form of ritual prostitution. Three biblical passages are offered in support of this: Genesis 38: 15, 22-23; Deut. 23: 18-19; and Hosea 4:14. Morriston goes through these passages one-by-one.

Genesis 38 describes events that took place long before the Canaanite genocide. The relevant passages only suggest that there was once a practice of ritual prostitution. Is that enough to warrant genocide over four hundred years later?

Elsewhere in his article, Copan suggests that there had to be build-up of wickedness amongst the Canaanites during the period of bondage in Egypt. Only this build-up explains why the Israelites were allowed to carry out the genocidal war when they did, and why they were allowed to take the land belonging to the Canaanites. Thus the reference to the earlier period described in Genesis 38 would seem to be irrelevant.

The Deuteronomy passages simply say that the Israelites should not engage in ritual prostitution. They do not single out the Canaanites as special offenders.

Finally, the Hosea passages suggest that the practice of ritual prostitution was common long after the Canaanite genocide. If it was not wiped out at the time, how can its desired eradication be a sufficient reason for genocide? Surely God would have gotten rid of it if that was his desire?


Extra-Biblical Evidence
Morriston points out that all the evidence concerning Canaanite wickedness discussed to this point comes from the bible, a text that was written and compiled by the victorious Israelite conquerers. Victor's historiography is always biased. What does the extra-biblical evidence say?

Well, Morriston says the best we can do is to look at recent scholarly work on tablets unearthed at Ras Shamra on the northwest Syrian coast. These tablets come from the Bronze Age Canaanite city of Ugarit. This city was at its height roughly around the time of the Israelite arrival.

These tablets suggest that the Canaanites were polytheistic, and fond of a good animal sacrifice. But nowhere is child sacrifice or ritual prostitution mentioned. 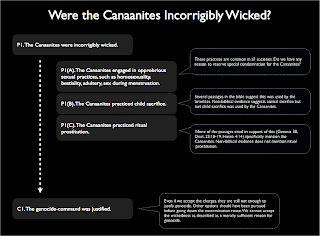 Okay that's it for now. In the final part, I will wrap up some loose ends and see whether Morriston's argument remains cogent.
Posted by John Danaher at 10:13 PM