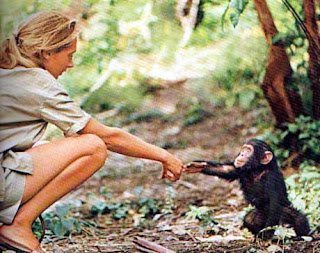 (I struggled to find an apposite image to accompany this post. I settled on this simply because I liked it)

I've previously discussed Stephen Maitzen's work on the implications of skeptical theism for morality. Over the next couple of posts I am going to take a look at the following article:

The idea that ordinary morality has disturbing implications for theism has been aired before. For example, Dean Stretton's article "The Moral Argument from Evil" makes this point, as does Raymond Bradley's "A Moral Argument for Atheism", as does James Rachels's "God and Moral Autonomy".

All of these arguments suggest that there is an incompatibility between ordinary moral obligations and standards (or moral autonomy in Rachels's case) and God's existence. Maitzen attempts something similar in his article.

I'm going to break the discussion of Maitzen's argument into two parts. This part presents the basic outline of the argument. Part 2 looks at some detailed objections to the argument along with Maitzen's responses to them.


1. Some Preliminary Issues
Before becoming embroiled in the intricacies of the argument a few preliminary observations are in order.

First, as with my previous discussion of Maitzen's work, I am going to try to illustrate the argument with an argument map. This means that during the substantive discussion I will pause to present a series of numbered premises and conclusions that I can plug into the diagram at the end. Please note that my numbering does not follow the numbering that Maitzen uses in his article. This may make it difficult to cross-compare, my justification for it is that I found it easier to understand the argument by doing it this way.

This leads me to a third observation. Does Maitzen's argument (or indeed Bradley's or Stretton's or Rachel's) offer good support for atheism? Maitzen's article does present an argument that reaches the conclusion "God does not exist".

The idea is that the commitment to ordinary morality is too strong to give up, so belief in God must give way. This might provide support for George Rey's meta-atheist thesis, the argument that no one really believes in God. Based on his interview over at commonsenseatheism, this is something with which Maitzen agrees.


2. Theism Implies No Moral Obligations
The first, and most difficult, part of Maitzen's argument suggests that coupling theism with some standard resolutions to the problem of evil leads to the conclusion that there are no moral obligations.


a. Principle of Theodical Individualism
We begin by simply conceding that God might exist and then draw out some of the difficulties with accepting his existence. The major difficulty comes from what is called the principle of theodical individualism:


Necessarily, God permits undeserved, involuntary human suffering only if such suffering ultimately produces a net benefit for the sufferer.

This principle of theodical individualism amounts to a constraint on how God can treat humanity. It is an accepted constraint on any resolution of the problem of evil. This may set some alarm bells ringing since the idea of a constrained God might be anathema to some theists. We can say several things in response.

First, this is a standard Kantian principle that highlights the moral impropriety of treating someone as a means to an end. So it suggests that we cannot cause a person to suffer greatly simply to improve the lot of other people. This is the type of thing we would expect of a morally perfect being (Maitzen gives a thought experiment to make this point).

If that seems to presume too much, we can always fall back on the fact that numerous theistic philosophers accept it anyway (e.g. Eleanor Stump, William Alston and Marilyn McCord Adams) and that it is their belief system with which we are concerned in the first place.

Another objection to TI, not explicitly discussed by Maitzen but clearly lurking in the background, would be an Ockhamist one. The Ockhamist would say that it is meaningless to speak of moral constraints on God because he is the one who gets to define those constraints. We can respond by pointing out that if one is an Ockhamist, one has already abandoned ordinary morality. So the argument does not apply.

We can say further that the Ockhamist will still have serious problems knowing if he/she has any moral obligations due to the somewhat cryptic nature of God's attempts to communicate moral standards to us.


b. Theodical Individualism + God = No Obligations
Maitzen argues that if we accept that God exists, and we accept TI, we must accept one of two things: (a) that we have no moral obligation to prevent suffering or (b) that our moral obligations are defined by God's commands.

Why would we have to accept that we have no moral obligations? Think about it: if TI is true, then all actual instances of suffering ultimately benefit the sufferer. If there is an ultimate benefit you have no obligation to prevent that suffering.

Take a simple example: childhood vaccination. The actual act of administering the vaccine might cause the child to suffer, but because vaccination is ultimately beneficial you are under no obligation to intervene to prevent it. The theist (who accepts TI) is in this position whenever they encounter suffering.

Now they might respond by saying there is nothing to stop them from intervening if they see fit. But this is merely to identify a permission to intervene not an obligation. As we shall see in a moment, ordinary morality suggests that we have genuine obligations to intervene in some situations.

We make this point even stronger if we wish. We can say that if all instances of suffering ultimately benefit the sufferer, we are permitted to actively cause suffering. Again, think about the vaccine example: those who administer the vaccine are permitted to cause the child some suffering because of the ultimate benefit that accrues. Is the same not true for the theist who accepts TI?

The other possibility is that a theist who accepts TI still has obligations emanating from God's commands. There are two problems with this. First, as discussed previously, God's commands are difficult to identify and difficult to extrapolate to novel circumstances. So it is not clear that they provide any reassurance to the theist who wishes to prevent suffering.

Let's stop here and summarise the components of the argument to this point.

These will be put into the argument map at the end.
3. Ordinary Morality Implies Obligations
The second, and far easier, part of Maitzen's argument is that ordinary morality implies the existence of moral obligations. Maitzen does not define ordinary morality, or attempt to provide a concrete ethical theory that supports the existence of obligations. Instead, he takes the existence of moral obligations as a datum that is in need of an explanation, an explanation that cannot be rooted in theism.
Let's consider some cases that seem to support the genuine existence of moral obligations. First, consider the drowning friend example that I mentioned in a previous post. Here, your friend has fallen into the water, is incapable of swimming, and you are the only one in a position to save him. The question is whether you have an obligation to save him (assume there is no serious risk to yourself)? It seems obvious that the answer is "yes".
Even in situations where there is a risk to ourselves or where we are unqualified to prevent the suffering, there is an obligation to seek appropriate help. This is most apparent from criminal law cases where the court imposes liability on failures to act.
Later in his article, Maitzen suggests that the criminal law offers a reasonable insight into the demands of ordinary morality. As someone who researches the philosophy of criminal responsibility, I think that is about right (plenty of controversy though). Anyway, the criminal law doesn't impose a general obligation to intervene (where "general" means "applies to everybody"), instead it identifies specific situations in which an obligation arises. These include situations where you are the only person who knows about the suffering, or where you are a qualified official.
To give but one example, in the English case of Stone and Dobinson [1977] 2 All England Reports 341, a couple were held guilty of manslaughter for failing to seek professional help for their anorexic housemate. Because the anorexic woman lived with them they were held to have an obligation to help her even though she refused to eat. (The anorexic was the sister of the woman in the couple, but this was irrelevant to the finding of an obligation to seek help -- even if it was relevant it would not defeat the point that ordinary morality holds to genuine moral obligations).
So there are genuine moral obligations arising from ordinary morality. Now, as hinted at above, we might worry about the theoretical foundations of these obligations. But this is basically irrelevant to the argument being made. We are not concerned with which meta-ethical theory can account for these obligations; we are concerned with whether belief in God can account for them.
Let's summarise the components of this part of the argument:
4. Ordinary Morality Implies Atheism
Okay, so now we are in a position to bring both strands of the argument together. The diagram below provides the relevant map. This follows the mapping procedure outlined at the end of this post. 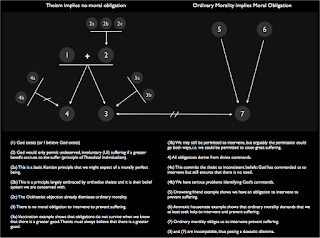 As can be seen, conclusion (3) and conclusion (7) are in direct competition. And since conclusion (3) follows from belief in God, it seems that ordinary moral obligations cannot coexist with God. Thus, we have a doxastic dilemma for the believer.
In Part 2 we will consider more detailed objections to this argument.
Posted by John Danaher at 2:56 PM

Email ThisBlogThis!Share to TwitterShare to FacebookShare to Pinterest
Labels: Maitzen on Morality and Atheism