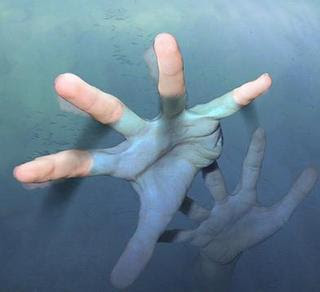 This post covers some of Stephen Maitzen's arguments concerning the incompatibility of skeptical theism and morality. Part 1 introduced us to the whole idea of skeptical theism. It outlined the dialectical context in which it arises and the problem it tries to solve (evidential problem of evil).


Skeptical Theism leads to Moral Paralysis
As we saw, skeptical theism is based on the following three premises:

These are clumsily expressed, but they amount to the following: we do not know enough about morality to say that no greater good arises from particular instances of suffering and pain. Taken together, these premises support the following conclusion:
This is a useful conclusion for the theist who wants to reconcile the existence of a morally perfect God with the existence of great suffering or pain.
A number of authors (e.g. Graham Oppy, Michael Almeida and Stephen Maitzen) maintain that skeptical theism is too successful. If we were to embrace it, we would have to embrace a profound scepticism concerning the existence of moral obligation.
To see why they might think this, consider the following scenario. You and a friend are out fishing one afternoon. It is beautiful, balmy summer afternoon. The birds are singing, the fish are biting, life is good.
Suddenly, the weather takes a turn for the worse. A severe gust of wind knocks your friend into the water. He is not able swim. He flails desperately, taking large gulps of water as he does so. If you do nothing, his lungs will soon become flooded, and he will asphyxiate and die.
Here's the key question: do you have a moral obligation to intervene and save your friend's life? Assume, you are a good swimmer, trained in life-saving and that the rescue would be an easy one.
Most people would say that this is about as clearcut a case of a moral obligation as there is. But, argue Maitzen et al, this conclusion is not open to the skeptical theist. They have accepted that God may have moral reasons for allowing suffering, reasons to which we have no epistemic access. Remember, our knowledge of morality is incomplete, fallible and defeasible; God's knowledge is complete, infallible and final. What right have we to assume we should intervene in what could be part of God's greater plan?
These assertions help the critic of skeptical theism make the following argument:
In effect, this argument is saying that skeptical theism leads to a form of moral paralysis. How does the skeptical theist respond?
Skeptical Theist Responses
Maitzen notes that skeptical theists have responded to this argument in at least three different ways. We will give these numbers so that they can be put into the argument map at the end.
Are these responses any good? Let's take them in turn.
The first counterargument is clearly fallacious. It is not the fault of the moral paralysis argument that consequentialism is being assumed: this was the assumption of the skeptical theist argument. It assumes that God can allow suffering if it produces some greater good. This is straightforwardly consequentialist reasoning. Skeptical theism does not suggest -- nor does anyone make the argument -- that God has some deontological duty to ensure that certain people suffer.
The second counterargument can be defeated with a counterexample. This is the "Skeptical Tribesman" example (Maitzen's, not mine):

Imagine that a well-armed tribesman walks into a jungle field hospital and sees someone (known to us as the surgeon) about to cut open the abdomen of the tribesman's wife, who lies motionless on the table. It looks to the tribesman like a violent attack, so he sees good reason to intervene and prevent the surgeon from carrying out the attack. But suppose that this tribesman has heard some of his fellow tribespeople talking about the wonders of "western medicine". They say it can heal people of terrible illnesses but that it often involves strange procedures.

To the skeptical theist, we are all in the same position as the tribesman. And we are in this position all the time. Thus, our doubts about our moral knowledge, eliminate our moral obligations.

The third counterargument also faces insurmountable difficulties. We can take it that the idea is that God has given us commands that define a certain range of moral obligations. This range is unaffected by skeptical theism.

Maitzen points out three serious flaws in this idea. First, we are not very good at deciding what counts as one of God's commands. Indeed, there are disputes over whether certain passages of the bible constitute divine commands. For example, Jews maintain that Genesis 17:10 commands circumcision; Christians argue that this is not the case or that it has been superseded.

The problem is that none of the alleged commands are self-authenticating. What usually happens is that we assume we understand what is (roughly) right or wrong and use this as a basis for identifying something as "God's command". This is precisely the type of thing that skeptical theists claim we cannot do.

Second, and similarly, even when we have identified commands, we obey them selectively. This is readily apparent in the existence of a wide range of commands that are ignored. For example, the rules on breeding livestock, sowing seeds, and eating shellfish that are found in Leviticus; or the rules imposing the death penalty on disrespectful children, adulteresses and homosexuals.

It doesn't help to say, as some have, that these commands are specific to the cultural milieu of the ancient near east (ANE). To say such a thing is to presuppose a knowledge of morality that skeptical theists claim we do not have.

Finally, even if we have identified commands, they very often do not provide us with the type of moral guidance we need. The specific commands (such as those on cattle-rearing) are of limited significance. To generalise from them would require an insight into God's purposes that is anathema to the skeptical theist.

More general commands -- such as "love thy neighbour as thyself" -- are often difficult to apply in specific instances. Go back to the drowning friend example. Suppose I hate myself and had been planning to bring about my death through drowning. Does this mean I should leave my friend die? We'd probably say "no": we can't make that sort of decision for our friends. But to say this is to go beyond the ambiguity of the general command.

Let's summarise all these objections so they can be added to the argument map at the end:

In conclusion, it seems as though a skeptical theist must be a moral nihilist.

This argument is mapped below. 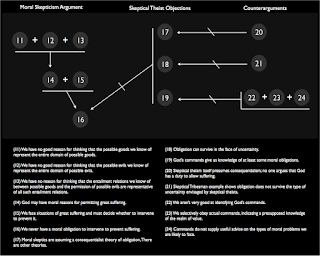 Email ThisBlogThis!Share to TwitterShare to FacebookShare to Pinterest
Labels: Maitzen on Morality and Atheism