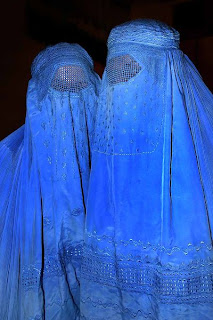 I seem to recall, hidden somewhere in the hazy past of this blog, there was a promise to add more material on the psychology of religion. I know I haven't been fulfilling that promise thus far, nor, indeed, have I been finishing out my other projects. I suspect this may be frustrating for some, but this post can be seen as a mild restitution.

You see, I have been doing a lot of reading around the psychology of religious beliefs, practices and rituals recently. Its part of an exploratory side project I'm pursuing on law and religion. One thing I have been focusing on is the contrast between different types of religious believer.

The most extreme variety is, of course, the fundamentalist. And one book that I have been reading is called The Fundamentalist Mindset. It is a collection of essays on the psychological structure of fundamentalism. Because the focus is on structure, as opposed to content, the authors include what might be termed secular fundamentalist sects in their analysis.

Anyway, there is much to chew over in this collection, but the opening essay offers a brief synopsis of the five main features of fundamentalism. These are fleshed out in more detail in the subsequent essays.

I thought I would share the five features here:

So there you have it: the five features of fundamentalism. 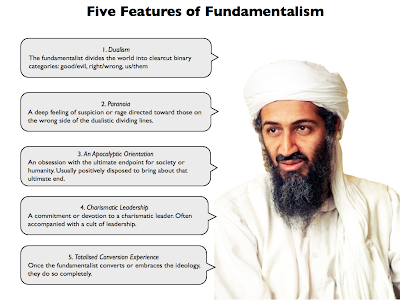 Addendum:
Just after I put this up, I happened to come across this post from Ken Pulliam on Christian Fundamentalism. It seems to be roughly in accord with the above.

Email ThisBlogThis!Share to TwitterShare to FacebookShare to Pinterest
Labels: Psychology of Religion