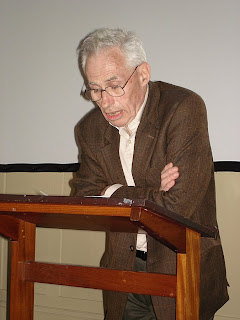 Richard Swinburne is a highly respected contemporary Christian philosopher. In his impressive back-catalogue you will find painstaking evidentialist arguments supporting everything from the existence of God, the truth of the resurrection, to the validity of core Christian doctrines such as the trinity and the incarnation.

Jeremy Gwiazda is a recent CUNY PhD whose scholarly career is only in its spring. And yet, in a series of short papers (and in his PhD thesis), he has had the gall* to take on some of Swinburne's most important arguments.

It has all the makings of a modern day David and Goliath. Will the young upstart come out on top yet again? We'll see.

In this series I will look at Gwiazda's criticisms, using the following three papers as my guide:

In this introductory post, I will provide some background on Swinburne's argument. Gwiazda focuses on the same basic deficiency in the all three of the articles, so this material will be essential reference as we go through them.
1. Bayes' Theorem
Ours is a Bayesian age. There are a number of excellent guides to Bayes' theorem online. I cannot hope to improve upon them here so I will provide a Spartan summary of the basic details.
Bayes' theorem is a formal result from probability theory. However it has some interesting philosophical implications for our understanding of rationality and induction. How so? Well, Bayes' theorem appears to give a mathematical formula for updating our degree of confidence in a hypothesis or belief based on our encounter with some evidence.
The theorem, along with a description of its basic terms, is given in the diagram below (click to enlarge). 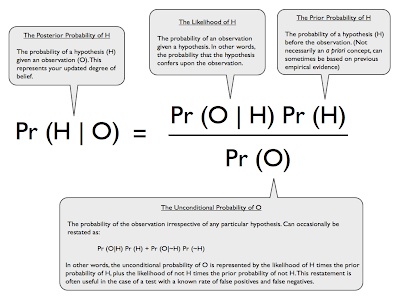 In case you don't want to click on that and read it, the most important terms for the purposes of analysing Swinburne's argument are the likelihood of H and the prior probability of H.

The former represents the probability that a hypothesis confers on a piece of evidence. This tells us nothing about the probability of the hypothesis. Suppose you hear a knocking sound in your attic late at night. You propose that it is a group of gremlins getting rowdy. This hypothesis may confer a high probability on the knocking sound. After all, rowdy gremlins might be inclined to make noise. But this shouldn't encourage us to think that the gremlin hypothesis is itself highly probable. Before we can think that we need to know the values of the other quantities.


2. Swinburne's Argument
Swinburne's central argument for the existence of God -- in the imaginatively titled The Existence of God -- is Bayesian in form. He looks at eleven pieces of evidences and feeds them through Bayes' theorem both individually and collectively. These pieces of evidence include things like purported religious experiences, apparent design, consciousness and so on.

This basic form is illustrated below. Obviously, Swinburne's goal is to show that Pr(h|e&k) is high (or at least higher than any alternative explanation of the evidence). 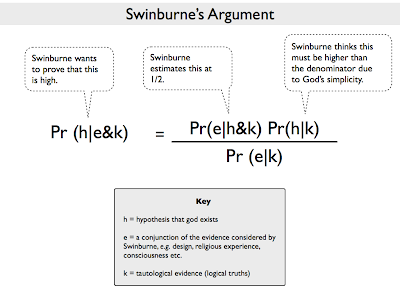 3. God's Simplicity
Giving the form is all well and good, but to make it meaningful some numerical values are needed. This, according to Gwiazda, is where the argument falls down. Before looking to Gwiazda's criticisms, we'll review what Swinburne actually says.

First, as noted in the diagram, Swinburne estimates that the likelihood of God's existence is about 1/2 or 0.5. This is the probability that God (and the tautological evidence) confers upon the evidence.

Second, Swinburne thinks that Pr(h|k) or the intrinsic probability of God's existence is high, whereas the Pr(e|k) is very low. The reason for this is that a simpler hypothesis is more probable than a complex one. And God is simple, whereas the evidence is complex.

In the next part we'll see why Swinburne's approach is mistaken and why he needs to provide more precise figures to make his argument work.

*It has oft been noted that the internet needs a sarcasm-button. I add my voice to the swelling chorus supporting that idea.
Posted by John Danaher at 1:15 PM

Email ThisBlogThis!Share to TwitterShare to FacebookShare to Pinterest
Labels: Swinburne and Gwiazda