The Dialectical Necessity of Morality: Methodology and Terminology 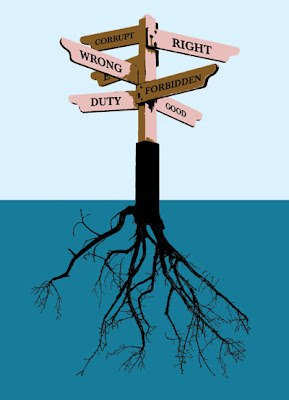 This post is part of my series on Deryck Beyleveld's book The Dialectical Necessity of Morality. In the book, Beyleveld tries to argue in favour of Alan Gewirth's Principle of Generic Consistency (PGC). For an index, see here.

As this is the first truly substantive entry in the series, I will present a brief sketch of the argument to the PGC. I will follow this with a discussion of the methodology underlying the argument. I will close by running through some of the terminology that will be essential for understanding the argument.


1. The Argument in Brief
As stated in the introduction, the PGC is (allegedly) the supreme moral principle that must be accepted by all potentially purposive agents (PPAs). The following is a quick sketch of the argument to the PGC:

As should be apparent from the numbering, several critical portions of the argument are left out of this sketch. Still, enough is presented to give you a feel for what is trying to be proved. Beyleveld (and Gewirth) are trying to show that anyone who thinks that they are a PPA must, on pain of inconsistency, accept that all PPAs have claim rights to their freedom and well-being. This is a very strong claim.
2. Methodology
Beyleveld adopts a particular style of argument which he terms dialectic. He contrasts this with an assertoric method. A dialectic argument is something which appeals directly to the subjectivity of the agent and deduces conclusions from premises to which an agent would (subjectively) be inclined to agree. An assertoric argument would deduce its conclusions from statements about the (objective) properties of agents.

Furthermore, the argument is dialectically necessary, not merely contingent. This is because the premises are ones to which any PPA, in virtue of being a PPA, must agree.


There is an important point to be made about the methodology underlying the argument, particularly if one wishes to assess its metaethical pretensions. Since this is exactly what I wish to assess, I am going to make it, however, it should be noted that, as far as I am aware, neither Beyleveld nor Gewirth see fit to do the same.


The key questions in metaethics are, roughly, do moral terms like "good", "bad", "right", and "wrong" have truth values? Do they refer to actual states of affairs? Are those states of affairs mind-dependent or mind-independent? How can they be known?

If one rejects non-cognitivist positions (i.e. positions maintaining that moral terms do not have truth values) then one must accept that terms such as good, bad, right and wrong can be correctly applied to certain states of affairs. This is to embrace the existence of some identity-relationship between a term such as "good" and an actual state of affairs.

The methodological question is: how can this identity-relationship be established? There are two ways in which this can be done.

First, if the term has some universally agreed-upon referent, then one can investigate the referent and establish the relationship between it and the term. The classic example of this method in action comes from the identity-relationship between "water" and "H2O". Because the term water had a universally agreed-upon referent (the colourless, odourless, liquid that everyone drinks) scientists could work out its chemical structure and then establish the equivalency between H2O and water.

Second, if the term has some widely agreed-upon meaning, then one can derive a set of platitudes about the term and see which state of affairs best instantiates those platitudes. This method is very popular in metaethics where there is considerable disagreement about the referents of moral terms, but some reasonable agreement about the meaning of those terms (or what would need to be the case for them to successfully refer). Indeed, the method is used by Michael Smith in his book The Moral Problem, by Robert M. Adams in his attempt to develop a modified divine command theory, and, in a negative way, by Richard Joyce in his argument in favour of error theory. 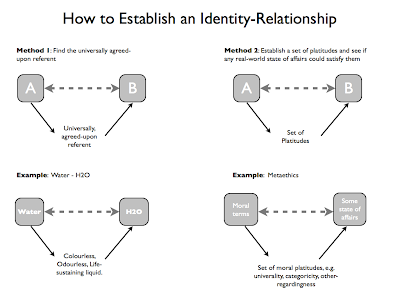 It should come as no surprise then to learn that the second method is (implicitly) adopted in Beyleveld's work. He begins with the following four platitudes about moral "oughts" and criteria of practical reasonableness: 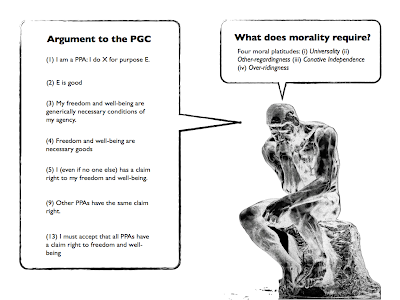 3. Terminology
One of the more annoying things about the book is the terminology (particularly the acronyms) with which it is overloaded. Because of this, I thought it might be useful to provide some simple explanations of the terminology used throughout the book. I'll add to this as I go along and I will repeat the explanations whenever I introduce a term in future entries.

That list barely scratches the surface but it does cover the more important stuff.
In the next post we will begin to work our way through the stages in the argument to the PGC.
Posted by John Danaher at 11:38 AM

Email ThisBlogThis!Share to TwitterShare to FacebookShare to Pinterest
Labels: The Dialectical Necessity of Morality