Tweet
This post tries to explain the Nash bargaining solution. This is part of some work I am doing on distributive justice, see here for more. It is worth noting at the outset that the Nash bargaining solution is distinct from the Nash equilibrium. Since both concepts are mentioned in this post, it will be important to keep the distinction in mind (I'll give a fairly simple explanation of a Nash equilibrium in a moment).


1. Why the need for a Bargaining Solution?
Consider the following simple bargaining game:


Two players, A and B, are given 100 dollars to divide between them. According to the rules of the game, they must each make a demand for some fraction of the 100 dollars simultaneously. If the sum of their fractional demands is less than or equal to 1, the division will go ahead; if it is greater than one, the money is lost to both.

If you were a player in this game, how much should you demand? 50 dollars? 75 dollars? 25 dollars? Or something else? Game theory tries to help us to answer those questions. It is the formal analysis of strategic interactions.

When trying to decide what to do, game theory offers some simple guiding principles. First off, if possible, you should try to play a strictly dominant strategy, i.e. a strategy that yields the best result for you no matter what the other player does. As it happens, the divide-the-money game does not have a strictly dominant strategy: if my opponent demands $50, I am best off if I demand the same. But if my opponent demands $75, I am not best off demanding $50, instead I should demand $25. 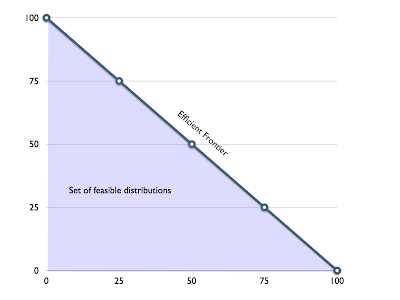 The analysis so far is disappointing. The basic principles of game theory show that there is no unique solution to the bargaining game. This is where the Nash bargaining solution comes into play. It tries to show how, given certain assumptions, there can be a unique solution.


2. Nash's Bargaining Solution
To understand the Nash bargaining solution, we will look at a general model of a bargaining game as opposed to a specific numeric example. The math is fairly elementary. I take this version from here (without doubt the best serious introduction to game theory).

Again, there are two players, A and B, who seek to split some total value v, through some sort of negotiated agreement. If no agreement is reached, A will get a and B will get b. These figures represent the payoff that the players can achieve on their own, independent of a negotiation. Sometimes these are referred to as BATNAs (Best Alternatives to Negotiated Agreement).

In order for the negotiated agreement to be worthwhile, it must be the case that v is greater than the sum of the BATNAs. In other words: a+b < v. This means that there is a positive surplus (v - a - b) to be achieved from the negotiation.

These expressions are known as the Nash formulas. They just say that the positive surplus (v - a - b) is divided between the players in the proportions h:k:

or in slope-intercept form:


This can be represented geometrically as follows. 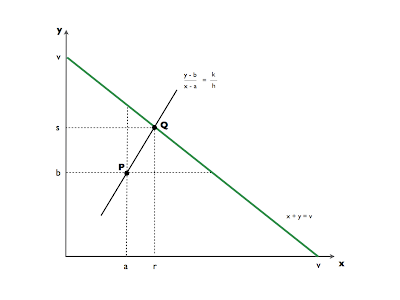 In this diagram, P represents the disagreement point. It is what can be achieved independently of a negotiated agreement. All divisions of v in the proportions h:k lie along the straight line joining P and Q. The efficient frontier is represented by the thick green line joining (v, 0) and (0, v).

The Nash Bargaining solution is represented by the point Q (the intersection of the two lines). As can be seen, it is a unique point and hence constitutes a unique solution to the bargaining game. The coordinates of this point (r, s) are the parties' payoffs after the agreement.

3. Why this Solution?
To this point, nothing has been said about the credibility of the Nash bargaining solution. Indeed, the formulas cited above are agnostic about the mechanism through which the agreement is actually reached.

The credibility, such as it is, of the solution comes from certain assumptions (axioms) that Nash formulated about the bargaining process. First, Nash assumed that the bargaining game was cooperative as opposed to non-cooperative. These terms are used in a technical sense in game theory and, as is the case with most technical terms, they bear little resemblance to the mundane everyday use of those terms.

Game theorists generally think that non-cooperative games are more significant because the conditions necessary for cooperative games are rarely met. However, they may be met if there is some sort of enforcement mechanism that would ensure that the joint agreement was implemented.

Nash modeled bargaining as a cooperative, as opposed to a non-cooperative, game and this allowed him to reach his solution. (Note: there is an argument for thinking the same solution would apply in certain non-cooperative games. However, I'm not going to explain it here.)

In addition to this, Nash made several key assumptions about how the players would act. Before listing them, it should first be noted that the standard general assumption of decision theory is that actors have utility functions for payoffs, and that they seek to maximise their utility (I hope to cover the different forms of utility function at a later date). Nash's additional assumptions were as follows:

Through these assumptions, Nash guarantees a unique solution to the bargaining game. The solution will lie along the efficient frontier of the set of feasible solutions, and will be the point at which the product of the the players' gains over the disagreement point is highest. In the example given above, this would imply that (r - a)(s - b) is higher than any other value along the line (v, 0) to (0, v).
To put it another way, it is the point at which the aggregate utility of the players is maximised. This solution is unsurprising given the economic basis of Nash's theory.
4. Do the Assumptions Hold Up?
Nash's assumptions are the key to his solution. Without them, he would not be able to find a unique solution to the bargaining game. So are they reasonable assumptions?

One of the more interesting findings from experimental economics is that IIA is almost certainly false. One might think that if A is preferred to B and B is preferred to C, the removal of C from the set of possible choices would make no difference. As it turns out, there are all sorts of weird effects that can arise when choices are added and removed. Dan Ariely's discussion of the Economist's subscription rates is instructive in this regard.

Although IIA is false, it might be possible for players to adopt it as a conventional constraint on their bargaining. But if we are going to do that, it might be possible for other conventions that yield different, but still unique, solutions to be adopted. Indeed, Kalai and Smorodinsky have done just that with their "monotonicity" axiom. This was used by David Gauthier in his book Morals by Agreement (well worth reading, if you get a chance). I'll be covering Gauthier's basic argument soon enough.

Nash's other assumptions seem more plausible. The other potentially problematic one is the symmetry assumption. For it to be true, different players would have to have identical utility functions. But one may wonder whether it is possible for such symmetry to really exist.


5. Conclusion
Despite these limitations, the Nash bargaining solution is still a noteworthy achievement. It shows that unique solutions to bargaining games such as those discussed above are not implausible.

One may ask: why am I interested in this? Well, the answer is that bargaining theories such as this can make important contributions to our understanding of social contracts. I'll look at those contributions in later entries.
Posted by John Danaher at 11:18 PM