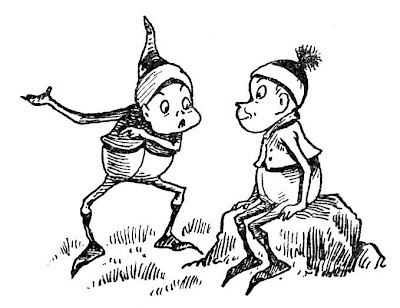 Jennifer Faust's article "Can Religious Arguments Persuade?" has received some exposure on the internet already. A youtube user by the name of ProfMTH has a two-part video series on it which you can watch here.

Despite this pre-existing coverage, I've decided to do two quick blog posts on her article. I do so because, at its heart, it contains an interesting and useful account of rational persuasion. She applies this account specifically to the topic of religious argumentation, but it clearly has a much broader application. Indeed, I think her account could be an important part of everyone's philosophical toolkit. It can help in understanding how we respond to argumentation and in formulating strategies when trying to persuade others.


1. Persuasion and the Naive Account
I am sure that everybody reading this has had the opportunity to engage in linguistic exchanges with their fellow human beings. These exchanges can be called dialogues. Dialogues come in several distinct forms. The argumentation theorist Douglas Walton distinguishes six forms of dialogue:


Although awareness of these six types of dialogue is not essential to understanding Faust's account of rational persuasion (she doesn't mention them at all) I think it will be useful to keep them in mind. Primarily because an awareness of the type of dialogue one is engaged in can help one to formulate an effective argumentative strategy as some styles of argument are more appropriate in certain types of dialogue.
Anyway, arguments play an important part in all of these dialogues. Arguments are used to change opinions, prove hypotheses, resolve dilemmas and settle negotiations. An argument can be defined as a set of premises leading to a conclusion or set of conclusions {P1...Pn/C}. In order to be effective, an argument will need to be rationally persuasive. This means that the person to whom the argument is directed must be obligated to accept the conclusion. (Note: persuasive arguments are distinct from persuasive dialogues).
The naive, traditional account of rational persuasion -- the one to which Faust objects -- is that an argument is persuasive whenever it is (i) valid and (ii) true. In other words, whenever the conclusion actually follows from the premises and whenever those premises are true.
Faust thinks that this account is naive because it fails to acknowledge the role of antecedently held beliefs. So she proposes an alternative.

2. Faust's Account of Rational Persuasion
In developing her alternative, Faust first asks us to bear in mind the subject S to whom the argument is being directed. She then formulates the following three conditions of persuasion:

This account improves upon the naive one by acknowledging the impact of subjective probabilities and antecedent beliefs on the persuasiveness of an argument. 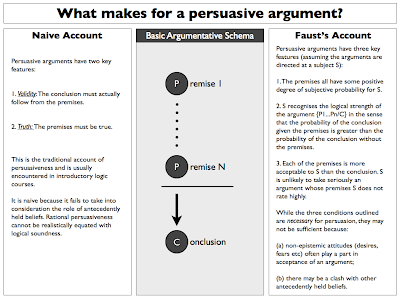 3. Barriers to Persuasion
However, this account is still incomplete because the three conditions, while necessary for persuasion, are not sufficient. There are two additional factors to bear in mind when assessing the persuasiveness of an argument. They are (i) non-epistemic mental states; and (ii) contradictory antecedent beliefs.
Non-epistemic mental states are things like desires, hopes and fears. We can easily imagine how such states might impede one's acceptance of an otherwise persuasive argument. For example, a patient who has recently received a diagnosis of cancer, based on some medical tests to which they assign a high degree of subjective probability, might nevertheless fail to be persuaded of their diagnosis due to some deep emotional reluctance to come to terms with their circumstances.
Although non-epistemic mental states are important, it is safe to say that they do not really affect the account of rational persuasion that is being developed. After all, when considering the reluctant cancer patient we would not say that their failure to accept the diagnosis is rational, rather it is an irrational reaction to an otherwise persuasive argument.
Contradictory antecedent beliefs are beliefs that are inconsistent with the conclusion of the argument. Such beliefs may lead one to completely disregard the argument or lessen the impact of the argument on one's overall web of belief. The precise nature of the impact will depend on how strong the antecedent beliefs actually are.
Faust suggests that we can distinguish between core beliefs and peripheral beliefs. Core beliefs are the ones to which we attach a very high degree of subjective probability and which have high epistemic costs associated with giving them up. Peripheral beliefs have much lower probabilities and costs associated with them.
Faust goes on to argue, obviously enough, that beliefs at the periphery are more likely to undergo readjustment or revision in the face of a persuasive argument. Conversely, beliefs at the core are less likely to undergo readjustment or revision. 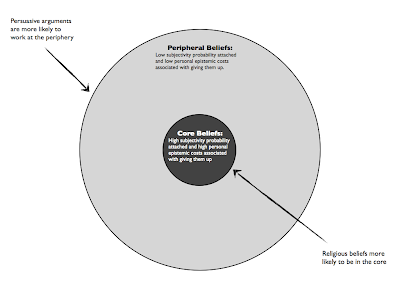 Now the obvious question is which kinds of beliefs are found in the core? The most obvious candidates are beliefs that form the basis of one's overall worldview, such as a belief in the existence of God. Indeed, it is the fact that such beliefs lie at the core that makes persuasive religious argument so difficult to formulate and so difficult to accept. We will consider this issue in part 2.
Posted by John Danaher at 11:11 PM