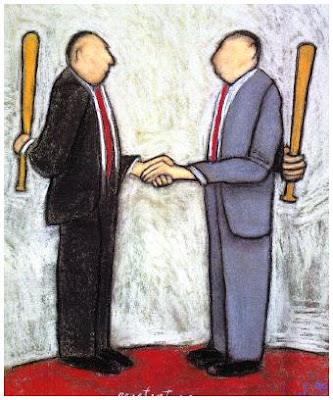 I have recently been pursuing some questions arising from the intersection between bargaining theory and moral and political philosophy.

In a previous post, I argued that many of the most popular uses of bargaining theory in moral and political philosophy are restricted in form. That is to say: they do not attempt to provide a complete answer to the core metaethical questions concerning the ontological basis of moral truths. Instead, they attempt to show how one set of moral judgments can be derived from another set of rational and moral intuitions and principles. This is certainly a valuable endeavour, but it is obviously incomplete.

In this series, I want to look at David Gauthier's unrestricted use of bargaining theory. This will be based on his book Morals by Agreement

. This first post will look at the basic methods and concepts that lie behind Gauthier's thesis.


1. A Metaethical Inquiry?
Gauthier's stated goal is to find out where morality comes from. This is a quintessentially metaethical goal: it does not focus on normative ethical questions such as "Should I eat meat?"; it focuses on questions about the ontological significance of normative statements such as "This state of affairs is good/bad".

To pursue his goal, Gauthier follows the platitude-to-state-of-affairs methodology that I have discussed before. This methodology begins with a set of platitudes about moral truths (derived from the agreed-upon semantics of moral terms) and checks to see whether any actual state of affairs would satisfy those moral platitudes. In Gauthier's case, the relevant moral platitude is the impartial nature of moral oughts: he thinks that the distinctive feature of moral prescriptions is that they are not tethered to the beliefs and desires of any particular agent.

One might think that focusing on this single moral platitude could lead to an impoverished account of morality. I am inclined to agree, but I am willing to take Gauthier's point that impartiality is central to most people's understanding of what successful moral theory would contain.


2. Rationality and Morality
In pursuing his metaethical goal, Gauthier tries to show the "deep" connection between rationality and morality. To be precise, he tries to show how moral prescriptions are simply a proper subset of rational prescriptions. This is what makes Gauthier's account different from the restricted approach I was considering earlier. Those accounts tried to combine sets of moral and rational prescriptions without questioning the relationship between them.

Rationality is as good a place as any to locate the foundations of morality because a theory of rationality has a sort of inbuilt normativity to it. After all, a theory of rationality will specify the kinds of things that motivate and provide an agent with reasons for action. Furthermore, the theory will have some connection with empirical reality as it will attempt to capture the process of practical reason that is embodied in actually existent agents.

Gauthier notes that there are two ways to develop the deep connection between rationality and morality:

Although some have argued that Gauthier is seriously confused in his understanding of rationality, there are advantages to his approach over the Kantian one. Chief among them is the fact that the social science account of rationality has been formalised in (often painstaking) mathematical terms, and has some empirical support and tractability (although this is certainly questionable).
3. Rational Choice and Cooperation
Cooperation and coordination are essential to society. Indeed, they are the glue that binds society together. In addressing the possibility of impartial moral prescriptions, Gauthier zones in on a particular type of cooperative problem that befalls society, namely: the Prisoners' Dilemma (PD).

Many will be familiar with this problem from the famous story told about the two prisoners who are in separate holding cells, and who are each told they can avoid jail-time if they rat out the other guy. The problem is that if they both rat each other out they get a lengthy jail sentence, whereas if they both stay silent they get a short jail sentence.

Although this story is memorable, it is important to realise that the PD is a general form of cooperative problem, not something that only applies to the specific set of circumstances in the story. To make this point, the diagram below (click to enlarge) describes a PD that has arisen in professional cycling. I took this from an article by Michael Shermer that appeared some time back in Scientific American. 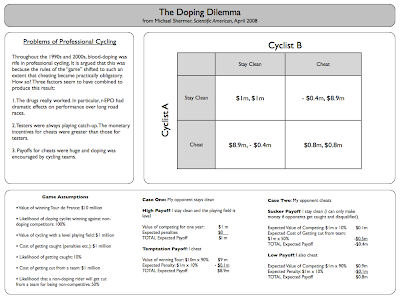 The important features of the PD, for Gauthier's purposes, are the following:


One may wonder: why does Gauthier focus on the PD? There are, after all, other types of cooperative problems that do not have these features and that can play an equally important role in social life.

As it happens, I think there is a good reason for Gauthier's focus on the PD. Because it has the two features just described, the PD is the ultimate testing ground for a rationalistic account of impartial moral prescriptions. Why? Because the standard analysis of the PD is that rational players, who seek to maximise their utility, should choose mutual defection over mutual cooperation. This is because mutual defection ensures the maximum payoff, no matter what anybody else does.

4. Gauthier's Solutions
So in order to succeed, Gauthier must show how the standard decision-theoretic analysis of the PD is wrong and how mutual cooperation is, in fact, the rational strategy. He must then go on to show that the actual distribution of the cooperative surplus is impartial in form.

Gauthier tries to do this by presenting two key revisions of rational choice theory and bargaining theory. They are:

I'll cover both of these concepts in later entries.