What originally began as one post on the various principles of distributive justice has quickly morphed into a series on bargaining theory and the social contract. In a previous post, I tried to explain Nash's bargaining solution.

In this post, the Nash bargaining solution will be used as the basis for understanding the difference between egalitarian and utilitarian social contracts. The discussion is based on Chapter 2 of Ken Binmore's Natural Justice.


1. The Social Contract and The Meeting Game
Societies are frequently called upon to solve coordination problems. These are bargaining problems where people need to coordinate their behaviour in order to achieve some mutually advantageous result.

I always refer back to Thomas Hobbes to explain this concept. Hobbes argued that in a "state of nature" (i.e. a state without a social contract) humanity would be trapped in an unending cycle of violence ("the war of all against all"). This could only be avoided if each individual gave up certain rights and agreed to create a strong central authority with a monopoly on violence (the Leviathan). Hobbes was thus arguing that there is a mutually advantageous result (avoiding the unending cycle of violence) that can only be achieved through coordinated behaviour. Achieving the necessary coordination is the purpose of a social contract.

The key moral question arising from this is the following: if there are gains to be made from coordinated behaviour, how are those gains to be distributed among the parties to the agreement?

We can use a very simple example of a coordination problem to explore the possible answers to that distributive question. The example is the Meeting Game:

Alice and Bob, who met through an online dating agency, have agreed to meet each other for the first time. They have ten possible locations at which they could meet. Although they are both eager for the meet-up, they have differing views on the most desirable location (this could be due to transportation, desire for publicity, ease of "bail out" etc.). Indeed, two locations are so undesirable to at least one of the players that they would rather not meet at all than meet there. Alice and Bob need to agree upon some meeting point.

The table below represents their respective payoffs for the different locations as well as the status quo payoffs (i.e. what the parties get if they don't agree to some meeting point). 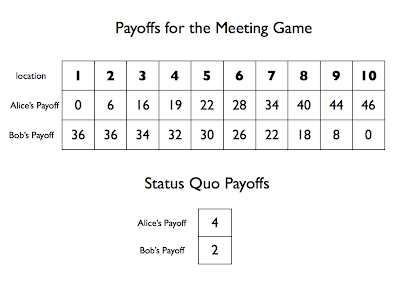 It should be obvious from this that Alice would prefer not to meet than to meet at location 1; ditto for Bob at location 10. All other locations are on the negotiation table as they would lead to at least some gain over the status quo. To fit this in with our discussion of the social contract, we can think of the status quo as being equivalent to the state of nature.

The meeting game can also be represented geometrically, as in the following diagram (see this post for more on what such a representation is intended to show). 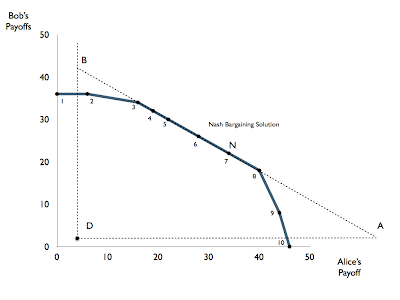 The blue curve with the ten marked points represent the ten solutions to the game (corresponding with those in the table). The point D represents the status quo or state of nature. If we assume the parties have equal bargaining power, we can easily locate the Nash bargaining solution. It occurs at the point N, which is where the product of gains over the status quo is highest,


This is higher than any of the nearest rivals. For example, at points 6 and 8, the product of gains over the status quo is,

2. Adding some moral content: The Original Position
The Nash solution outlined above has no moral content. It says that a certain solution to the coordination will be reached under a particular set of assumptions. But it does not say whether that solution is fair or morally good.
The amorality of the solution is apparent once you realise (according to Nash's assumptions) that if the scales used to measure each player's utility are recalibrated, the solution remains the same. So for example, if we change Alice's payoff scale so that each unit is now worth twice what it used to be worth, the solution is still the same even though she now gets double the satisfaction. This would strike many as being deeply unfair since it fails to take into consideration how the benefits of coordination are distributed. But under Nash's theory it can't be otherwise, as Binmore puts it:

Players can't alter their bargaining power by changing the scale they choose to measure their utility, any more than a physicist can change how warm a room is by switching from degrees Celsius to degrees Fahrenheit.

There are ways to add some moral content to the Nash solution. Binmore considers one such way: using the device of the original position. The original position, as many know, comes from the work of John Rawls. Rawls argued that, in order to assess the justice of a given distribution of social goods, we have to ask whether we would agree to that distribution if we were bargaining from behind a veil of ignorance. This is the "original position".

The veil of ignorance prevents us from knowing where we will end up in society. In the example of the meeting game, this would mean that Alice and Bob have to negotiate their agreement without knowing which one is Alice and which one is Bob. In other words, with the possibility that their identities are randomly reassigned after the agreement is reached. As a result, whatever agreement each proposes will need to keep in mind both sets of payoffs.

The original position allows for complete impartiality when negotiating over possible schemes of distribution. If one thinks that impartiality is morally desirable, it constitutes the addition of a moral component to our understanding of the Nash bargaining solution (and the social contract).


3. The Need for Social Indices
In order for the original position to play a meaningful role in how we think about coordination problems such as the Meeting Game, there must be some way to compare the utility functions of different individuals (i.e. to allow for interpersonal comparison). This is what makes it legitimate to think about the reassignment of identities after the agreement.

Unfortunately, the standard method for deriving utility functions does not allow for such interpersonal comparison. This is because, as mentioned previously, the scales chosen for personal utility functions are arbitrary. We cannot say they are the same from person-to-person. The temperature analogy works again here: it would not be possible to compare temperature measurements across different locations if one did not know which temperature scale was being used. The same holds for utility functions.

Binmore argues that what we need is a "social index". This would allow us to say how much one of Alice's utils is worth in terms of Bob's utils, i.e. it would allow us to determine the ratio of Alice's utils to Bob's. The social index would represent society's total judgment on the relative worth of the two individuals. There could be a huge number of factors influencing such a judgment, but from a game theoretical perspective all that matters is the ratio.

(Note: John Harsanyi has an argument -- or a bit of "dogma" if you prefer -- which suggests that if the parties have access to the same information we can legitimately assume they have the same utility functions. Binmore thinks our capacity for empathy may allow for this. Make of it what you will.)


4. Utilitarian and Egalitarian Solution
Once we have a social index, we can proceed to consider the solution to the Meeting Game that would be reached in the original position. Even here things are uncertain, with two plausible candidates. To examine these, let's assume that the social index makes one of Bob's utils worth two of Alice's.


I. The Utilitarian Solution
A utilitarian would maintain that the best solution (given the veil of ignorance) is the one in which utility is maximised. In other words, the point at which the sum of the index-weighted payoffs is greatest. This occurs at location 3 in the Meeting Game because,


is greater than any of the alternatives e.g. location 4,


This solution is represented geometrically below. 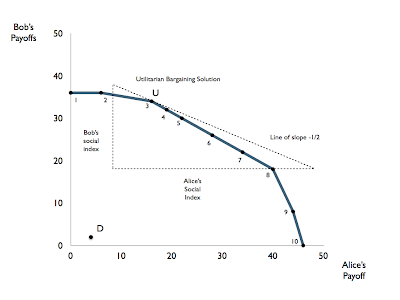 The dotted line of slope - 1/2 moves down one unit for every two units it moves across (I didn't draw this precisely). This depicts the fact that one of Bob's utils is worth two of Alice's. The utilitarian solution occurs at the point where this line touches the boundary of the set of possible solutions.
II. The Egalitarian Solution
An egalitarian (like Rawls) would maintain that the best solution (given the veil of ignorance) is the one that gives each player an equal gain over the status quo.
Obviously, this gain over the status quo need to be weighted for each player in accordance with the ratio of utils. If the ratio was 1:1, the egalitarian solution would occur at location 6, because,


However, in the case where one of Bob's utils is worth two of Alice's, there is no single solution. This can be seen in the geometric representation given below. 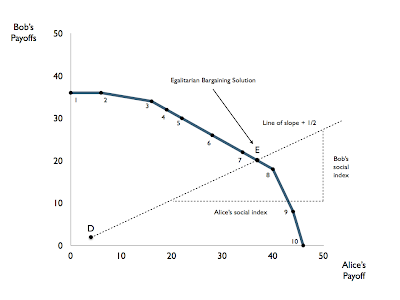 The dotted-line of slope +1/2 through the point D represents the social index. This line only intersects the efficient boundary of the set of possible solutions at the point E, somewhere between location 7 and location 8. The best that Alice and Bob can do is to randomise between the two locations (maybe meeting at location 7 on weekdays and location 8 at weekends).
5. Some Conclusions
This post has shown three things. First, it has shown how the Nash bargaining solution can be used to understand the coordination problems that lie at the heart of the social contract. Second, it has shown how Rawls's device of the original position can be used to inject some moral content into the Nash solution. Third, it has outlined the differences between a utilitarian solution to a coordination problem and an egalitarian solution.
Before finishing up, it's worth noting two important differences between the utilitarian and egalitarian solutions: