Four Concepts of Consent and their Relevance to Sexual Offences 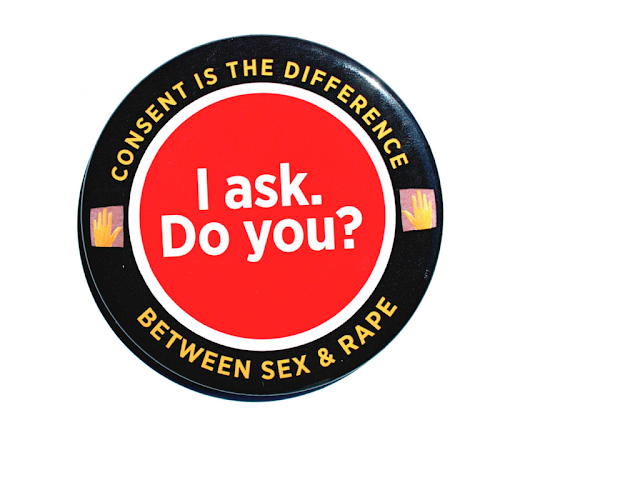 I’ve been focusing on the ethics of consent and sexual relations quite a bit recently. This is to help with a number of papers that I’m working on at the moment. Most recently, I have been looking into intoxication and consent, but I thought I would take a break from that discussion today to take a very brief look at some of Peter Westen’s work on the general concept of consent.

Westen’s 2004 book The Logic of Consent is widely-recommended for its dense and nuanced look at the topic of consent as a defence to criminal charges. I have never read it myself, but I have read a number of reviews and one of Westen’s own papers on the topic. One of Westen’s key contributions to the debate about consent is his attempt to identify the distinct consent-concepts that operate in both the legal and philosophical debates about the nature of consent. Four such concepts feature in his book. I want to share those four concepts in this post.


1. A Motivating Example: The Valdez Case
Philosophical discussions of consent often rely on thought experiments. These hypotheticals help us to tease apart difficult conceptual questions. But there is a limit to their utility. They are often contrived and abstracted from real-world dynamics. Important details and nuances are sometimes papered-over in order to achieve philosophical insight. But that insight is often then limited due to its lack of connection to the real world.

One of the more useful aspects of Westen’s work is that he uses examples drawn from real-world criminal law cases. This helps to anchor the conceptual analysis in something more concrete and practically significant. I’ll use one of these examples to motivate the following discussion about the different concepts of consent. I’m going to describe the facts of this case in fairly neutral terms, despite its obviously horrendous nature:

Valdez Case: This is a case that was decided in Texas back in 1993. It concerned a man named Joel Rene Valdez. He broke into the apartment of a woman named Elisabeth Wilson. He was wielding a knife at the time. He ordered her to take off her pants. Certain that she was either going to be stabbed or raped, she agreed to sexual intercourse if Valdez wore a condom. He did and she offered no further resistance.


Valdez was arrested but a grand jury refused to indict him on the grounds that the victim had consented to the sex. On the face of it this seems absurd. Most of us would agree that this is a clearcut case of rape. But Westen argues that the failure to indict may have been attributable to confusion about the precise nature of consent. This confusion is in turn aided by the fact that different jurisdictions use the term ‘consent’ in different ways in their statutes and laws. Hence, conceptual clarification is needed.

(In case you are wondering, Valdez was indicted by a second grand jury and then sentenced to 40 years. You can read about the case here.)


2. Four Different Concepts of Consent
Westen argues that four different concepts of consent operate in philosophical and legal discussions. These four concepts are organised around three pairs of distinctions. I’ll discuss the distinctions first and then the concepts.

The first pair of distinctions concerns the difference between ‘factual’ and ‘legal’ consent. The former is what is true as a matter of fact; the latter is what is needed to meet the legal test for the application of that concept. A 16 year-old may, as a matter of fact, consent to sexual intercourse, but legally her consent would not be recognised due to her age. Factual/legal distinctions are common in the law. For example, in tort law we distinguish between factual and legal causation. The second pair of distinctions concerns the difference between ‘attitudinal’ and ‘expressive’ forms of consent. The former concerns the subjective state of mind of the victim; the latter concerns the outward signs that were expressive of that state of mind. The third pair of distinctions concerns the difference between ‘actual’ and ‘imputed’ consent. This is somewhat similar to the first insofar as the law sometimes constructs or imputes the presence of consent which is lacking in actuality. The distinctions between law and reality in all instances arise because there can be a difference between what is actually true and what we would normatively prefer to be true. Hence, underlying all three of these pairs of distinctions there is a larger distinction between factual and prescriptive understandings of consent. The former try to accurately describe objective and subjective facts about the victim; the latter try to prescribe certain conditions that must be met in order for consent to be legally valid.

Though technically one could have several different combinations of these distinctions, in reality four tend to dominate in legal and philosophical debates about the nature of consent. The first two are:

Factual Attitudinal Consent: This type of consent is concerned purely with the victim’s subjective state of mind. Did she assent to what was happening to her (all things considered)? According to Westen, the victim in the Valdez case consented in the factual attitudinal sense of the term. Her all-things-considered preference was, at the time, to have protected sexual intercourse with Valdez. She preferred this to the alternatives of being stabbed or running the risk of contracting HIV.


Factual Expressive Consent: This type of consent focuses on the objectively observable signals or indicators of the victim’s subjective attitude. Did she clearly communicate (verbally or non-verbally) her assent to what happened to her? There can be much debate about what counts as a clear communication of consent, but, again, in the Valdez case it would appear that we have factual expressive consent. The victim communicated a willingness to engage in sexual intercourse if a condom was worn.


Westen suggests that the reason Valdez was not indicted first time round was because the grand jury worked with a purely factual conception of consent. The reason for finding this failure outrageous has to do with the incorporation of prescriptive conditions into general definitions of consent. When we think about consent from a prescriptive perspective, we don’t just care about what the victim’s attitudes and expressions happened to be at the relevant time. We also care about how they acquired those attitudes and expressions. This gives us Westen’s third concept of consent:


In the prescriptive sense, it is clear that the victim in the Valdez case did not consent to the sexual intercourse. She was forced into her factual attitudinal and expressive consent by the threat of violence. This brings us finally to Westen’s last concept of consent:


Informed and imputed consent are not hugely relevant in the debate about sexual offences. They are more common in medicine. But constructed consent can, and historically has, played a role in sexual offences. Westen argues that the infamous marital rape exemption (which held that a husband could never be guilty of raping his wife) involved constructed consent. The idea being that in consenting to marriage the wife had also irrevocably consented to sex with her husband. Obviously, we no longer accept the normative rationale underlying this type of imputed consent. (Note: I have some doubts about this example simply because I am not sure whether a wife’s original consent to marriage was deemed to be important during the heyday of the marital exemption)

I have mapped out the four concepts of consent below. This gives a better sense of the conceptual territory that Westen describes. 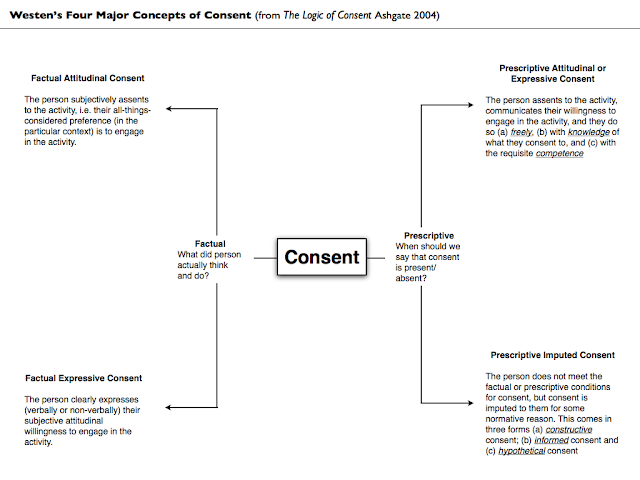 3. Conclusion
Conceptual clarifications of the sort undertaken by Westen can sometimes be more frustrating than illuminating. Nevertheless, I think there is some genuine utility to the four-part distinction. The main reason for this is that once you appreciate the distinctions you gain a better understanding of the problems that arise in the criminal law. Consent is central to the definition of all the major sexual offences. Ideally, we would want that concept to be understood in prescriptive terms. But in some jurisdictions the concept of consent is left incompletely or imperfectly defined. This creates confusion when juries (and judges) are asked to determine whether or not a victim consented to some sexual act. They may often interpret it in factual terms, when they ought to be interpreting it in prescriptive terms.
Posted by John Danaher at 5:07 PM