Intoxicated Consent to Sexual Relations: A Map of Moral Claims

Consent is moral magic. It transforms an impermissible act into a permissible one. But deciding when and whether to respect a particular token or signal of consent is an ethically fraught business. Can children consent to medical treatment? Can adults with early stage dementia consent to give away all their earthly possessions? Is a smile or a nod sufficient for consent? Is it possible to consent to something by doing or saying nothing? Can you consent to have something done to you while you are asleep, if you provided the consent in writing in advance? Questions of this nature abound.

One of the most contentious of all these questions has to do with the correct attitude toward consent to sexual relations that occurs when one or more of the parties to a particular sexual encounter are voluntarily intoxicated. To take a typical and all-too frequent case, suppose that Ann and Bob meet at a party. Ann has voluntarily consumed several alcoholic drinks. Nevertheless, she seems alert and aware of what is going on. Bob starts talking to her. She seems to enjoy his company and later on he asks her if she wishes to come back to his apartment. She says yes. When they get back they start kissing. She asks him if he has a condom. He says he does. They then engage in sexual intercourse.

Was this sexual activity morally permissible? That’s the question I wish to explore in the remainder of this post. Throughout, I will approach the topic from a heterosexual and gynocentric perspective. In other words, I will interpret it to mean ‘was it permissible for Bob to have sex with Ann?’ This makes sense given that the story says nothing about Bob’s level of intoxication, and it also makes sense given that this is the typical direction from which the issue is approached in law and popular culture. Sexual violence has historically been a predominantly male-to-female phenomenon.

To answer the permissibility question I’m going to enlist the help of Alan Wertheimer’s excellent article ‘Intoxicated Consent to Sexual Relations’. It is a long and thoughtful analysis of this issue, brimming with interesting arguments and insights, a real model of the conceptual-empirical analysis I like in contemporary philosophy. Unfortunately, there is so much to the article that there is no way I can cover it all in one blog post. Hence, I’m going to write a series of connected but standalone pieces on Wertheimer’s article. In the remainder of this post, I address two issues. First, I try to clarify exactly what it is that Wertheimer is interested in. And second (and probably more interestingly) I map the space of possible claims one could make about this topic.


1. What is intoxicated consent to sexual relations?
Put simply, the permissibility question that I asked at the outset has to do with the case in which a woman signals consent to sexual relations whilst voluntarily intoxicated. That is why the story I told had such a simple and relatively uncontroversial structure. For example, I said nothing about whether Ann woke up the following day and could not remember the sexual encounter. Nor did I suggest that Bob repeatedly offered her drinks during the course of the evening. Those kinds of details often feature in real-life cases, and they can make the moral calculations both easier and more complicated. But they are not relevant to this discussion. To appreciate this, three clarifications are in order.

First, this discussion is only about voluntary intoxication. It is not about involuntary intoxication. If Bob had plied Ann with or forced Ann to consume alcohol prior to the sexual activity, the moral status of that activity would be much more straightforward. It would be clearly impermissible since Bob could be said to have either deliberately or recklessly used the intoxicant to weaken Ann’s capacity for consent.
Second, this discussion assumes that there is some unambiguous signal of consent being given by the voluntarily intoxicated party. This is a significant assumption. I have written previously on the problems with setting standards in relation to the signals of consent. Do you need a clear verbal signal of willingness to continue with an act? Or is an absence of unwillingness sufficient? Should we adopt a ‘no means no’ standard of consent? Or should we go with a ‘yes means yes’ standard? These questions deserve attention, but they are being bracketed for present purposes. Also bracketed are any concerns relating to deception, fraud or coercion on the part of the other individual.

Third, and finally, this discussion is only interested in intoxicated consent. This should be distinguished from a related phenomenon, which Wertheimer refers to as substance-affected consent:

Substance-affected consent: Arises when A takes some substance and later consents to sexual activity and ‘but for’ their consumption of this substance, they would not have consented to the activity.


Intoxicated consent: Arises when A takes some substance and later consents to sexual activity, and the substance in question causes them to consent to an activity that is not consistent with their stable higher order preferences and desires.


Substance-affected consent is, presumably, common and oftentimes uncontroversial. If Ann had a headache but took some headache pills before she went to a party where she met Bob who she really wanted to have sex with, then it may be that her consumption of the headache pills was an integral part of the causal chain leading to her subsequent consent to sexual activity. But it doesn’t seem like her subsequent consent is ethically problematic. It is only when the consumption of the substance tips over into intoxication that things become problematic. In the intoxicated state, Ann may consent to something that is out of keeping with what she really wants. The borderline between substance-affected consent and intoxicated consent might be difficult to determine in many real-life cases, but again we are bracketing that difficulty in this analysis. We’re assuming that we are dealing with cases in which the consent is of the intoxicated variety.


2. Intoxicated Consent and the Space of Connected Moral Claims
Now that we have clarified the phenomenon of interest, we can proceed to consider the different possible claims one could make about the ethical status of intoxicated consent. This is where Wertheimer makes one of his more useful contributions to the debate. He identifies five, interconnected, moral claims that are often bandied about in the literature:


The Impermissibility Claim: It is impermissible for B to have sex with A whilst A is voluntarily intoxicated, even if A has signaled consent (there is also the complementary ‘permissibility claim’)


The Responsibility Claim: A is a responsible for acts they perform whilst voluntarily intoxicated.

This might sound rather convoluted, but the relationships between the claims is illustrated by the diagram below. 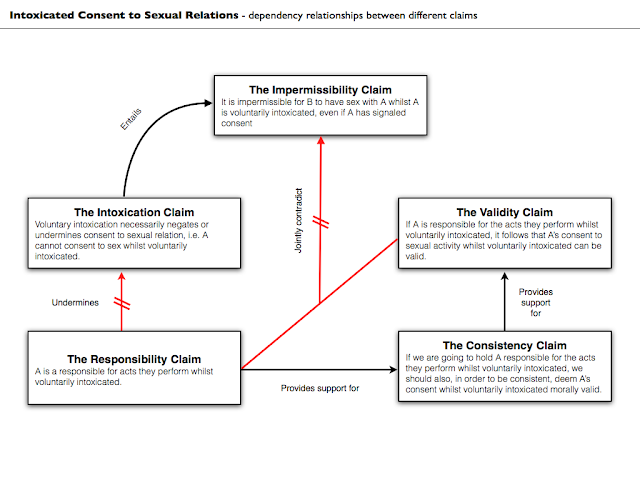 Wertheimer’s own view is that the responsibility claim is correct (and hence the intoxication claim should be rejected). Nevertheless, he is more iffy about the validity claim. It seems wrong to suggest that if someone is voluntarily intoxicated they are somehow morally responsible for what happens to them. He thinks that the permissibility of intoxicated consent depends on a whole range of other factors that are imperfectly captured by this simple map of the logical space of moral claims. His view is an interesting one, and I hope to explore some more of its details in future posts. That’s all for now.
Posted by John Danaher at 10:00 AM