Tweet
(Previous entry - should probably be read to understand the context)

If you voluntarily consume alcohol and then go out and commit a criminal act, should you be held responsible for that act? Many people seem to think that you should. Indeed, within the criminal law, there is an oft-repeated slogan saying that “voluntarily intoxication is no excuse”. In other words, someone cannot simply avoid criminal liability by intoxicating themselves prior to committing a criminal act. There is, however, some leeway in this. The criminal law distinguishes between crimes of basic and specific intent, and intoxication may undermine specific intent, but this still would not allow someone to completely escape liability. For example, murder is classed as a crime of specific intent, and so it may be possible to avoid a murder charge if you can prove you were so severely intoxicated at the time as to lack specific intent, but the lesser charge of manslaughter would still apply.

This all seems sensible, but it leads to some problems when dealing with sexual offences. Alcohol and intoxication play a significant role in many sexual encounters. Suppose Ann and Bob meet at a party, where they have both been drinking heavily. They seem to enjoy one another’s company, and Bob invites Ann back to his apartment. He asks her if she wants to have sex. She nods her head. They proceed to have sexual intercourse.


1. Two Traditional Arguments for Responsibility whilst Intoxicated
At the outset, it is worth remembering Wertheimer’s definition of intoxicated consent. He holds that intoxicated consent arises when someone takes a substance that causes them to act in a manner that is not consistent with their higher order preferences and desires. This is distinct from mere substance-affected consent, which arises when a substance is consumed that causes an action to be performed that would not otherwise have been performed, but which does nothing to disturb one’s higher order preferences.

Following this definition, there seem to be at least three ways in which someone could perform an act, or consent to something, whilst voluntarily intoxicated. First, they could deliberately cause themselves to become intoxicated because they wish to act in a manner that is not in keeping with their higher order preferences and desires. We could call this the Ulysses case since it is redolent of the story of Ulysses tying himself to the mast of his ship so that he could hear the Sirens’ song. There is probably a paradox involved in this case since if someone wishes to do something that is out of keeping with their higher order preferences and desires, does that not suggest that they are acting in accordance with an even higher preference? The Ulysses case should be contrasted with the reckless indifference case, which is where someone becomes intoxicated and they are well aware of the risk that they might act in a (specific) manner that is out of keeping with their higher order preferences and desires, but they choose to run that risk anyway. It should also be contrasted with the unexpected outcome case, where someone does something whilst voluntarily intoxicated that was genuinely beyond the realm of reasonable expectation. 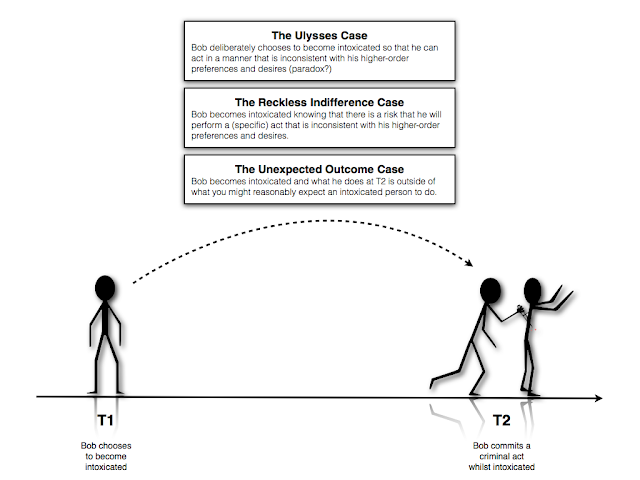 These three cases can be treated differently when it comes to assessing the responsibility claim. I suspect most people will feel that a person should be held responsible for actions performed whilst intoxicated in the Ulysses and reckless indifference cases. The unexpected outcome case is trickier. I would have more sympathy for someone in this predicament, but I think the outcome would really have to be beyond the realm of reasonable expectation.

Anyway, the important question is why do we think that people should be held responsible for (at least some) of the actions they perform whilst voluntarily intoxicated? Wertheimer identifies two arguments made by the legal theorist Heidi Hurd. The first is the reasoning argument:


This is hastily constructed, but it is based on R.Jay Wallace’s theory of responsibility, which holds that the capacity to grasp and appreciate moral obligations is central to moral responsibility.

The second argument from Hurd is the so-called incentive argument:


This argument is consequentialist in nature. It is based on the belief that if you excused criminal behaviour committed whilst the offender was voluntarily intoxicated, you would be effectively writing a blank cheque for future criminals. They would then know that all they had to do to absolve themselves of responsibility would be to get blindingly drunk prior to committing a criminal offence.


2. Criticisms of the Two Traditional Arguments
Are these two argument sufficient to explain our willingness to hold intoxicated people responsible? Wertheimer has his doubts. There are two problems with the reasoning argument. First, while it may well be true that most intoxicated people have the ability to grasp and understand moral reasons for action, this doesn’t suffice to explain cases in which we are willing to hold them responsible even if they were completely unable to reason. Imagine a case. Bob drives to a party and gets blindingly drunk. His intoxication is such that he is no longer able to guide his conduct in accordance with moral reasons for action. He gets into his car and drives home. Along the way he mows down a pedestrian named Ann. She dies from her injuries the following morning. Do we hold Bob responsible for his actions? Wertheimer thinks we would, even though he may not have had the capacity required by Hurd and Wallace’s argument. (If you don’t feel the intuitive pull of that case, imagine an alternative one in which Bob deliberately chooses to get so drunk at T1 that he knows he will then drive home in a state that absolves him of responsibility under Hurd and Wallace’s account - is he responsible then?). The second problem with the reasoning argument is more serious. It actually has nothing to do with voluntary intoxication. On this account, all that matters is that the capacity for moral reasoning is intact (or not). If a person is involuntarily intoxicated, but still able to grasp and understand moral reasons for action, they would still be deemed responsible. How they got to their present state is irrelevant.

If these two arguments are problematic, are there any others that might justify holding people responsible for what they do whilst voluntarily intoxicated?


This might sound like a repeat of what I just said about the abstract nature of the tracing condition, but there are some subtleties hidden within it. According to the flow through view, there is an intimate connection between the opportunity for control at T1 and the future act at T2. The opportunity for control at T1 must be such that it allowed for the prevention of the later act. Furthermore, according to the flow through view, moral responsibility is a diachronic phenomenon, not a static or synchronic phenomenon. Your responsibility for action at any particular moment in time is never completely dependent on how you acted at that moment in time; it is dependent on how you acted across connected moments in time.

The Dual Self View: If agent B1 chooses to become voluntarily intoxicated at T1, in such a manner that agent B2 acting at T2 is nonresponsible, then we may hold agent B1 responsible for the decision made at T1.


Here, we are holding someone responsible for what they did at the earlier time (which may have been causally necessary for what happened at T2), not for what they did at the later time. The responsibility does not flow through time, but we may still be justified in ascribing blame. For example, if their choice at T1 was motivated by something like the motivations mentioned in the Ulysses or reckless indifference cases I mentioned above, then it seems like blame could attach for what they did at T1. Furthermore, that blame would have some link to the quality of act performed at T2.

Wertheimer says he isn’t sure which of these two theories are correct, but he thinks that they are much better able to account for the belief that the voluntarily intoxicated are responsible than the reasoning or incentive arguments.